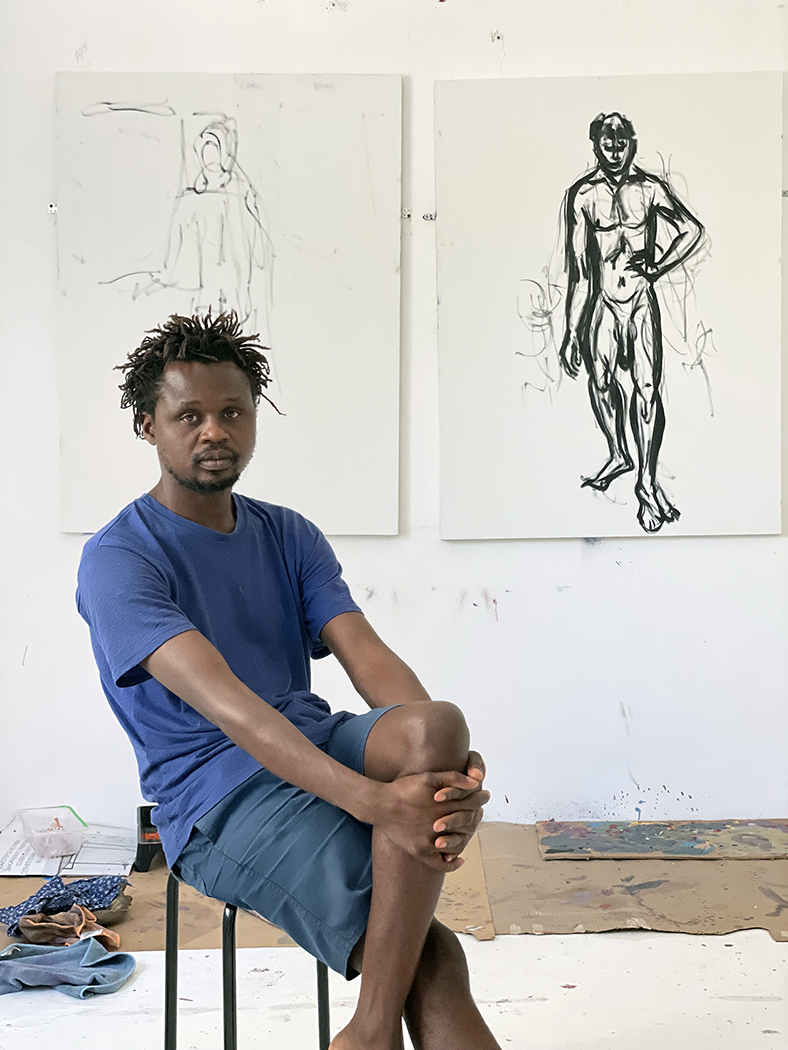 Admire Kamudzengerere’s work explores identity, politics, and society, often informed by the multifaceted structural and social issues that have marked Zimbabwe’s last decade. Working in various media, he frequently reveals an unequal world in which the powerful ride roughshod over the weak.

Kamudzengerere completed the Rijksakademie van Beeldende Kunsten program in Amsterdam (2012). He mounted his first solo exhibition at Catinca Tabacaru New York in 2017, and that same year represented Zimbabwe at the 57th Venice Biennial. His work has was included in four additional international Biennials: Moscow (2013), Bamako (2017), Dakar (2018), and Cairo (2019). In the past two years he has been awarded two art fair prizes, the Purchase Prize by Northern Trust at EXPO Chicago (2017), and On Demand Prize by Snaporazverein at MiArt Milan (2018).

In addition to private collections around the world, Kamudzengerere’s work has been acquired into the permanent collections of the National Gallery of Zimbabwe, the Block Museum at Northwestern University, and The Art Institute of Chicago.

Inside/ out, Catinca Tabacaru, New York

I am gonna…you. Till you run., Catinca Tabacaru, New York

Past and Present – A Retrospective Insight, Gallery Delta, Harare, Zimbabwe

On Demand by Snaporazverein, miart, Milan; presented by Tyburn Gallery

Artist Talk w/ Admire Kamudzengerere
Join Admire Kamudzengerere as he discusses his joint exhibition, Haipere nyaya yacho, and the wider process of living and working in Bucharest’s post-communist environment which led him down a rabbit hole of exploring the many connections between the African continent and communism.
December 2, 2021 | 6.30PM

Rachel Monosov & Admire Kamudzengerere
Who Says, Who Shows, What Counts: Thinking about History with The Block’s Collection
The Block Museum of Art at Northwestern University, IL
Sept 22 – Dec 5, 2021

Rachel Monosov and Admire Kamudzengerere in AnOther
Ten Photographers to Have on Your Radar in 2019
5.10.2019

Rachel Monosov and Admire Kamudzengerere in British Journal of Photography
Ten photographers have made it into the shortlist for MACK’S 2019 First Book Award
2.22.2019

1972 in The Herald
“…the notion of identity; it occurs in fractured history, re-imagined pasts and the errors of tradition, once it is perceived from the alien lens…”
5.21.2018

1972 in HYPERALLERGIC
“Catinca Tabacaru, which has galleries in both New York and Harare, Zimbabwe is displaying the work of Admire Kamudzengerere and Rachel Monosov, two artists who are represented by the gallery and who together had developed a semi-fictionalized project, 1972, to explore interracial marriage in Zimbabwe. Their project plays fast and loose with back-dated documentation and personal testimony to insert their “marriage” (which may or may not be legal) into the official governmental records of the country.”
5.5.2018

1972 by Rachel Monosov and Admire Kamudzengerere in COLLECTOR DAILY
“The entire backstory to this project is so intricately crafted that the series resonates with impressively brainy intelligence.”
4.5.2018

Admire Kamudzengerere and Rachel Monosov: 1972 in New York Magazine
“It was a time of great racial unrest, and interracial marriage was still illegal. “We took the most problematic moment in history, and we’re changing it and saying, this existed as well,” said Rachel.”
3.26.2018

Rachel Monosov and Admire Kamudzengerere: Transcultural Protocol in Contemporary&
“Here he talks about why dance is so important in life and how performance can be an excellent vehicle to explore serious issues.” – Will Furtado
12.8.2017

10 Must-See Galleries at Expo Chicago in Chicago Tribune
“…the New York gallery was selected by curator Justine Ludwig as a young gallery to watch… it presents unhinged silkscreens by Admire Kamudzengerere and stunning multimedia projects from Rachel Monosov.” – KT Hawbaker
9.13.2017​

Admire Kamudzengerere and Rachel Monosov in The Nation
“As anger still looms over Dana Schutz’s painting of Emmett Till in this year’s Whitney Biennial—and many forms of discrimination continue to trouble our country and others—Kamudzengerere and Monosov staged a performance of aggression to take place right before people’s eyes.” – Alina Cohen
5.26.2017

Admire Kamudzengerere in The Wall Street Journal
“Zimbabwe’s artist are gaining major traction among collectors in Africa and beyond right now.”
5.8.2017

1972 in WEPRESENT
“By making up this extraordinary story of an unlikely couple sharing their lives together during a time of political turmoil, Rachel and Admire want us to ask ourselves what images will define our present moment?”
4.18.2018

Admire Kamudzengerere in Forbes
“Kamudzengerere has gone on to create a powerful and broad archive of work that consists of painting, drawing, performance and video.” – Adam Lehrer
3.27.2017​

Admire Kamudzengerere in C&
The result is a series of dark portraits, sometimes made by a single line.
3.15.2017