Taking its title from the 1968 Jimi Hendrix song, Little Miss Strange reimagines antiquity’s psychedelic pioneer, the Oracle of Delphi. Stoicheff’s work mines her Greek heritage, focusing on mythology and its astronomical complements. Paradoxical to the misogyny typical of the Hellenic canon, the female Oracle was not only a heroic figure, but the locus of power beyond even the purview of the gods. Stoicheff sees the Oracle as allegory for the mysteries and complexities collectively associated with the feminine.

Occupying the gallery’s main space are two monumental paintings. The Oracle herself, imagined as an eight-foot tie-dyed monolith painted in-the-round, stands in the center of the floor. Filling the largest wall, the Oracle’s HQ—the Temple of Apollo—is present as a vivid nineteen-foot-wide painting on canvas and velvet, Stoicheff’s largest work to date. Also on view in the gallery’s back room is, fittingly, the secret back door​ of the temple, comprised of thirteen bewitching studies of the chasms and valleys of Greece’s Mount Parnassus. 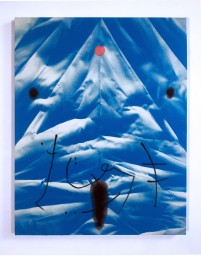 In Little Miss Strange, Stoicheff carries on her inventive practice incorporating sewing with traditions of painting. She begins by either adding or removing color from canvas and velvet with oil paint, ink, dye, or bleach. The paintings are allowed to develop freely, with the whole working process recorded on their surface, from brush wiping and color testing to intentional gestures and traditional picture-making. The resulting works are bountiful; expressive traditions of American post-war abstraction congress with articulated rectangles—paintings within paintings—calling to mind icons on a computer screen or snapshots tacked on a wall. Elsewhere, ruffles and chainette fringe pour forth from seams. Both finely detailed and unreserved, the work is at once intimate and boldly open—engendering a lively immediacy while also inviting a closer look.

With this show, Stoicheff continues and expands her exploration of materiality and image—combining the unpredictability of abstract processes with the nuances of picture-making. Her practice telegraphs an infatuation with the many things that paint can do, and that painting can be. Like the character who inspired them, these works are forces of nature; recalling a powerful, mysterious female with   powerfully mysterious paintings.