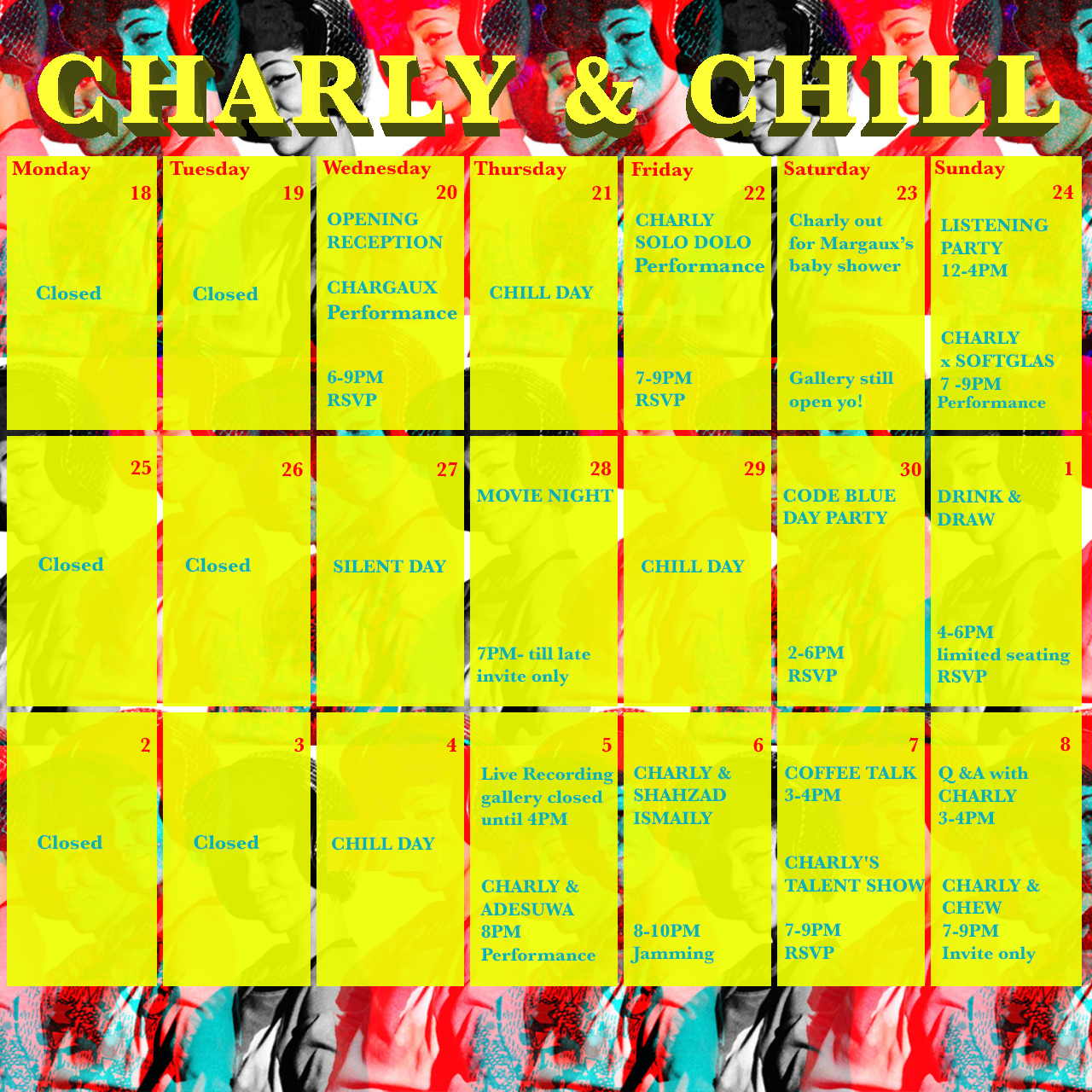 Charly & Chill, a multidisciplinary show of new paintings, music performances, discussions, and chill happenings by Brooklyn-based artist Jasmin “Charly” Charles. An accomplished composer and painter Charly brings together her various practices throughout this in-gallery residency, reflecting the Gallery’s continued interest in what lies beyond and between the lines of art world practices. Charly’s contagious energy is reflected in her works, emulating happiness, and vibrant colors. Sourced from Peruvian headdresses, personality tests, inter-worldly communications, past lives, and other dangerous pursuits, Charly’s work, aesthetic, and very presences, is electric. Throughout the show, visitors to the gallery will find Charly painting, composing music, jamming with her friends, or chilling pretty.

Charly describes her practice as a search for balance depending heavily on improvisation. “I consider improvisation my musical strength and also my survival method for finding my way through the streets of six cities: Miami, Atlanta, New Orleans, Houston, Boston, and New York. From those experiences, I learned survival is not coincidental, and neither is improvisation; both require honed proficiency.”

Identifying as a tetrachromat and synesthete, Charly detects slight differences in tints and shades, as music causes the involuntary seeing and feeling of colors. Her original compositions, whether in music or painting, are reflections of her personality: “moody happy, potent, with a side of funk,” says show curator Raphael Guilbert.

Opening the Residency with a signature performance by CHARGAUX, the violin/viola duo of Charly and Margaux sets the tone for the weeks to come. With a full calendar of happenings, one more vibrant than the next, a few highlights include: CODE BLUE, a day party on Saturday, April 30th, 2-6PM, brings in Charly’s Texas roots as she paints to mixed Southern Trap mixed by AntBLUEJr. On the May 5th, the gallery becomes a recording studio. With the doors locked until 4 PM and visitors only able to watch through the fishbowl, Charly will compose and record a track with ADESUWA, the electro-soul​ based duo and a fellow Texas transplant. Later that evening as the gallery re-opens its doors to the public, the artists jam and perform the brand new tune.