Bucharest-born curator and cultural practitioner Catinca Tabacaru recently moved her gallery from New York City to Bucharest. She is a co-founder of the CTG Collective and has played an equal role with Monosov in the Collective’s projects.

Berlin-based artist and curator Rachel Monosov is a co-founder of the CTG Collective, playing a central role in the conception, planning, and managing of the Collective’s projects, including CTG-R, an traveling international art residency program.

Through its co-founder, Daniela Palimariu, Bucharest-based Sandwich Association has developed itself into one of the most exciting and courageous artist-run spaces in the city. 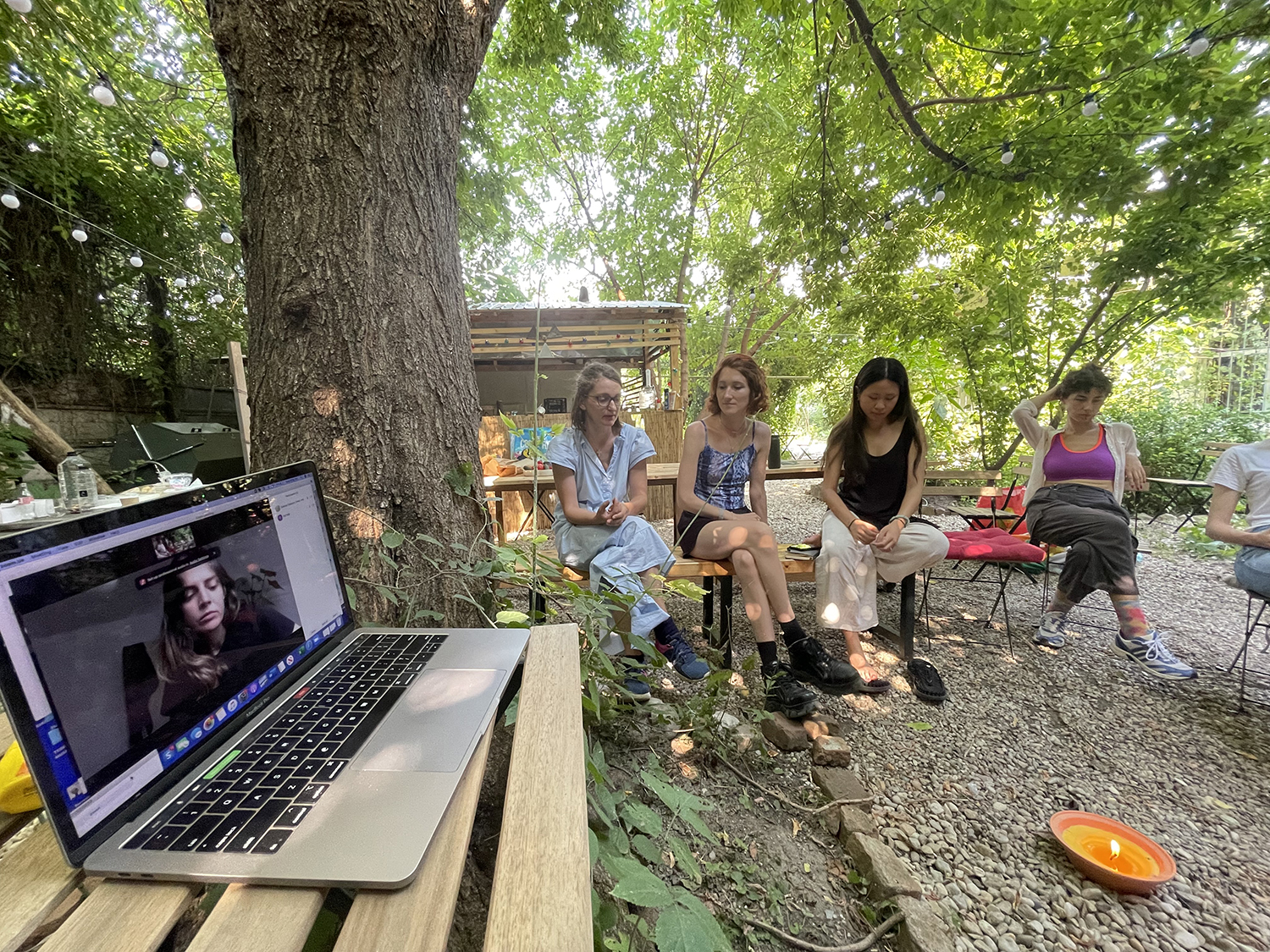 The group discussing Motherhood, at The Legacy, Bucharest.

How did we arrive to NOW?

The Staycation dialogues moved aside the abstract nature of the artist’s situation during the Covid-19, the restrictions of which definitely pushed the artist’s working conditions faster into a crisis mode, and instead, we elaborated in group-led discussions on the meaningful cultural and social experiences rooted in the physical, with the artists’ awareness and personal narrative highlighted in the exchange.

Hosted by The Legacy, a hub for ethical entrepreneurship in Bucharest, we came together to share those deeper identities we develop throughout the relationship between art and life, such as motherhood, the maternal avenue that can connect us, all the while stigmatising our image within an artworld context that valued us before. 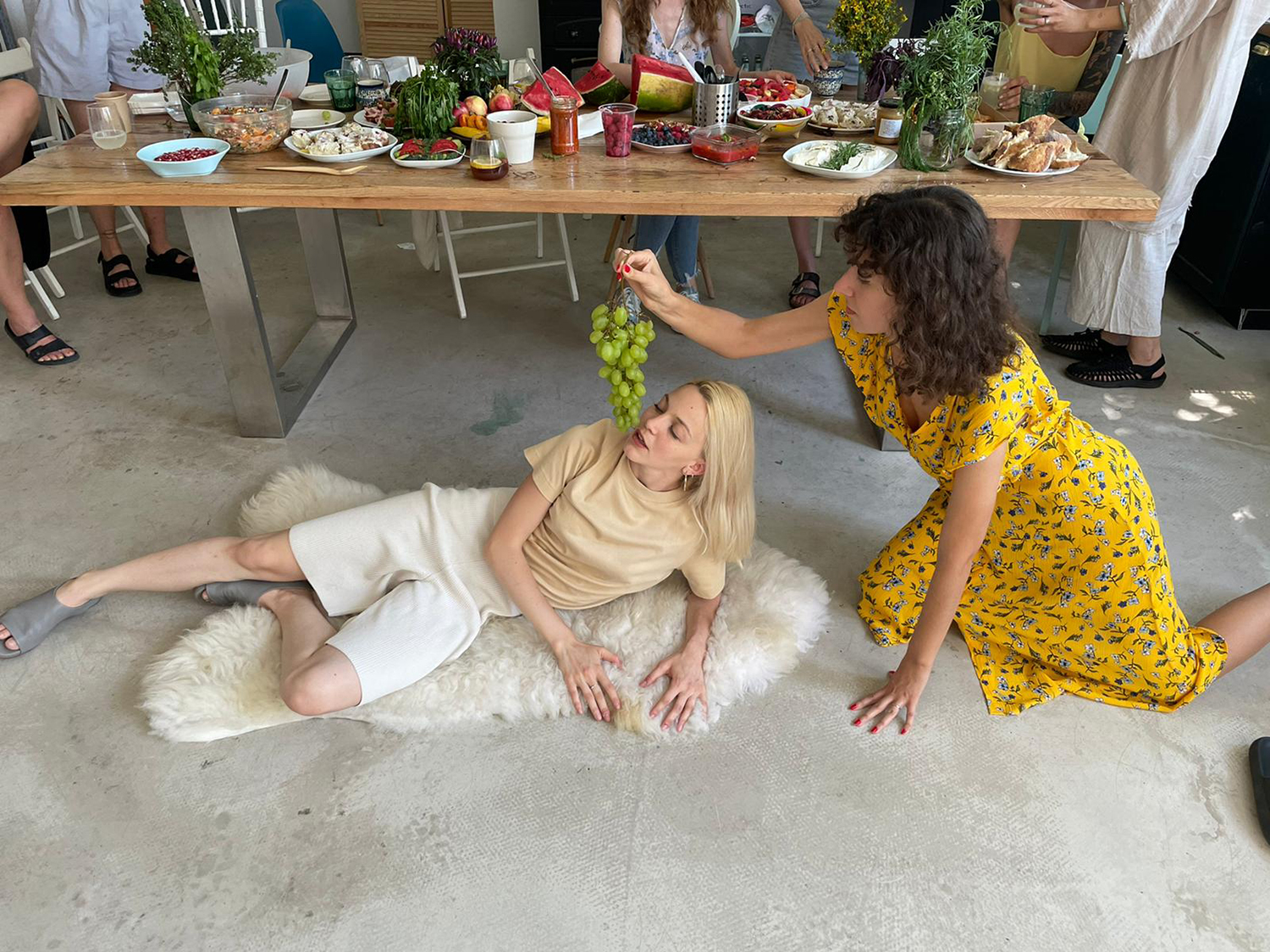 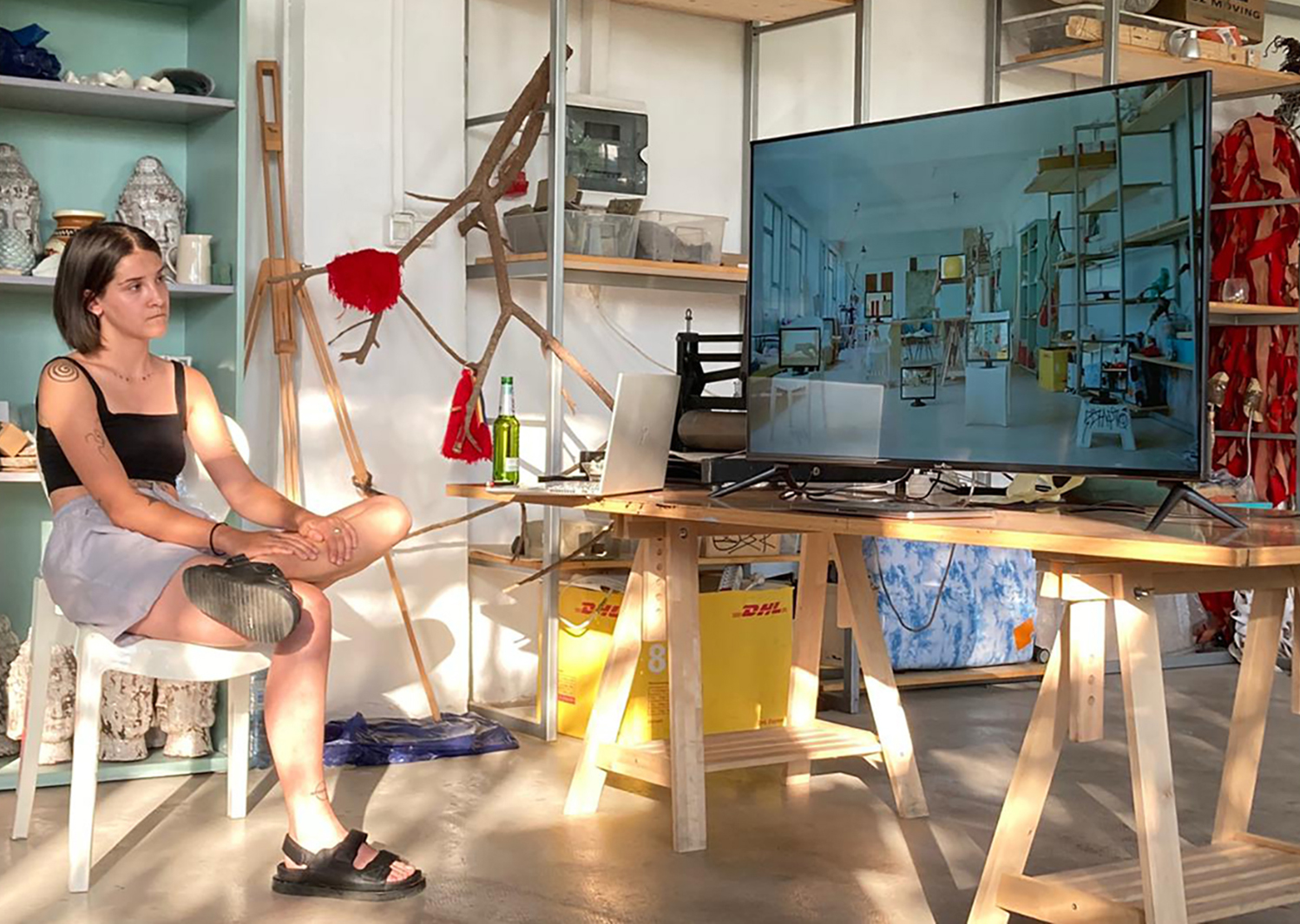 During the first two days of the symposium, we (Barbara Lüdde, Lera Kelemen, Catinca Malaimare, Yen Chun Lin, Isabella Fürnkäs, Beth Hughes, Lexia Hachtmann, Ioana Stanca, Ana Pascu and Ana-Maria Stefan) opened up our practices to each other and to the local art community housed within the Malmaison Ateliers. From drawing, image-making, painting, the laborious techniques of embroidery to the multitudes of using the self and the body in performance, surfaces and installations, sound art, each artist talked about the research themes that premeditated the work, their studios and the challenges of artistic labour in the current society. 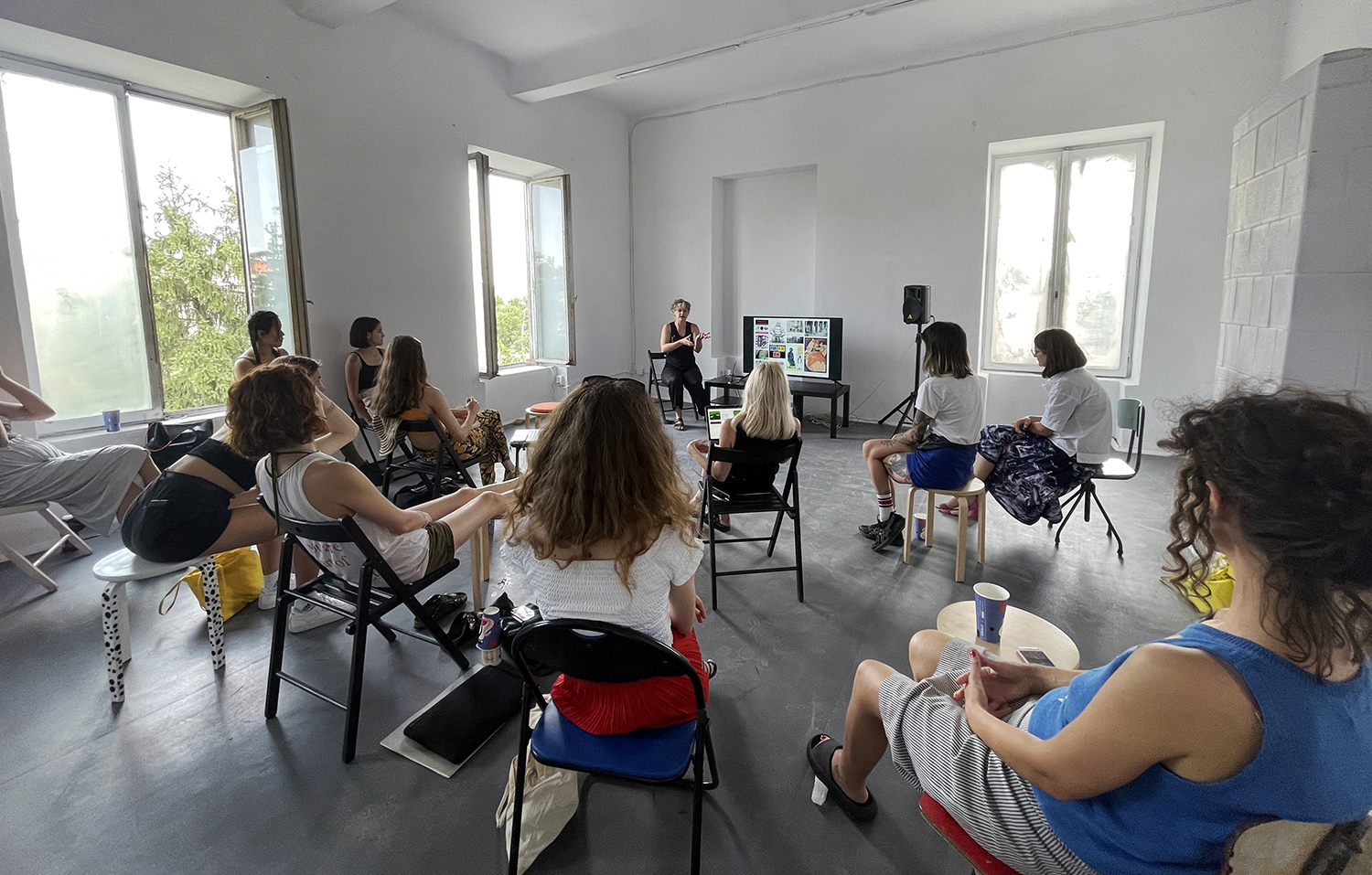 On July 18th, the historical farmers’ and artisans’ market, Piata Obor, was our meeting point to gather cooking ingredients and to focus on the effort towards locality and the choice of produce brought to the market over imported food. Our aim was to prepare a collective meal as we reflected on the roles – and the power- we assume when we come in contact with the relationship between food and its place within the domestic context, from the first served at the dinner table to the much larger themes of local produce and the diaspora, the healing remedies which feel like valued currencies or the shared experiences which construct our universal parallels. 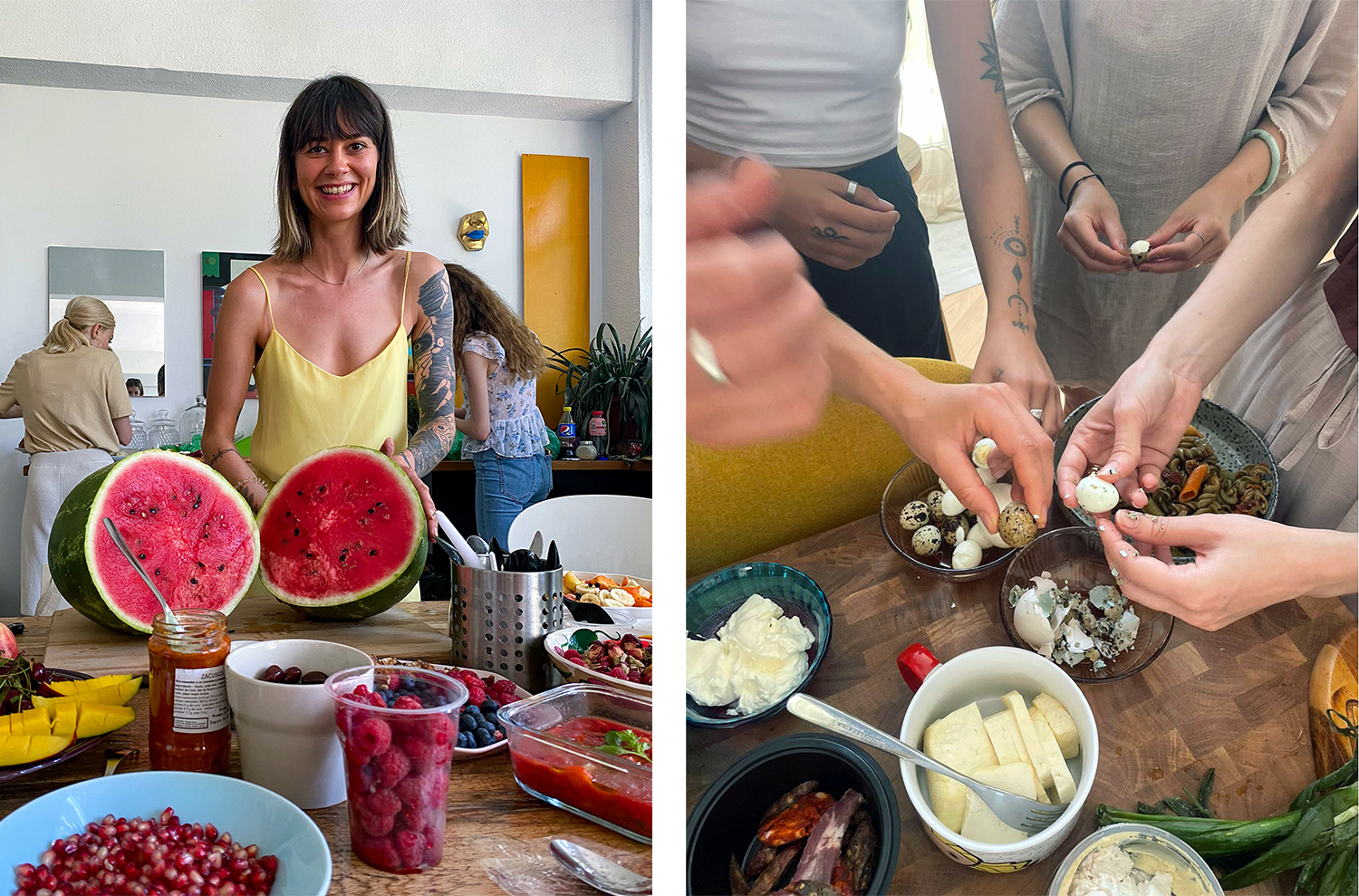 The process of preparing a collaborative lunch, exploring either Romanian gastronomy or traditional recipes from our own cultures, as well as the act of arranging and decorating a table, resulted in an universal experience had by women around the world everywhere. While it is difficult to put into words why this unity is so important, the feeling one gets when they become part of something truly universal is implicitly important to the movement of society forward.

Symptomatic to the changes brought about by the Covid-19 pandemic, we were experiencing similar situations around the world, regardless of creed, financial status or political context. There is a knowledge we can sense that this shared experience has moved us closer towards unity and that it will help move us into a different way of collaborative living. We are already feeling the first strokes of this change with the commitment of 140 countries to an international corporate tax and to the rise of Green parties focused on ecology across many nations. 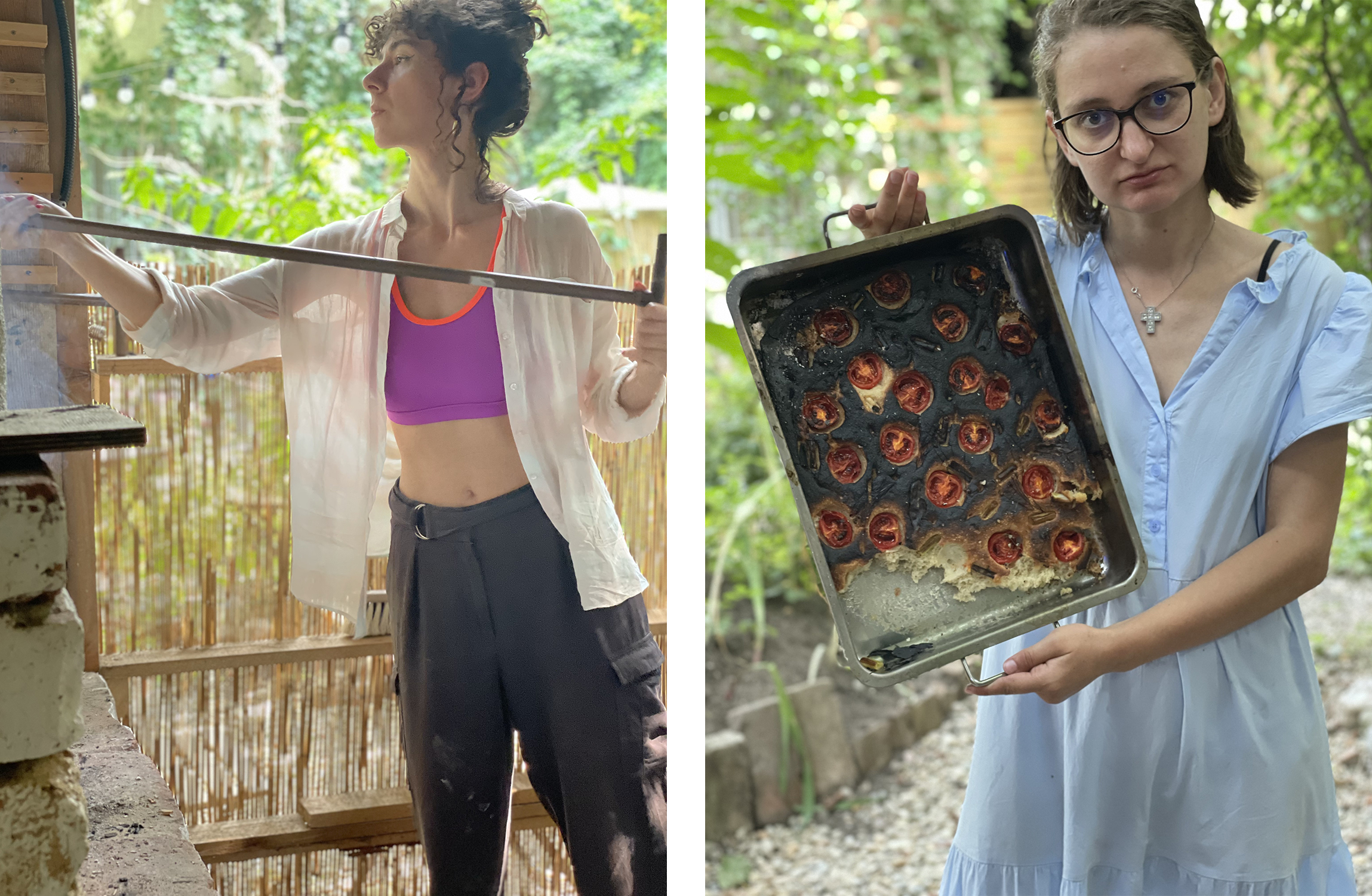 A BUN IN THE OVEN

Led by Ioana Stanca, we dedicated an afternoon to the femininity of breadmaking, elevating further the communal aspects of dining together imbued now with a slow temporality to allow for the dough to rise, an appropriate metaphor for the awareness of the self within a larger social and artistic environment prompted by the temporal shifts we all suffered in the past 18 months. A continuation of Ioana Stanca’s association to the personal, the sexual and the feminine largely through her embroideries, breadmaking is another manifestation of the artist’s autodidactic exploration through the tactile senses. Here, kneading is performed with the same hand that embroiders. 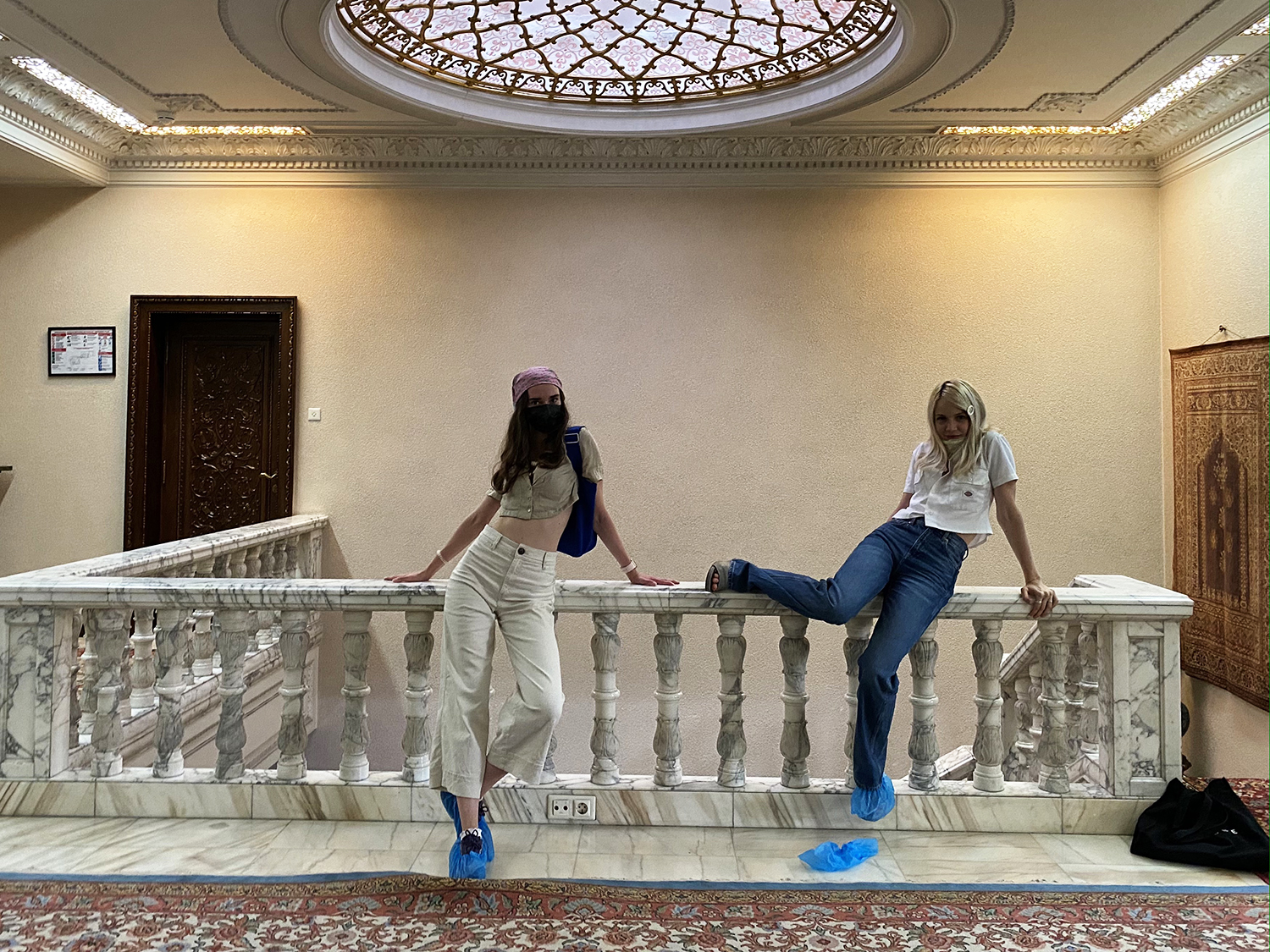 In order to reach back into Romania’s recent past, we visited Casa Ceauşescu, the private residence of the former leader of Communist Romanian between 1965 and 1989 and his family. The striking, luxurious, gaudy interior offered a striking juxtaposition to the brutalist communist architecture found all around Bucharest. A museological site of the former presidential residence that stirred up class distinctions that have never been managed from an objective perspective, exposing the instruments that oversaw a large part of Bucharest’s reality in the city’s recent history. 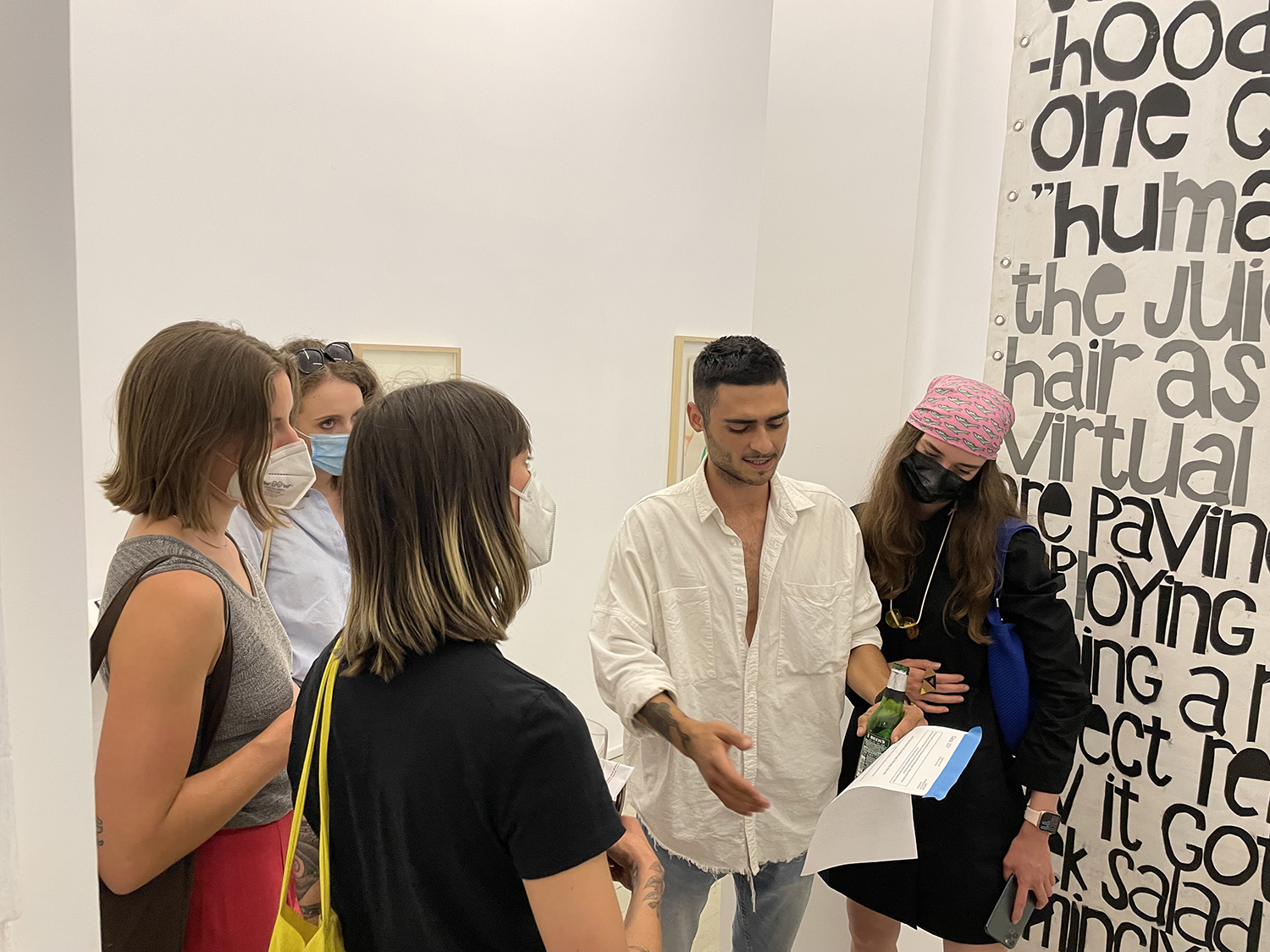 Gallerist Robert Bajenaru leading the group on a tour of Cazul 101, at Malmaison.

The 7-day symposium allowed for a rich overview of the plurality of contemporary art spaces in Bucharest. In addition to spending time at Catinca Tabacaru Gallery, Sandwich and Malmaison Ateliers, the group visited Ivan Gallery, the scene’s most senior space; Atelier 35, a unique architecture and a curator-run space initiated in the early 1970s; the NFT focused Leilei gallery and IOMO, some of the city’s newest galleries; the young and rising Cazul 101 space, run by the keen eye of Robert Bajenaru; as well as the more established Mobius, Sector 1, and Nicodim galleries.

Attending each one of these exhibition openings, we were able to get a real sense of the growing art community and the public ethos of each one of these spaces while introducing the Berlin-based artists to the local art scene. One of the arching narratives of the project is to build networks across national borders, cultivating lasting artist-to-community relationships that will support the long term personal and career development of the participating artists. 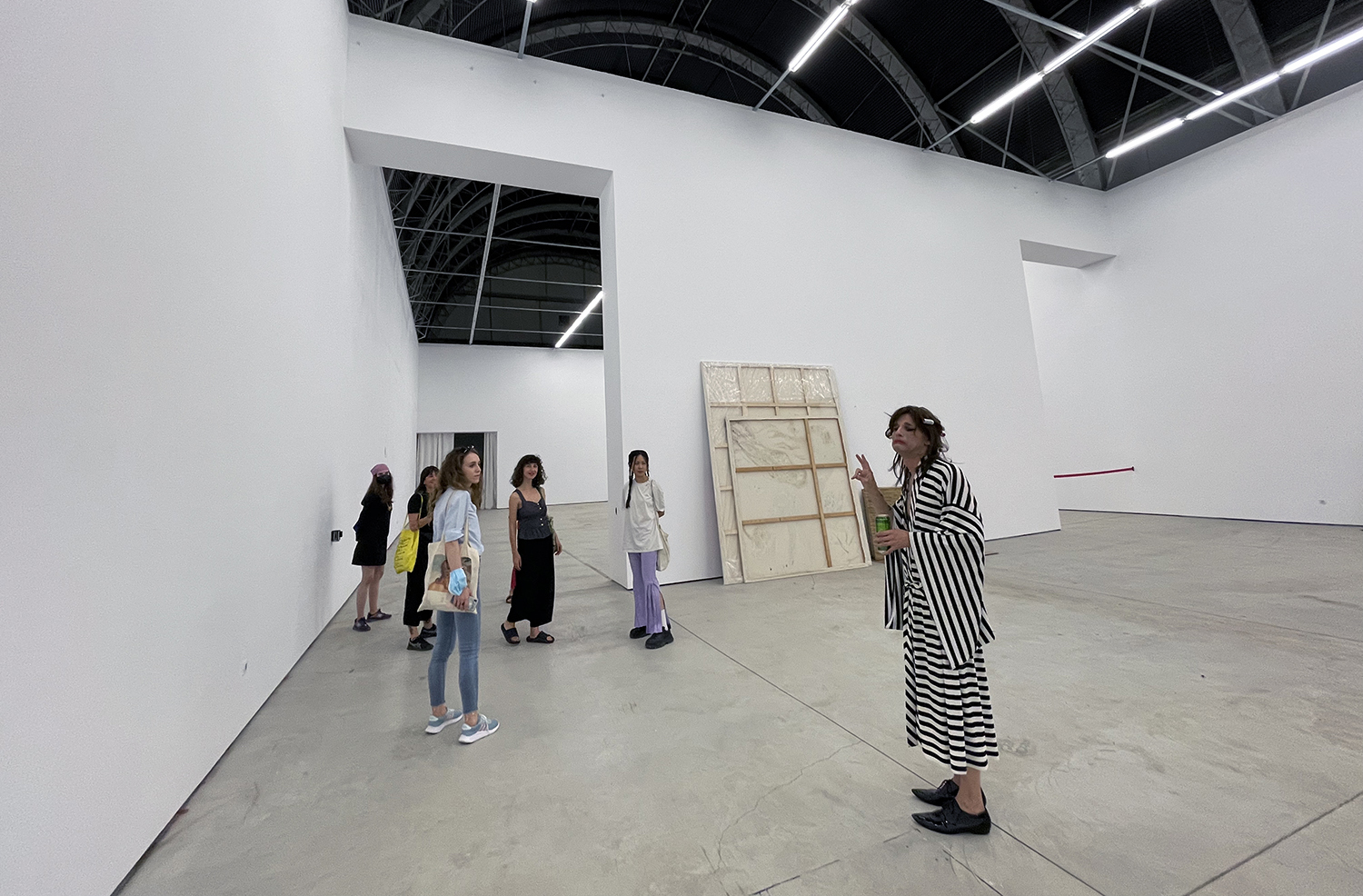 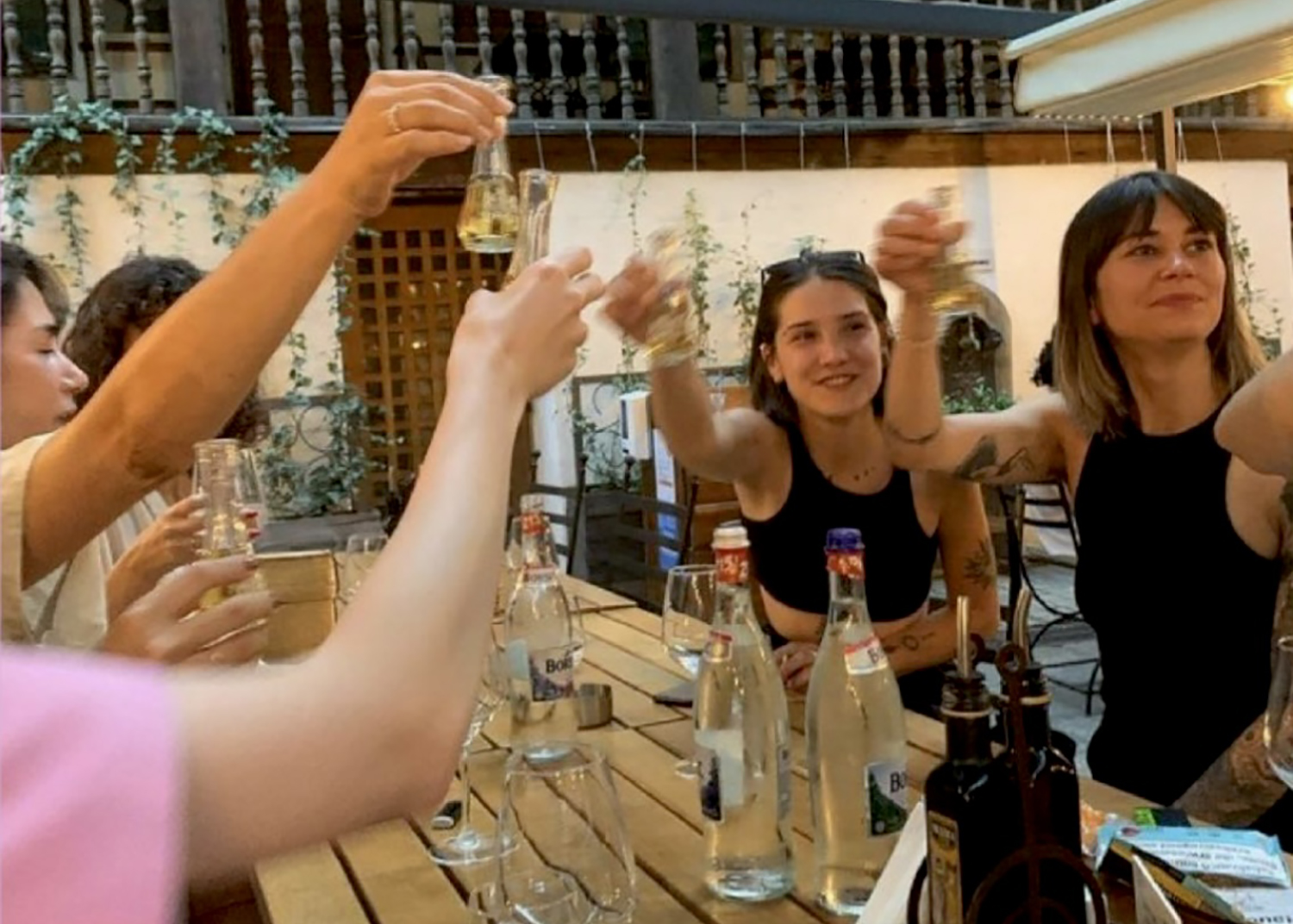 Our first shared meal brought the participants in the residency programme together, with each other and within the local gastronomic and historical context. Over this convivial gathering we shared delicious Romanian foods and home-brewed alcohol (i.e. Tuica, Palinca) specific to a Romanian household. This was an intimate moment to connect and discuss what brought us together, share each other’s histories and find common ground.
Our first host was the historically significant Hanu’ Lui Manuc (Manuc’s Inn), the oldest Inn in Europe, serving us manorial dishes with a Romanian taste, beaten beans, homemade bread, grilled minced meat rolls, mutton pastrami, pork neck.

At the end of the symposium, we gathered together in a similar way, to celebrate the global connections that tie us to each other. In Romania, a departure is commonly celebrated in big family gatherings and our last meal together was an extended family dinner, over a 9ft-long table. 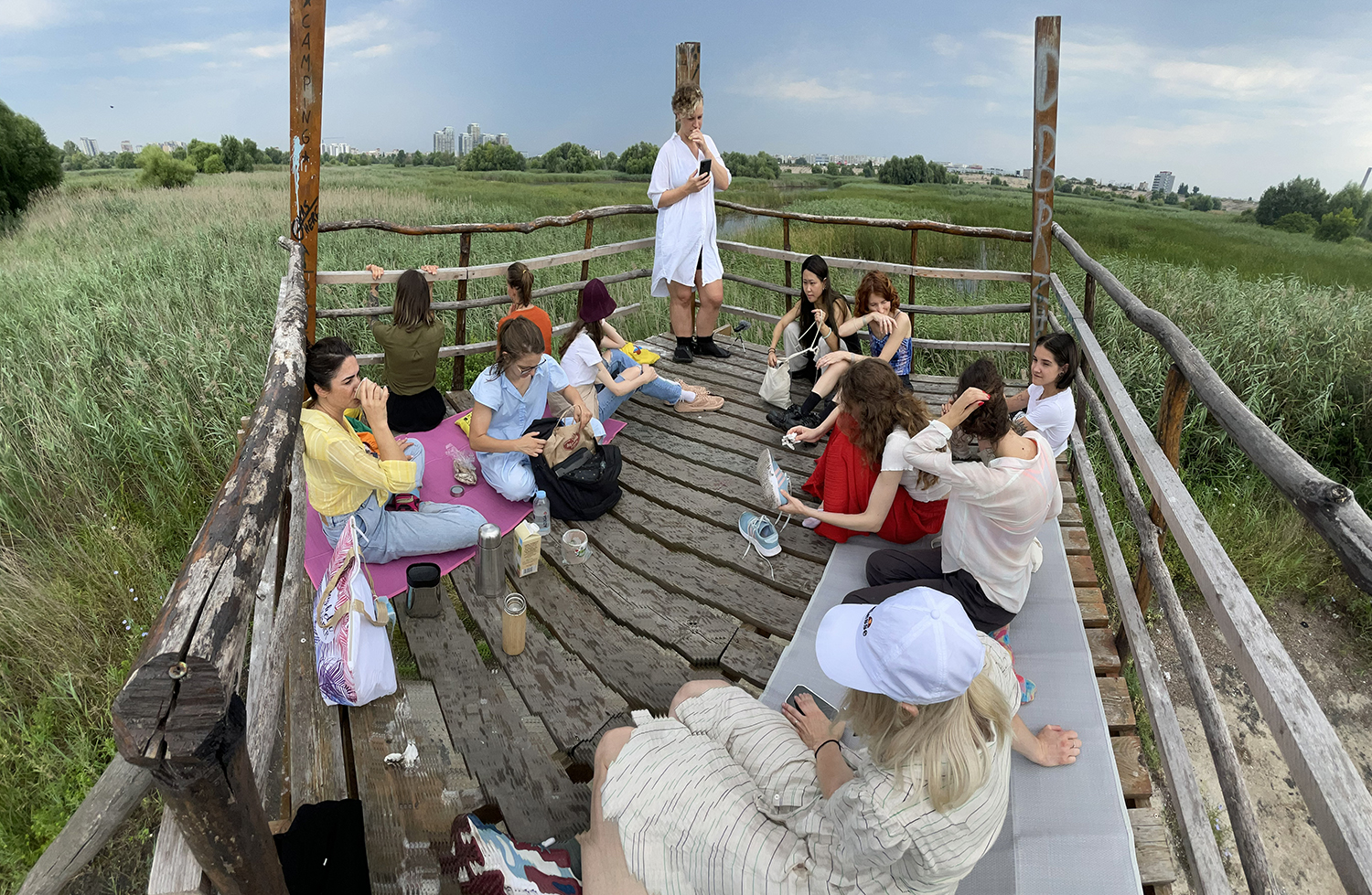 The pace proposed by Bethan Hughes was a prolonged and slow one, calling for a global ecological care that brought the group to the Vacaresti National Park, a nature reserve and a wetland where we could feel the soil beneath our feet. The economic, the contemporary history of the failed Communist water project and the social implications are all entangled and at the center of environmental theory, as Bethan’s approach to recording the environment was premeditated each time by the artist’s reading of The Third Landscape from Planetary Garden by Gilles Clement, to the listening group. The workshop seeked to capture the Delta beyond a matter of appearance, towards a sonic experience of an ecosystem. 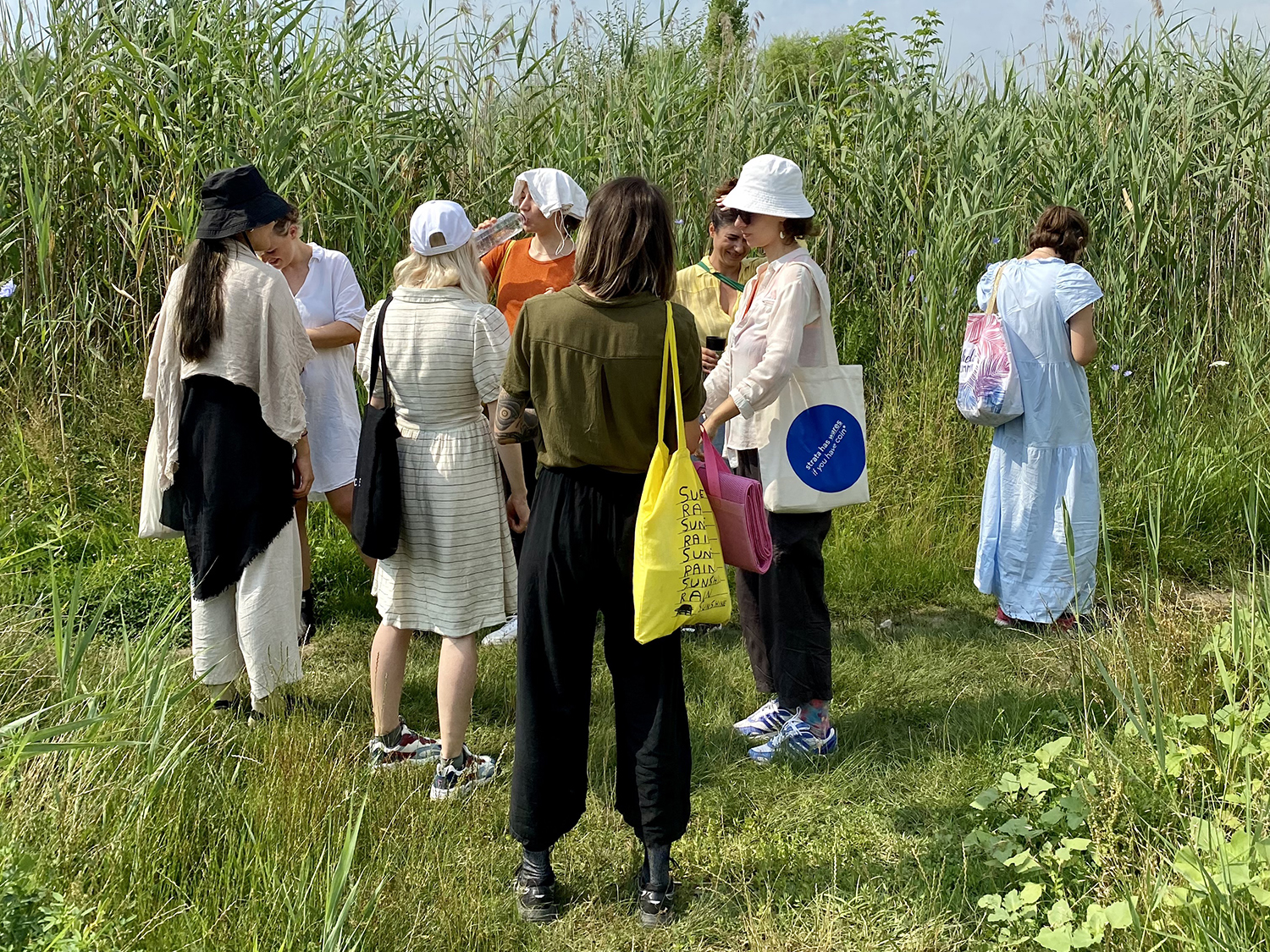 Bethan Hughes leading the group around the Vacaresti Natural Park 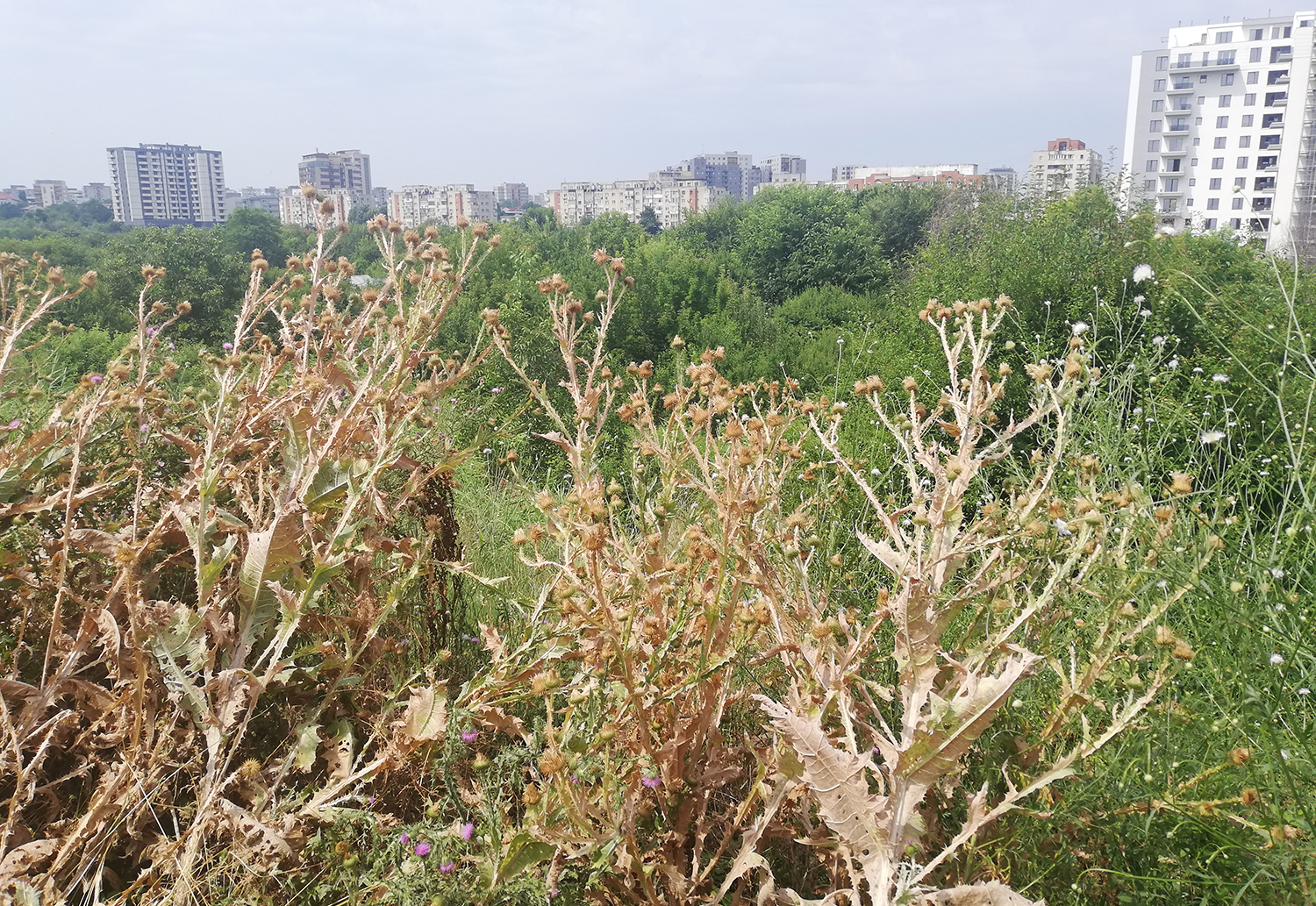 Views from the Vacaresti Delta

Staged during the time we allowed our bread to rest and rise, artist Yen Chun Lin grounded us with a napping activity, a moment of collective dreaming that helped us slowly fall in and out of our consciousness, to the artist’s sound work. Collective dreaming was a proposition to share an activity that seems to either belong to our past, to the collective, albeit forced, naps we took during after-school hours, or to the substantially more intimate notion of falling asleep in the vicinity of other bodies that’s more favoured by our adult consciousness. 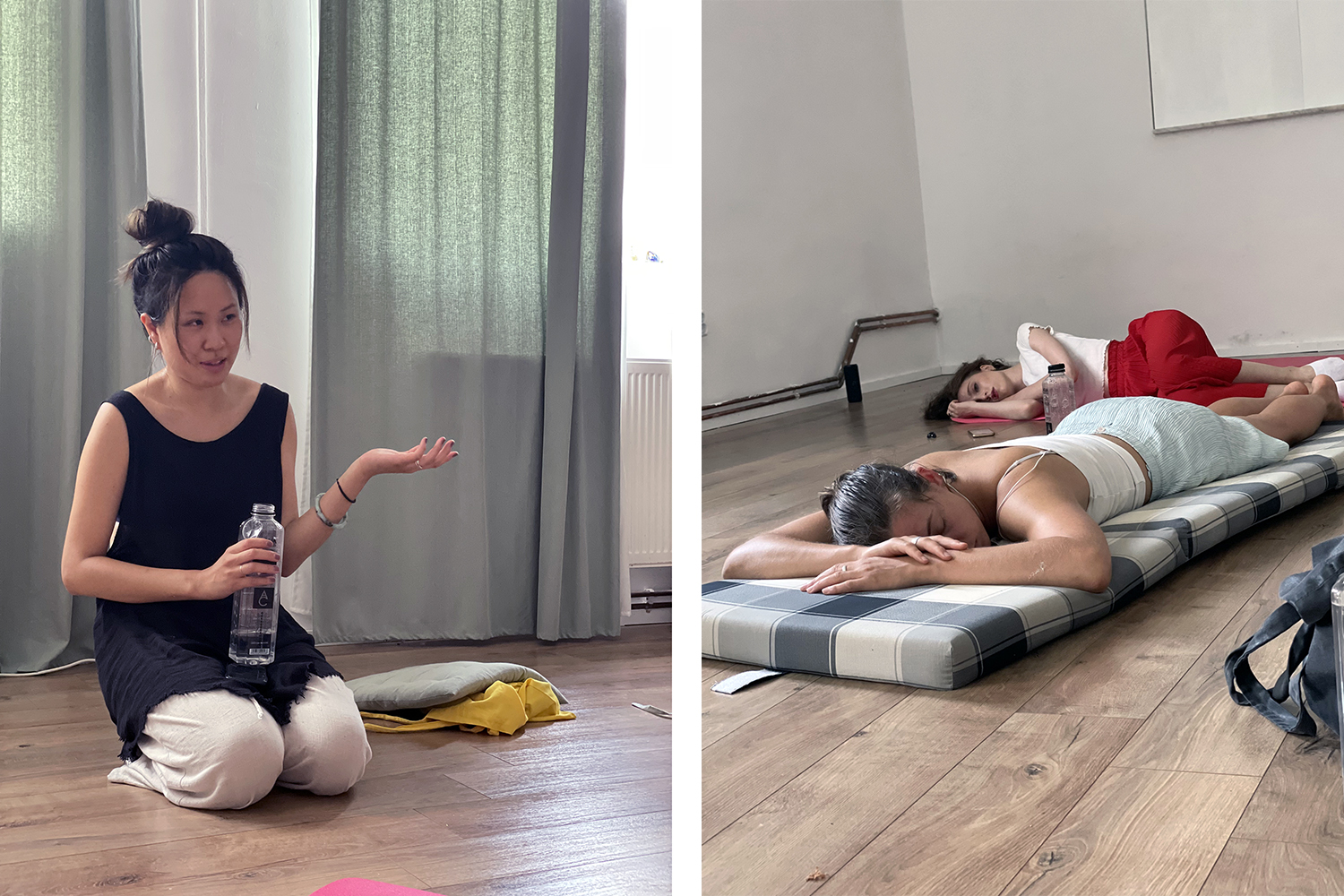 Continuing in the same discursive tone of the entire symposium, we awoke to a conversation around the material and ambiental imprint of sound, expanding the sensory perception and the immersive soundscapes that connect us to our surrounding environment. 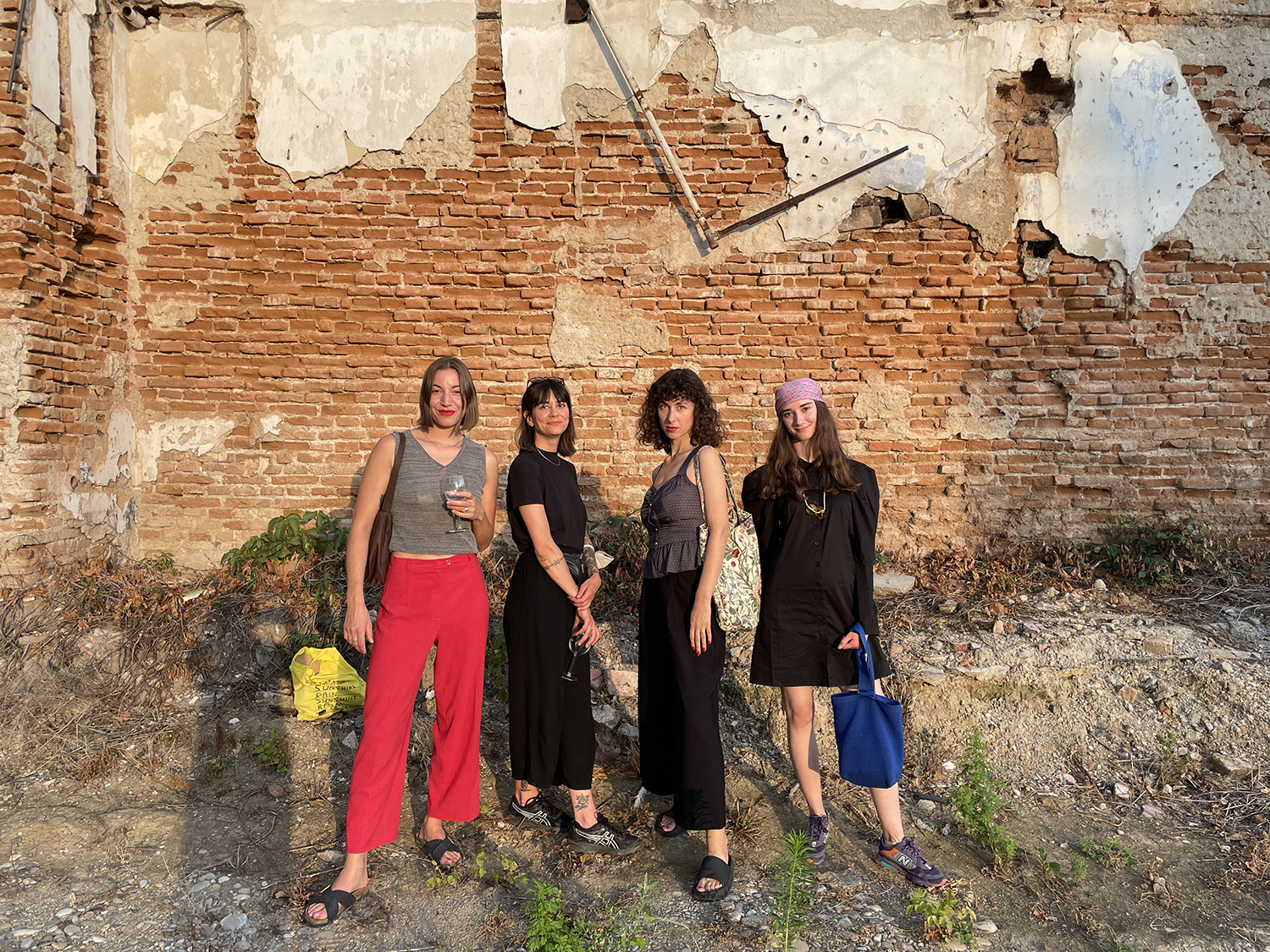 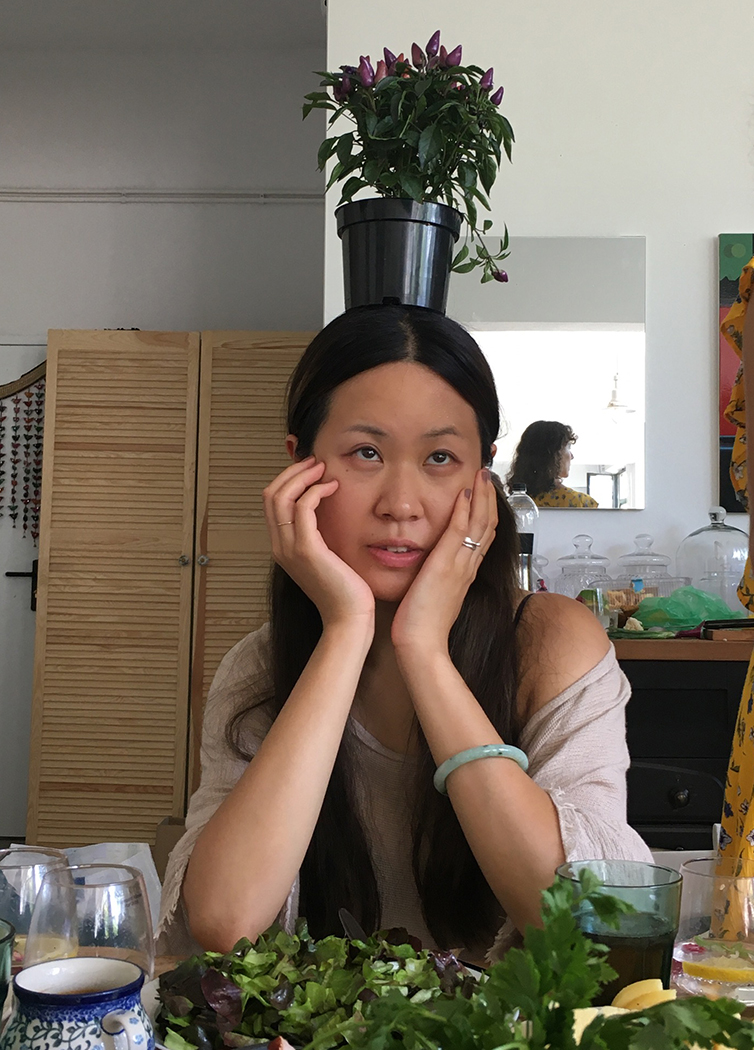 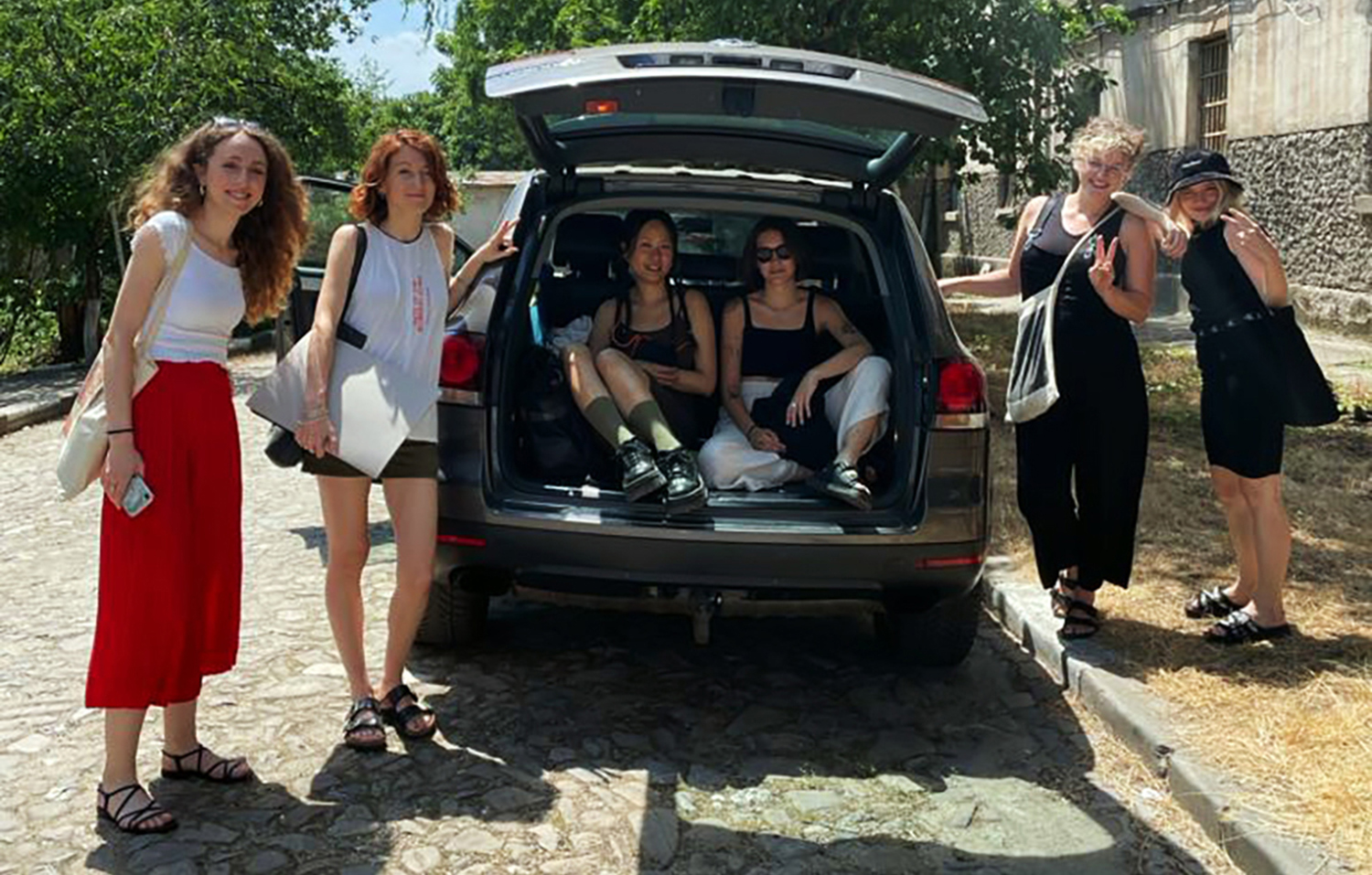 HUGE THANKS TO OUR ORGANIZERS, SUPPORTERS, AND HOSTS

STAYCATION is a collaborative project by the CTG Collective and Sandwich Association. Its first iteration constituted of a 7-day Symposium in Bucharest, July 16-23. It continues with the mounting of an exhibition across two contemporary art galleries in Bucharest – Galeria Catinca Tabacaru and Sandwich Offspace at Malmaison Ateliers – to take place between December 14, 2021 and January 29, 2022.

It is part of the Program Sandwich Club 20-21, a cultural program co-funded by the Administration of the National Cultural Fund (AFCN). The program does not necessarily represent the position of the AFCN. The AFCN is not responsible for the content of the program or the manner in which the results of the program may be used. These are entirely the responsibility of the funding recipient.

Many thanks to The Legacy, Bucharest, for putting their space, garden and oven at our disposal and to all the galleries that warmly welcomed us. 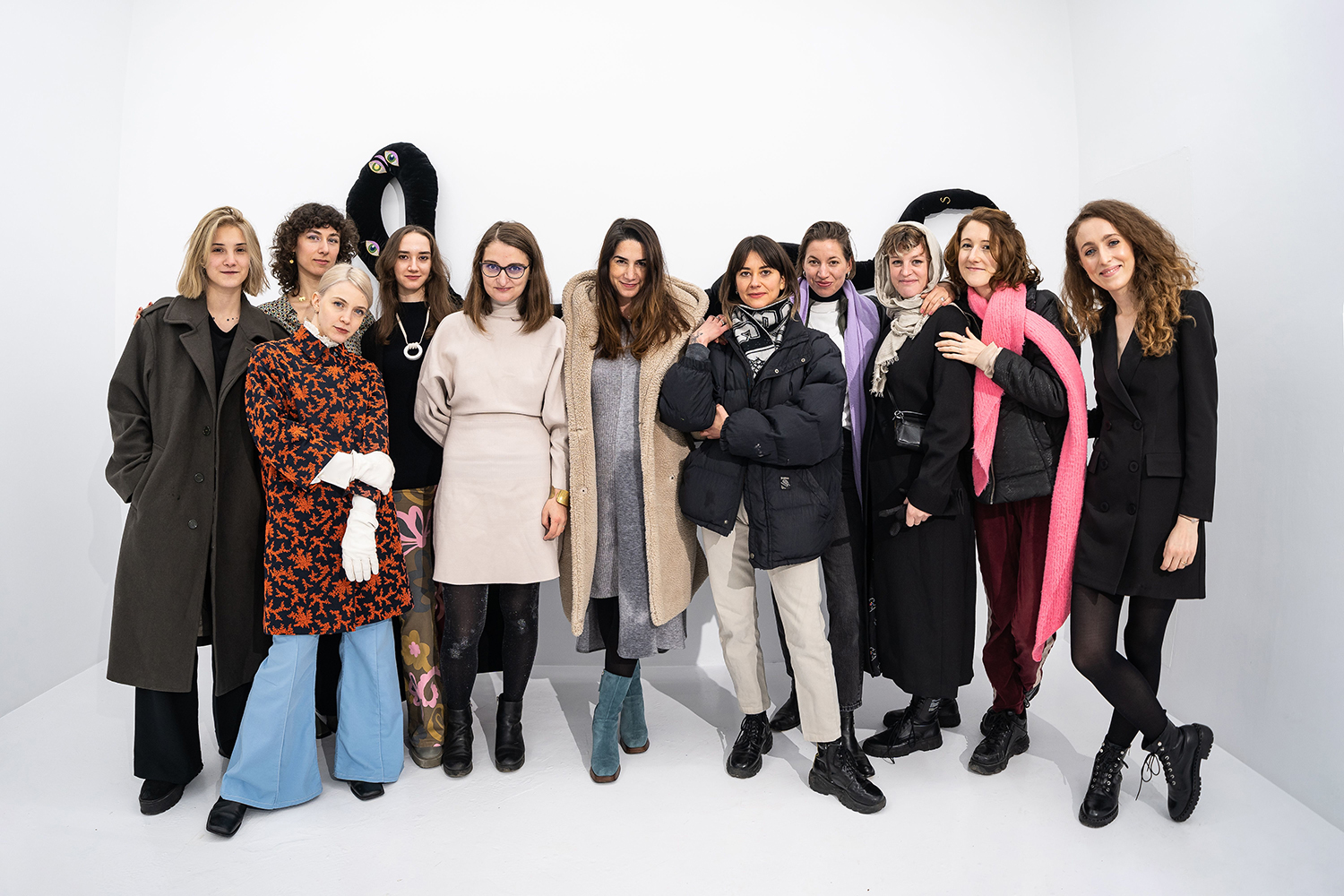 As the residency slowly reached meaningful conclusions, the objective quickly turned to the continuation of Staycation and its return to Bucharest in December 2021 as an exhibition planned to open across two contemporary art spaces – both of them having played host to us during the first part of the project- showcasing the works of the ten female artists at the core of the project.

This joint exhibition hosted by Catinca Tabacaru Gallery and Sandwich Offspace, at Malmaison, will contribute and create a lasting exchange between artists in a city where the contemporary art scene is growing.

What will this collective dialogue render as results other than the cultivation of transnational relationships? What will we find out about our desires for the Earth; for our children’s future? What will we learn about democracy, freedom, and equal distribution of resources? This, no one can predict, but we are determined to build in order to discover. Simultaneously, the exhibition will create an environment and an opportunity to engage in discourse that will ask its own questions about our ecological and social futures.