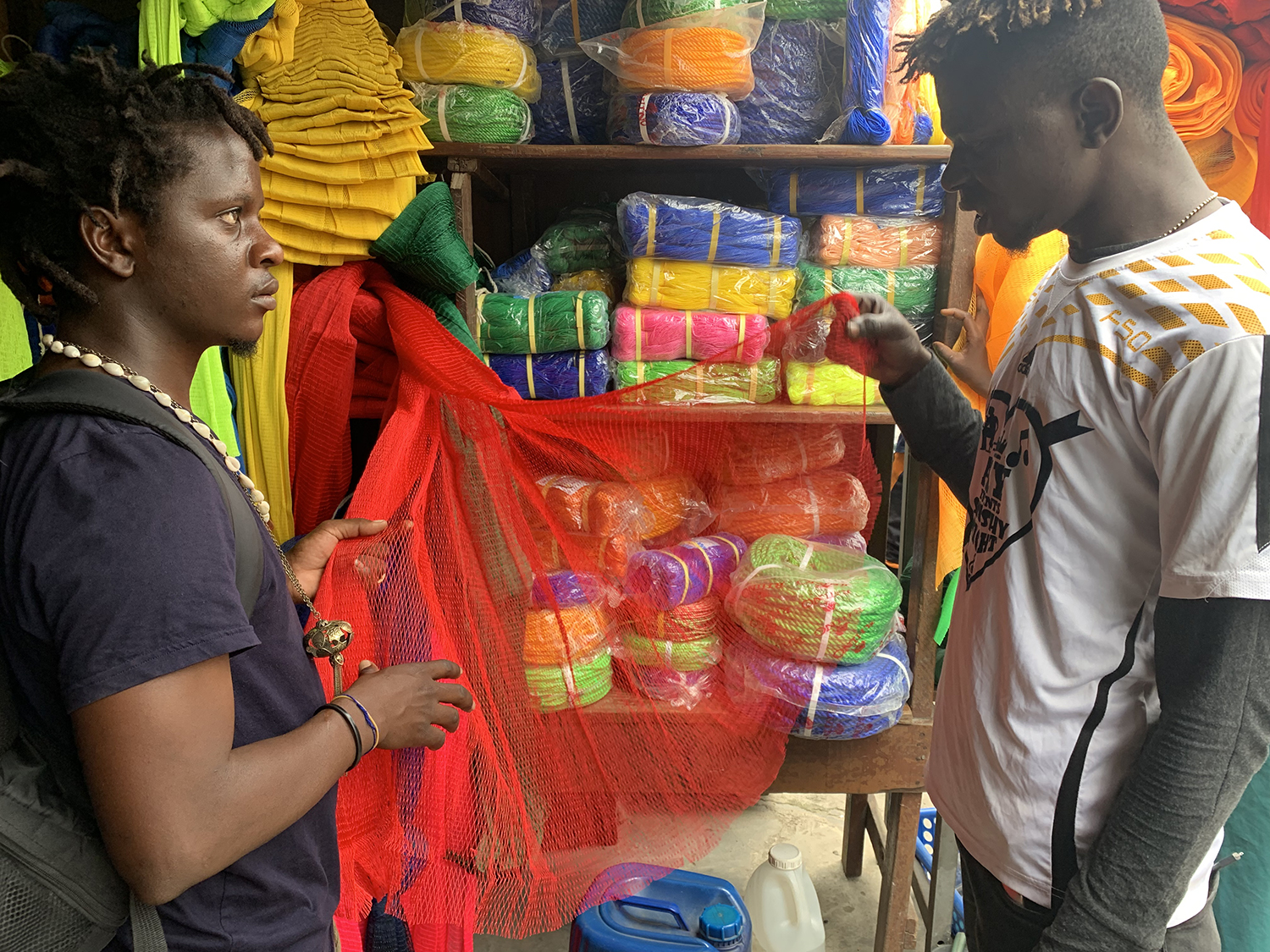 In their first two weeks there, Terrence and Raphael were able to navigate the densely populated streets of Lagos Island with the help of local musician Tshine and friends at hFactor. They gathered materials and met with different community members to discuss and understand bit by bit the inner workings of their world.

While Lagos Island is but a small section of an ever-growing city with a population of over 21 million people, it certainly feels like it embodies all the complexities of city life. This is Yoruba land and Tshine is a true local and thus the perfect guide. With his expertise, Terrence and Raphael moved through the island’s tightly packed markets, negotiating the price of multicolored fishing nets, hopping on yet another Keke (more commonly know as rickshaws), and zipping easily between the intense traffic toward the scap yards and junked cars which sit underneath a raised highway that snakes through the island. 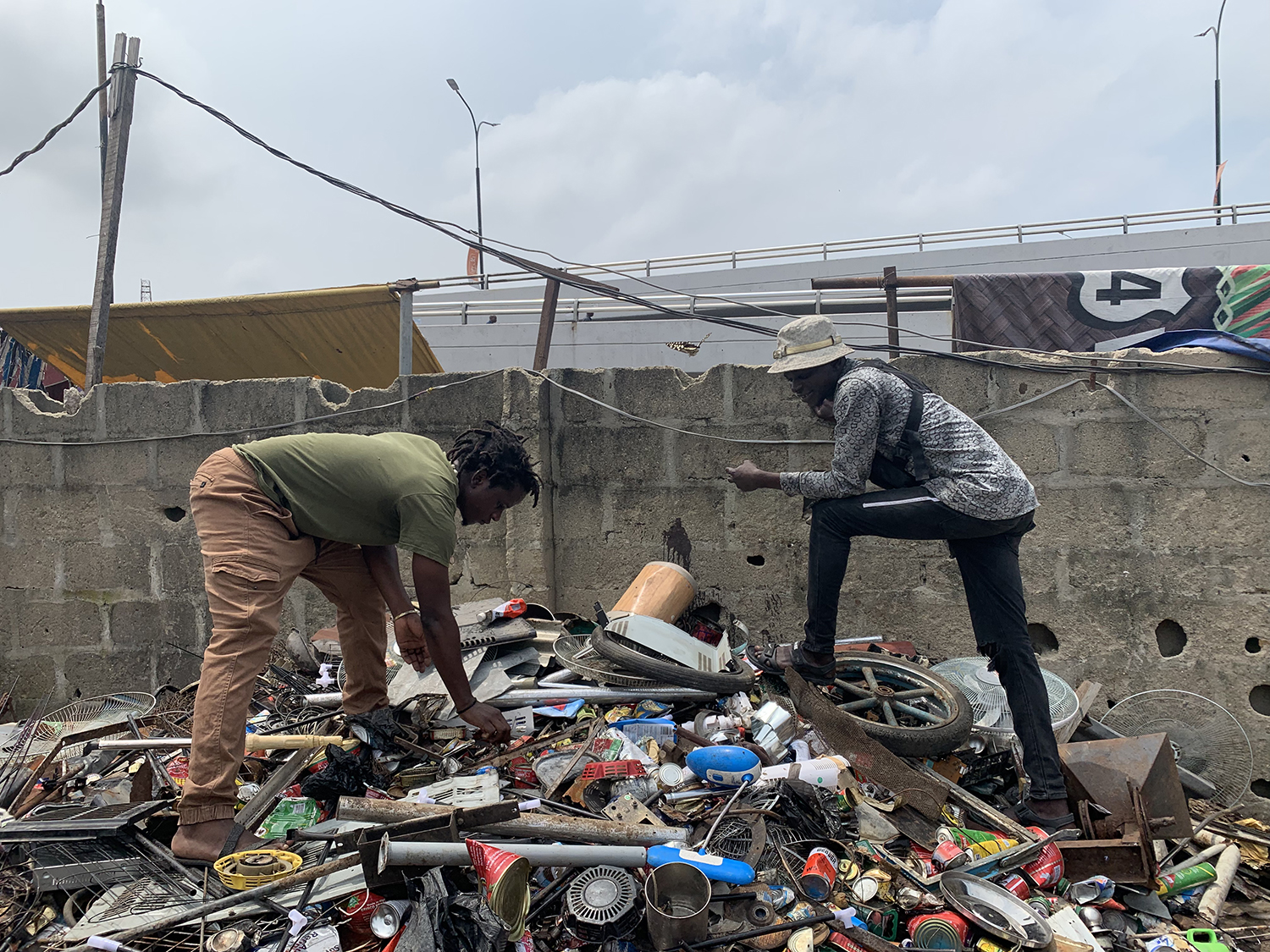 Musekiwa and T-Shine sorting through materials under Ring Road, Lagos 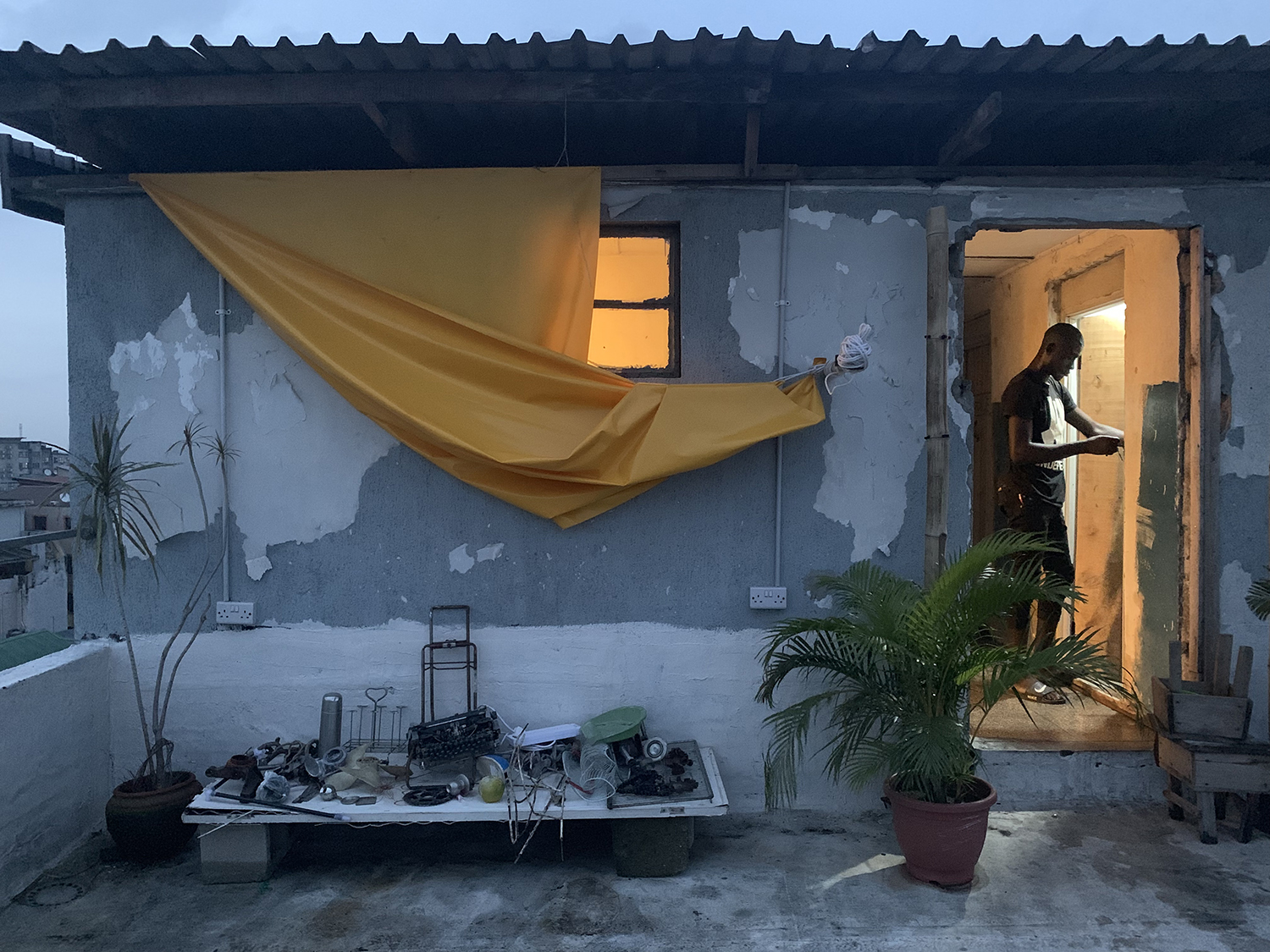 Terrence’s studio sat atop the roof of hFACTOR, overlooking a variety of environments, from the boisterous streets, to concrete skeletons of unfinished buildings, to the juxtaposition of large flashing LED advertisements set on weathered colonial architecture; remnants of the British Empire. This vibrant backdrop was nothing less than a creative feeder seeping into Terrence’s new works. 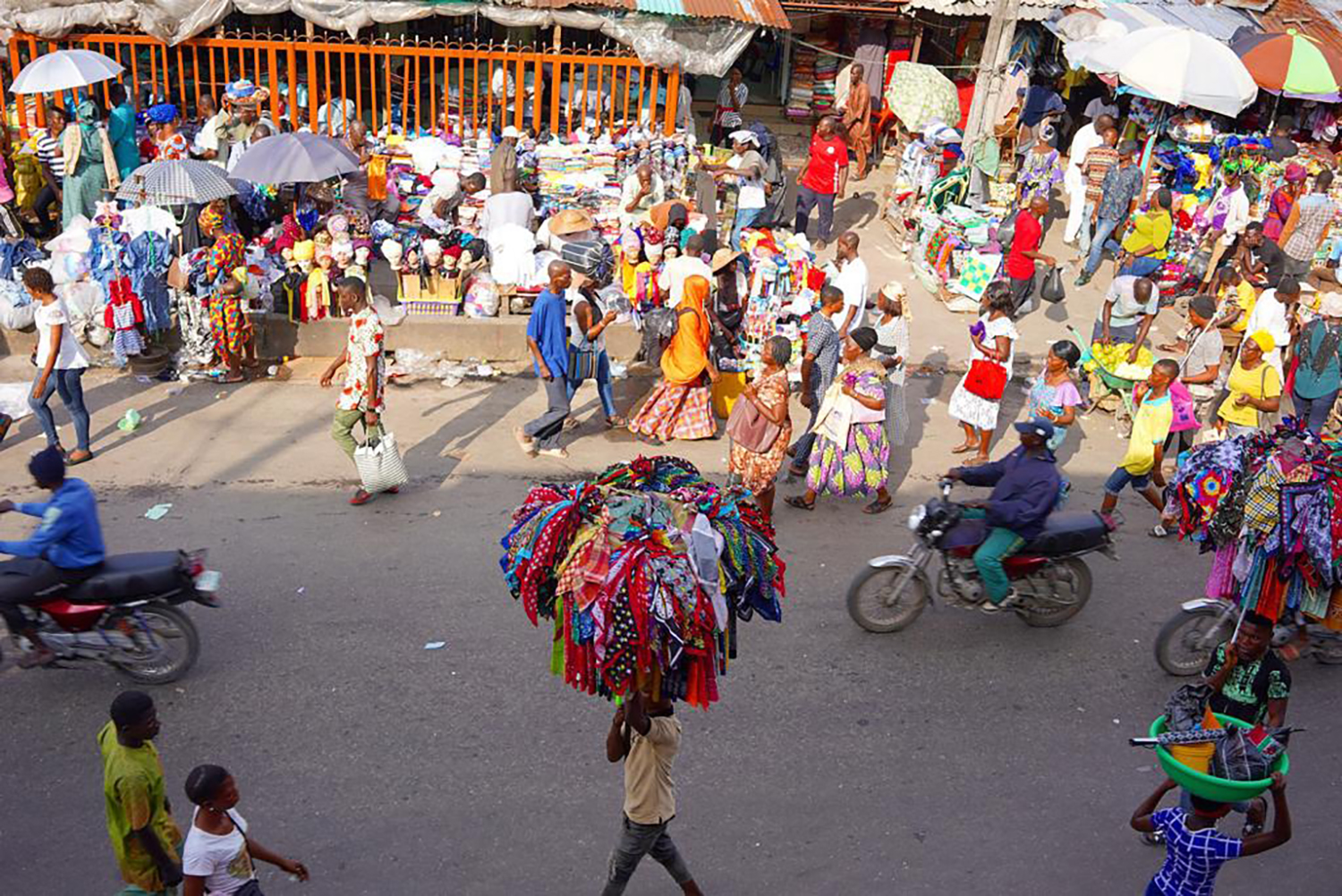 CTG Collective and hFACTOR opened their first collaborative exhibition in the 16/16 Residency space, a solo presentation of the stone and found material works made by Terrence over his fist weeks in Nigeria. The evening introduced Terrence’s practice to the Lagos art scene and was filled with lengthy discussions around his stone carving process and how he sources and chooses his found materials. 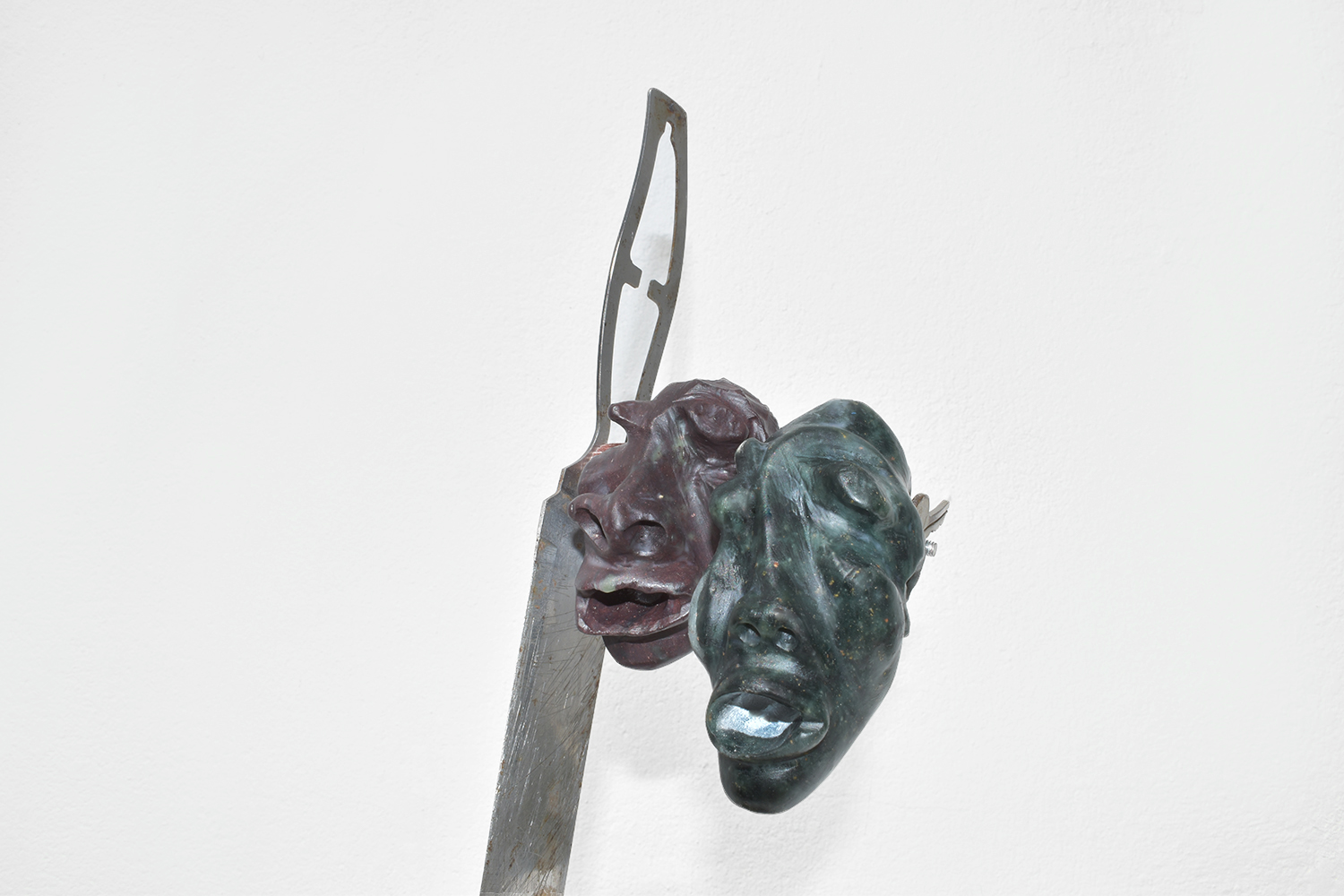 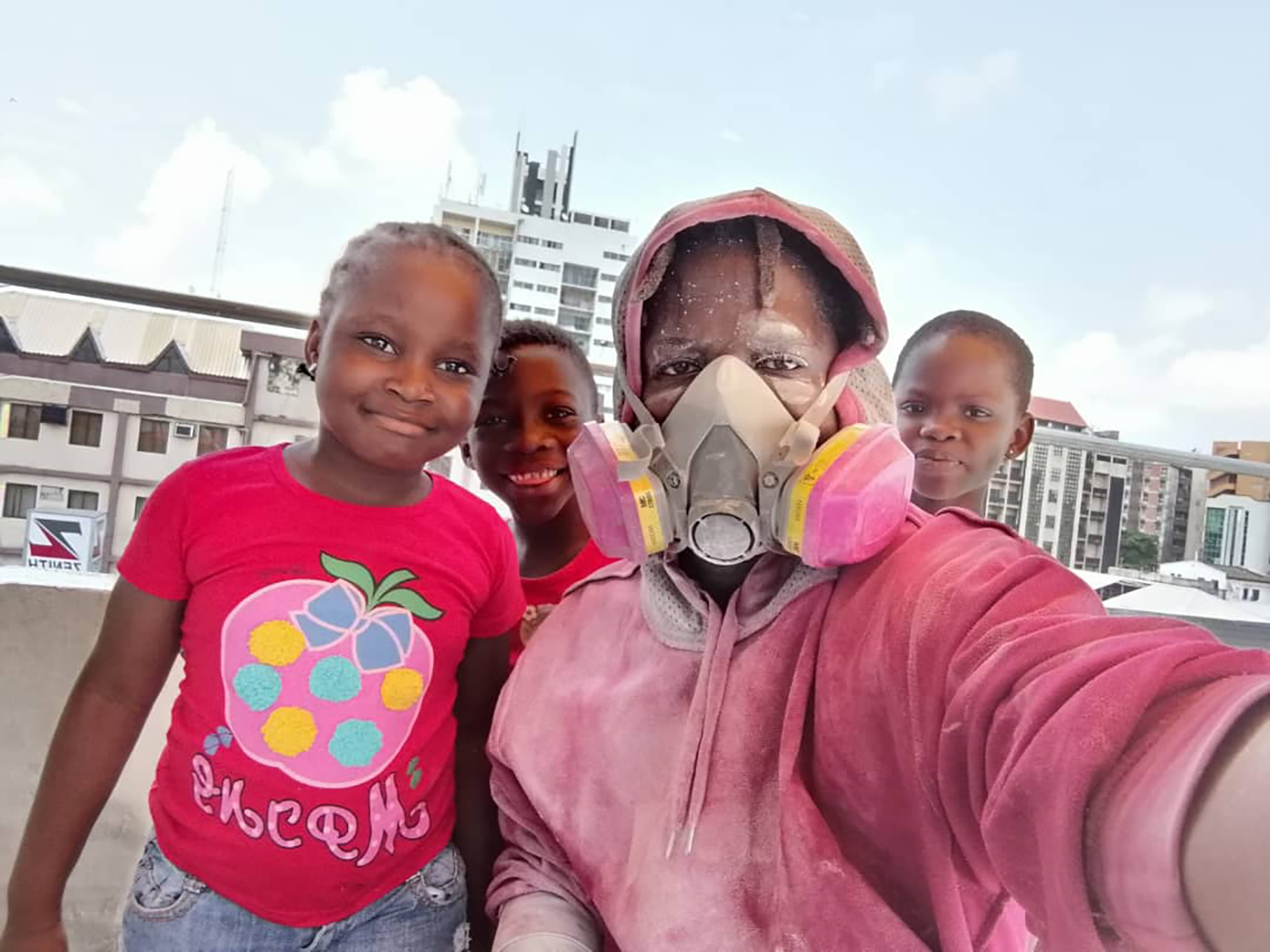 The first workshop focused on the use of recycled materials as an artistic medium and its historical roots in African art. Working with local youths from Lagos Island, they spent an afternoon turning ceiling panels into canvases to paint upon. With guidence and support from Raphael and Terrence these enthusiastic creators made over 20 works which were then exhibited during hFACTOR’s up-cycle event. 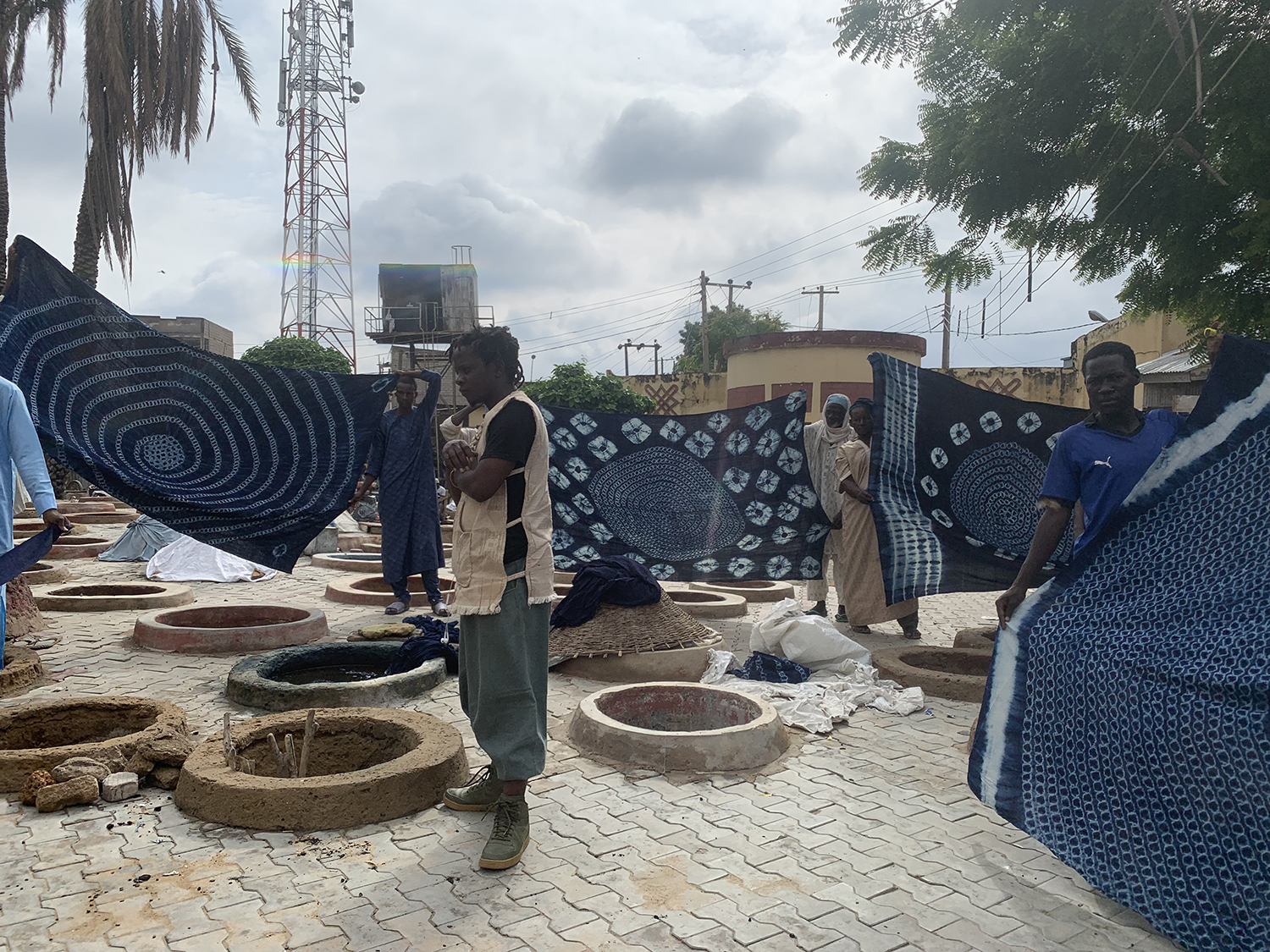 Week 3 of CTG: Nigeria, hFACTOR and CTG Collective head up to Kano state in northern Nigeria to visit the indigo dyers – Kano being one of only two places in the world that still grow, and dye with, indigo.

The first stop was the Kofar Mata dye pits in the center of Kano City. These pits have been operational since 1498 and are run by Haruna Baffa, whose family has been practicing this method of dying for several centuries. Haruna is known globally for his dyes and indigo patterns and has an exhibition at the Davis Museum in Boston Fall 2019. 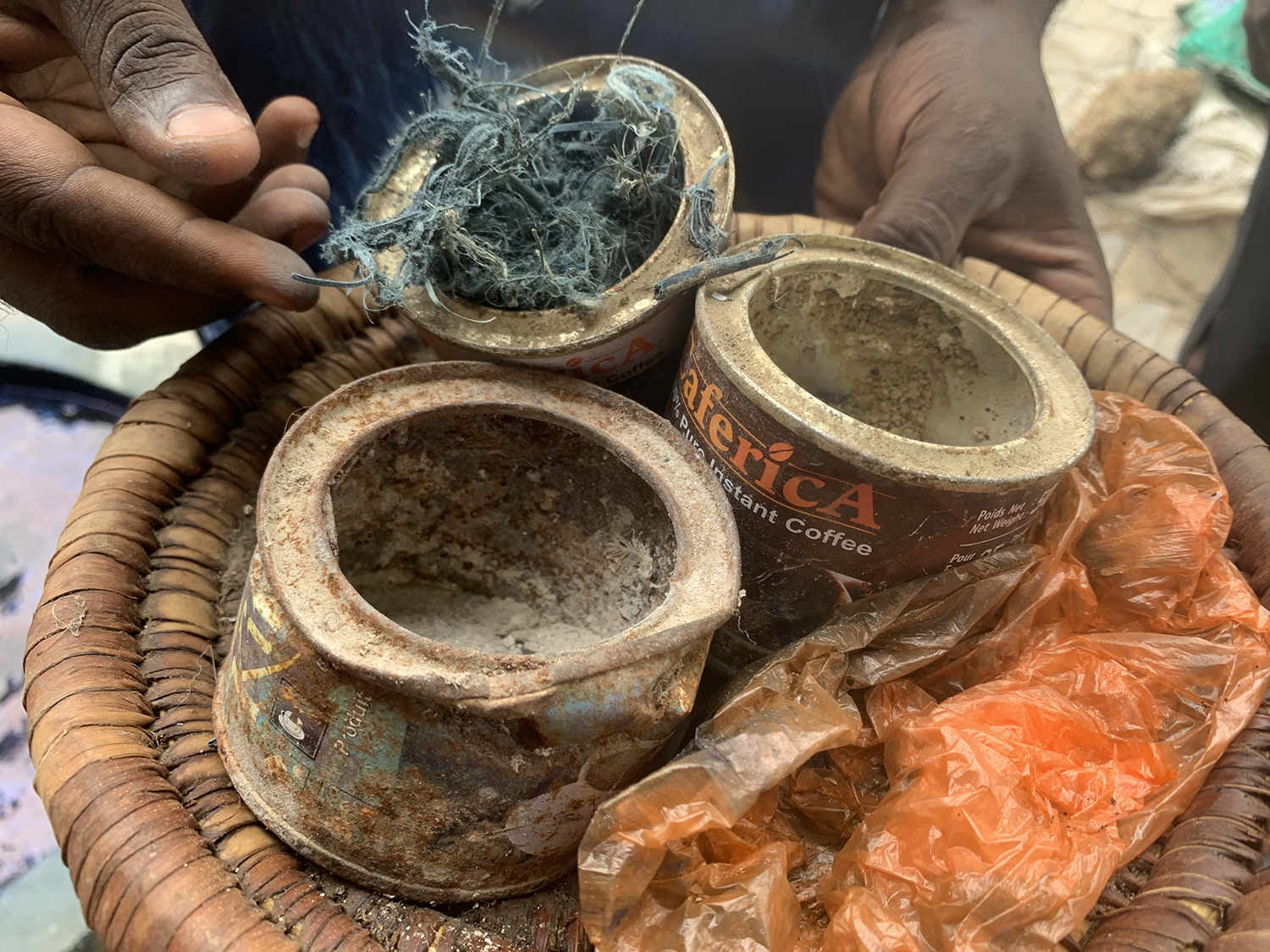 The ingredients for the indigo dyes; ash, potassium and dried indigo.

The dying process has not changed in centuries: water and ash, to give the dye a glaze, is mixed with potassium, to fix the color. Finally, dried indigo twigs are added, and the whole mixture is fermented in a six-meter deep pit for four weeks. This pit will dye multiple fabrics daily for a full year before the mix is finished and the remaining turned into traditional medicine which is believed to cure a multitude of illnesses. 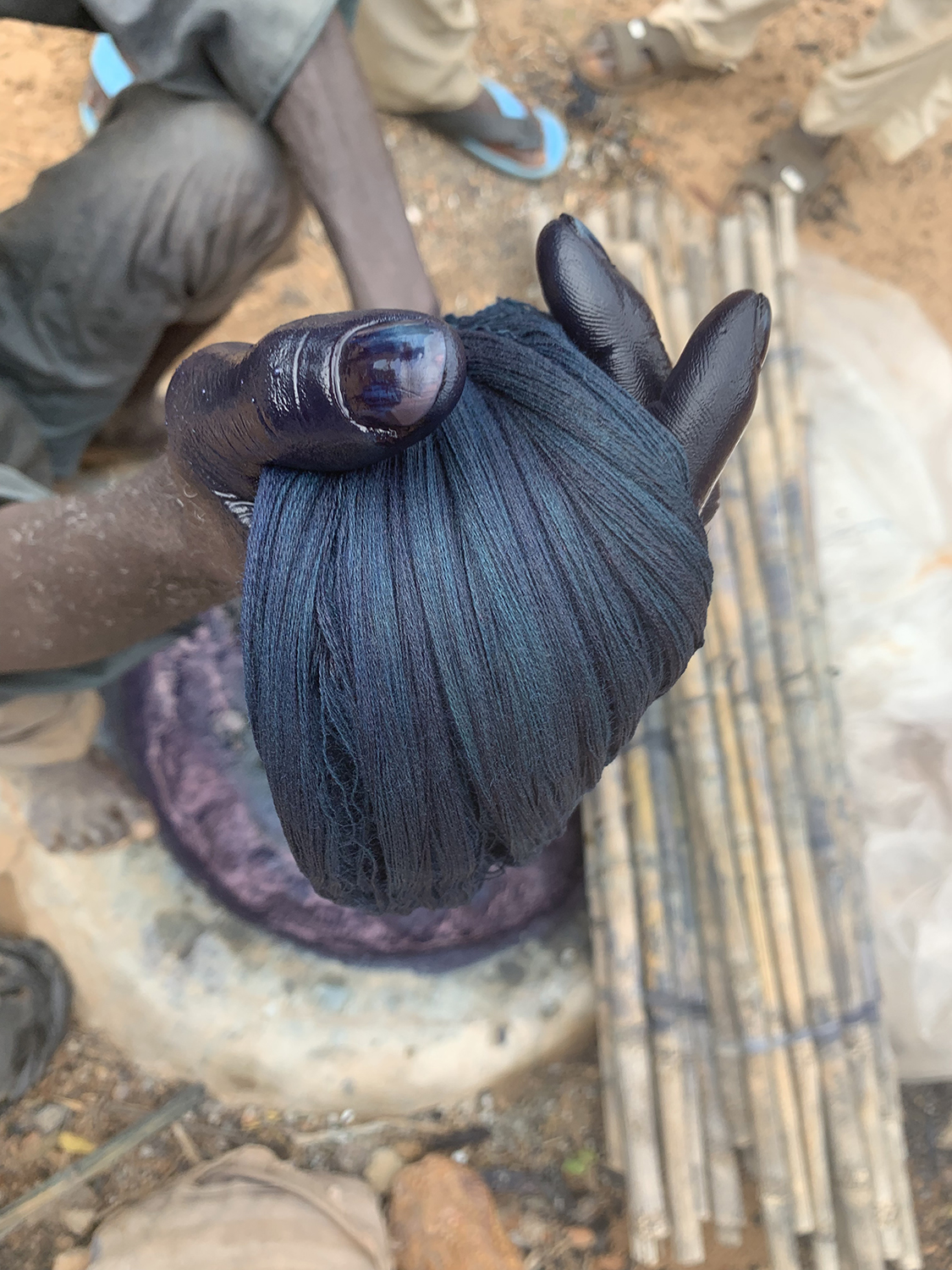 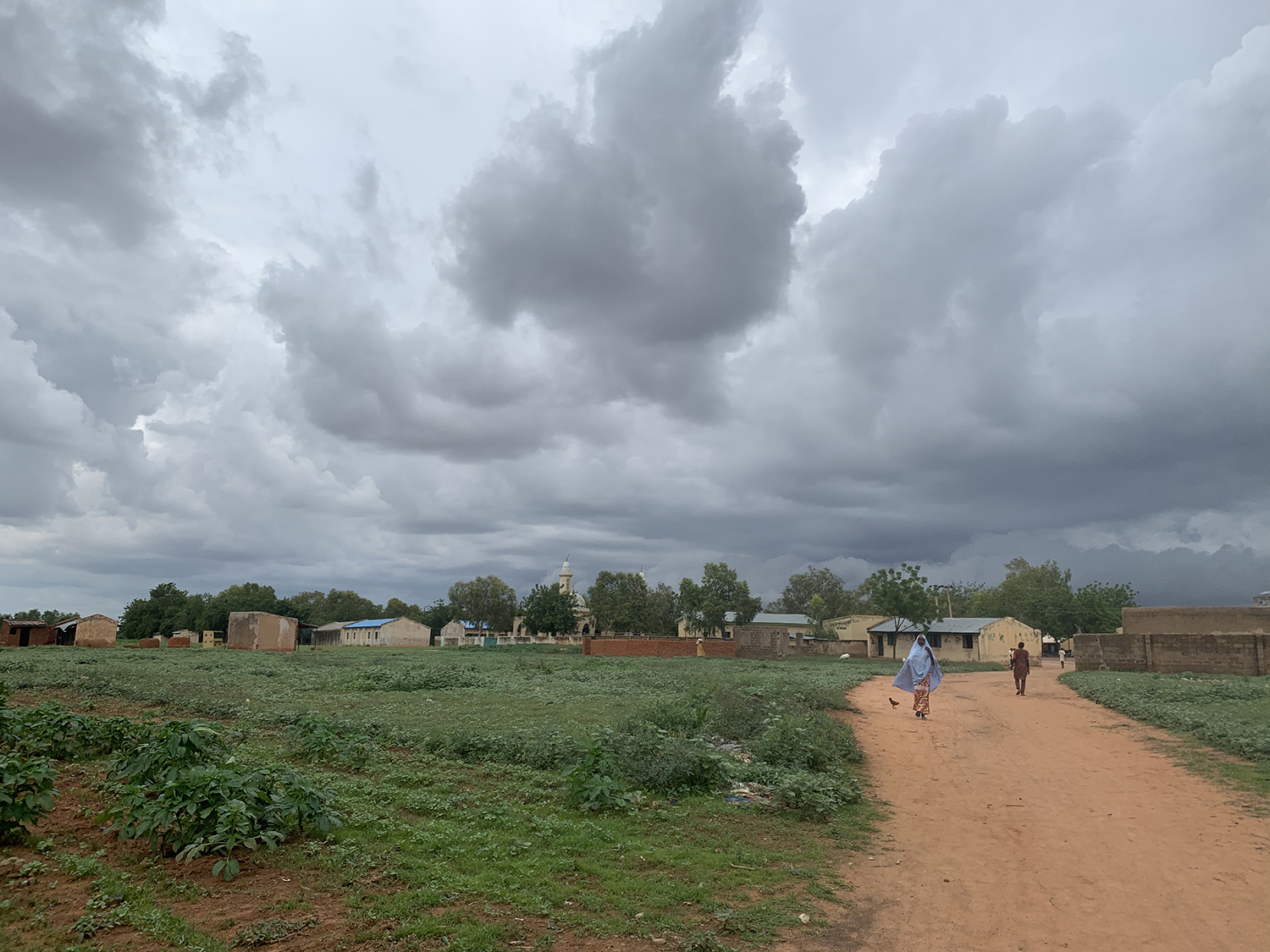 After learning about the ancient dyeing practice, we left the City and headed further north towards the Niger border to the village of Maitsidau where all of the homes were made from the red earth they stood on. 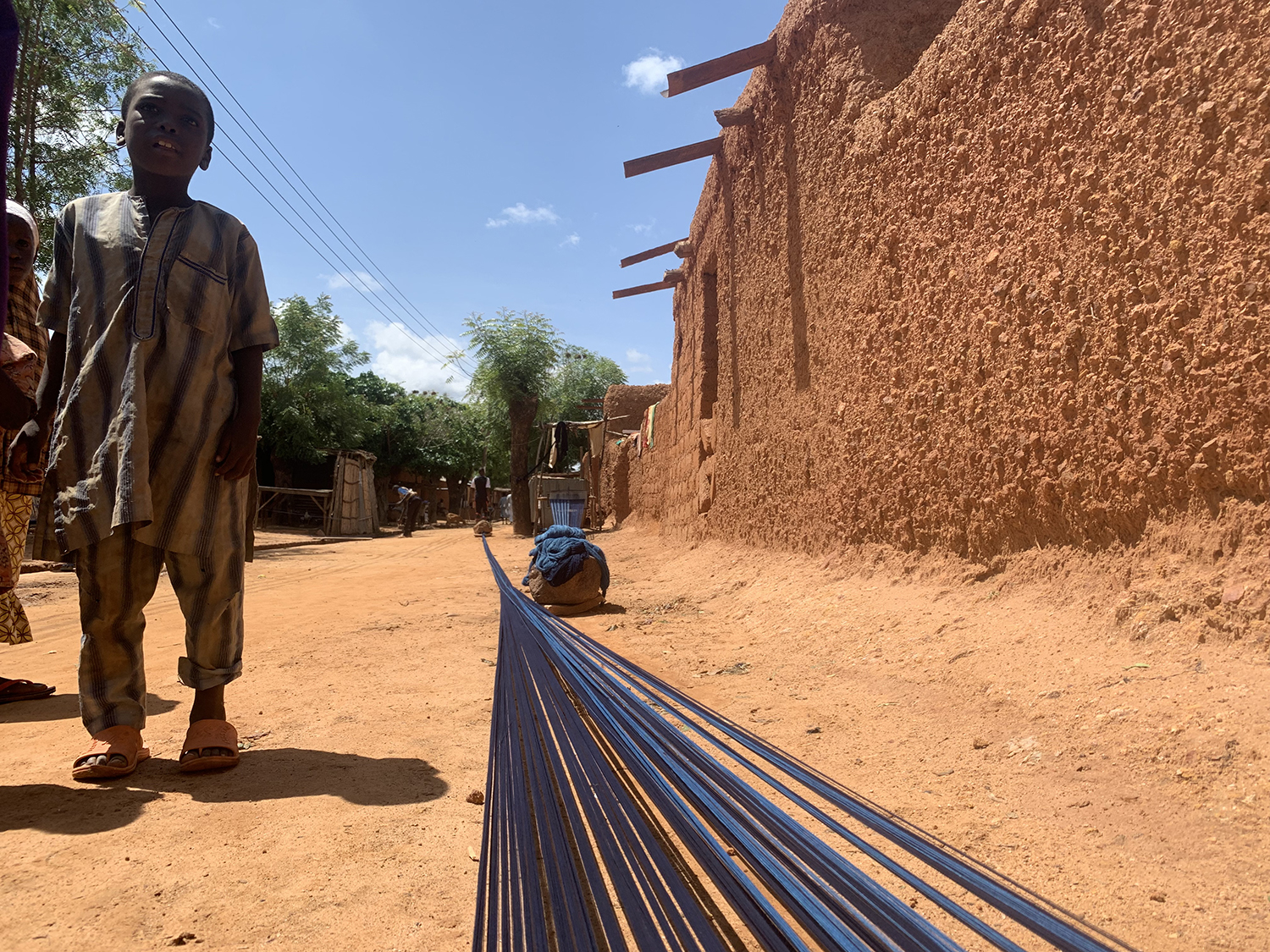 This is where the local artists make cotton thread, dye it with indigo, and weave it into beautiful cloth. The weaving is done on man-powered simple wooden looms. Each strand of cotton is organized meticulously, pulled through silk, and then stretched out 20 feet in front of the weaver where it is piled on a stone in different hues of blue. 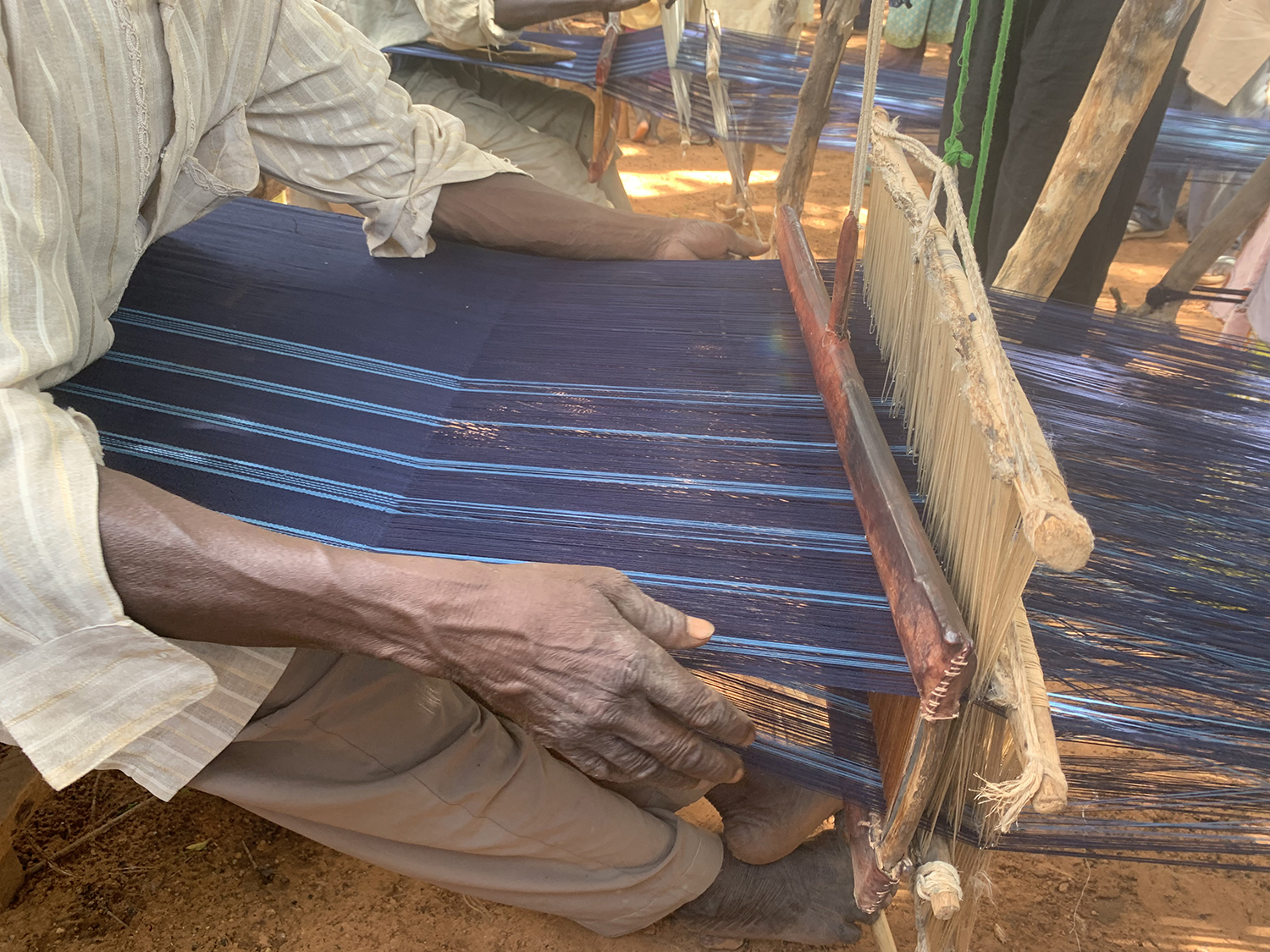 The loom used by the weavers in Maitsidau, Kano State, Nigeria.

We spent time with each craftsman, learning how these textiles are made and how this craft has been passed down generation to generation for over 500 years. 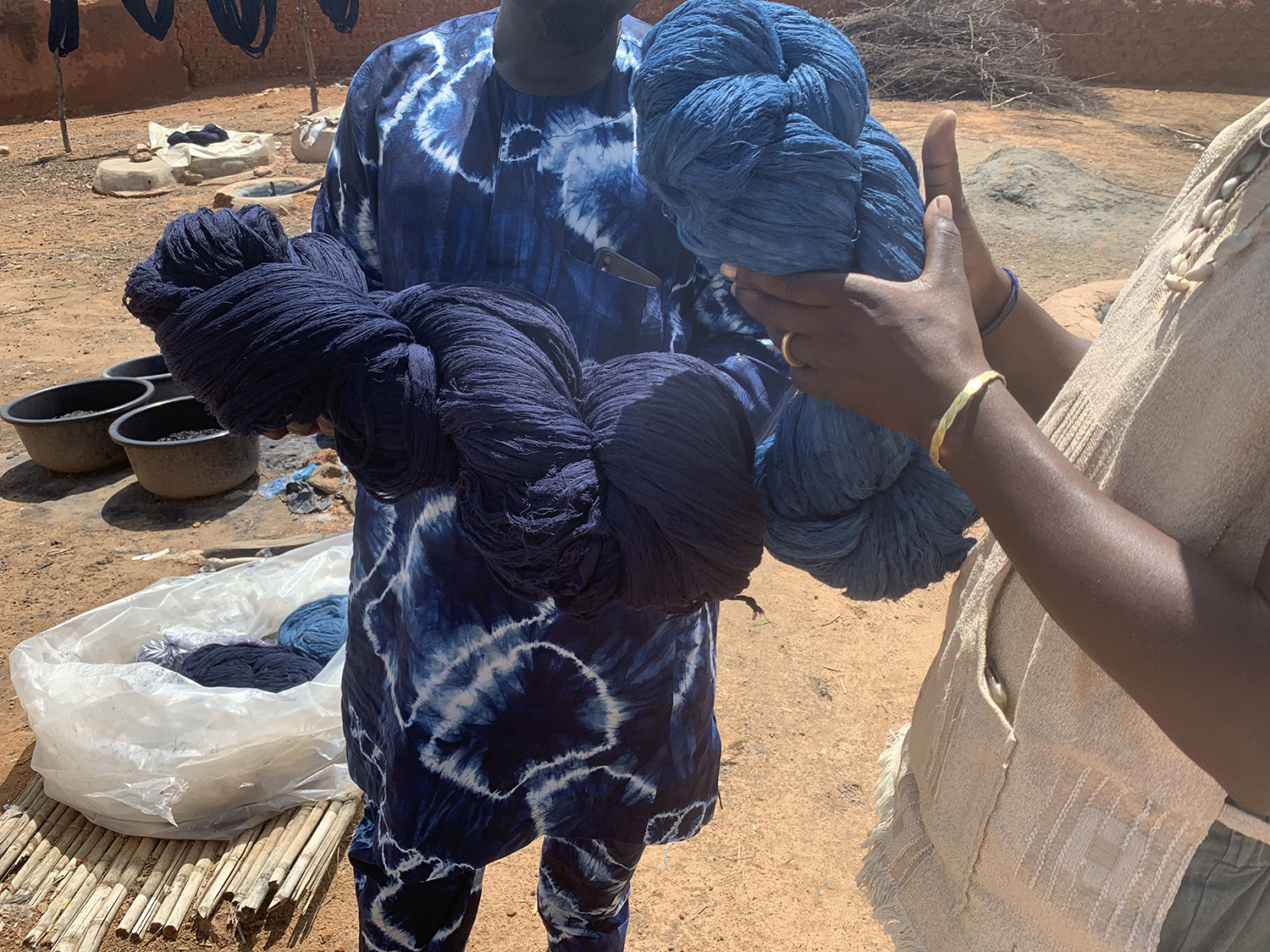 The dried cotton after being dyed in the indigo pits for 3 to 6 hours.

At the end of the trip, Terrence selected two spools of raw cotton which he had dyed himself, one deep indigo and the other a sky blue. These materials were incorporated into the sculpture he produced for his solo at hFACTOR, acting as the ties to the methodical age-old practices which still permeate Nigerian culture. 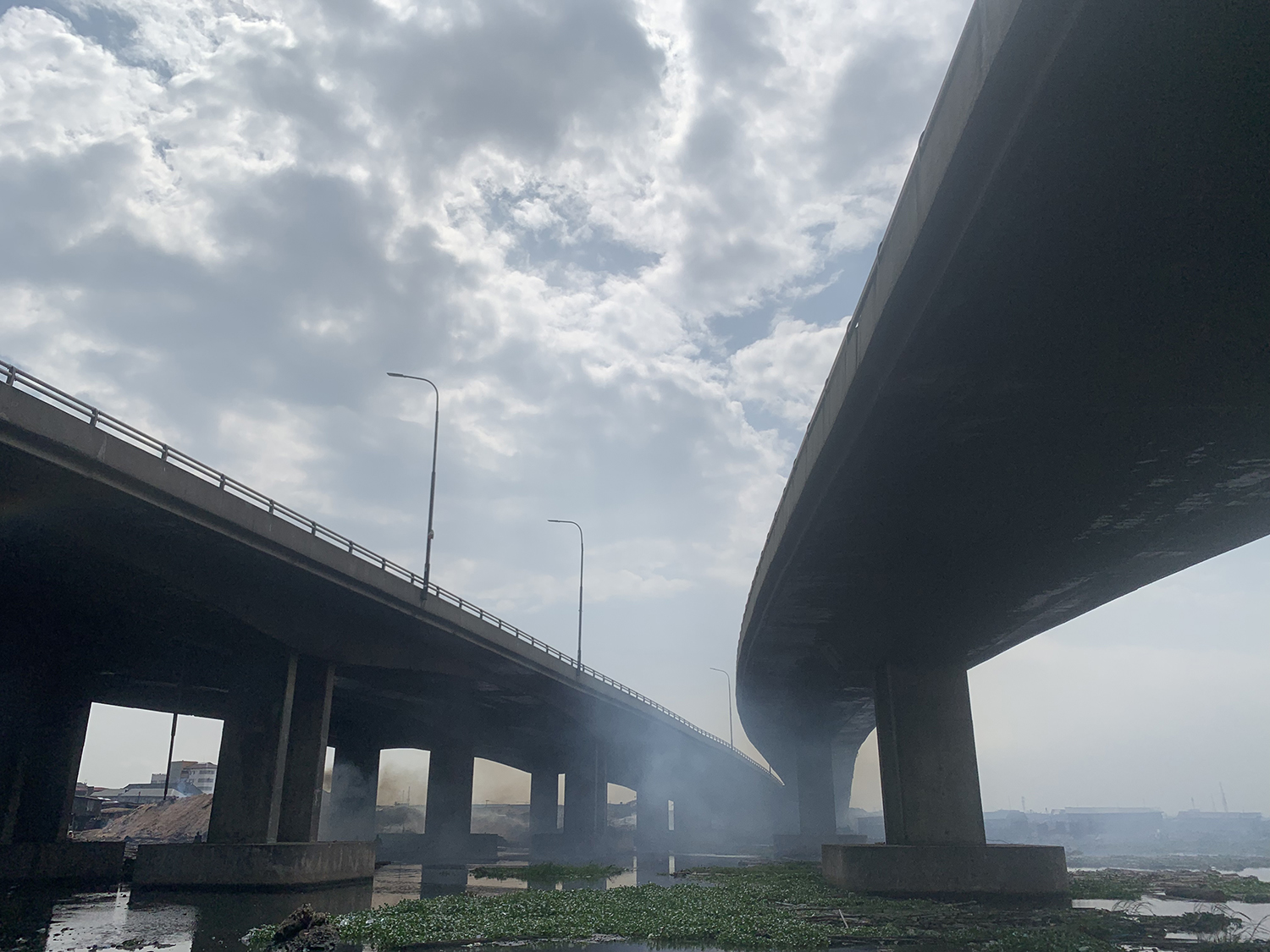 Makoko is the world’s largest floating city that sits beneath Lagos’s Third Mainland Bridge. Homes resting on stilts stretch out into the brackish water of the lagoon where beautifully carved canoes busily weave back and forth. The residents here, among many things, are known for their woodwork; and Terrence needed a structure made for his installation work slated for a final solo exhibition at hFACTOR.

Makoko is a 150-year old community that is yet another underprivileged district in Lagos threatened with forced evictions. 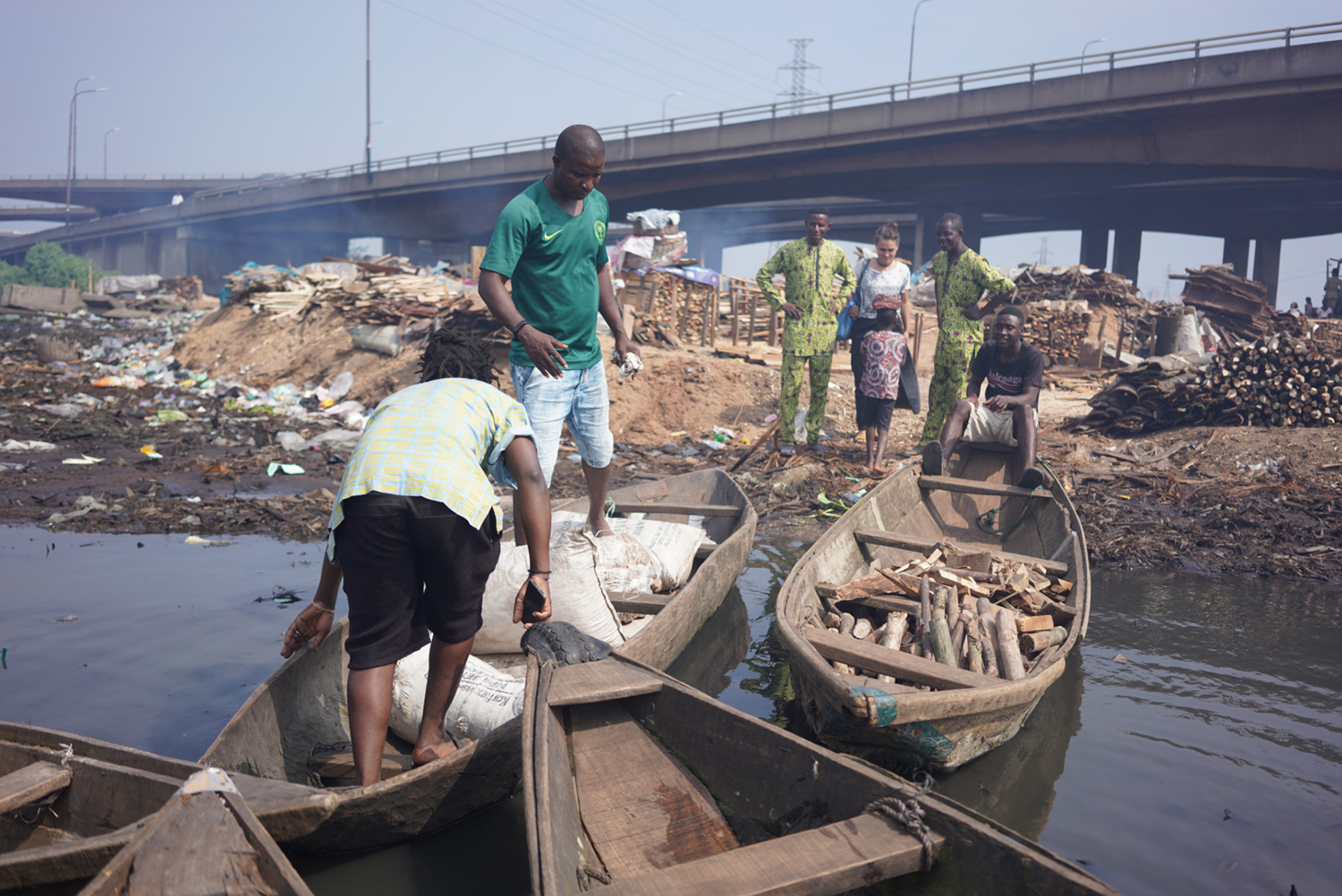 CTG Collective and T-Shine discussing their structural needs with a carpenter in Makoko. 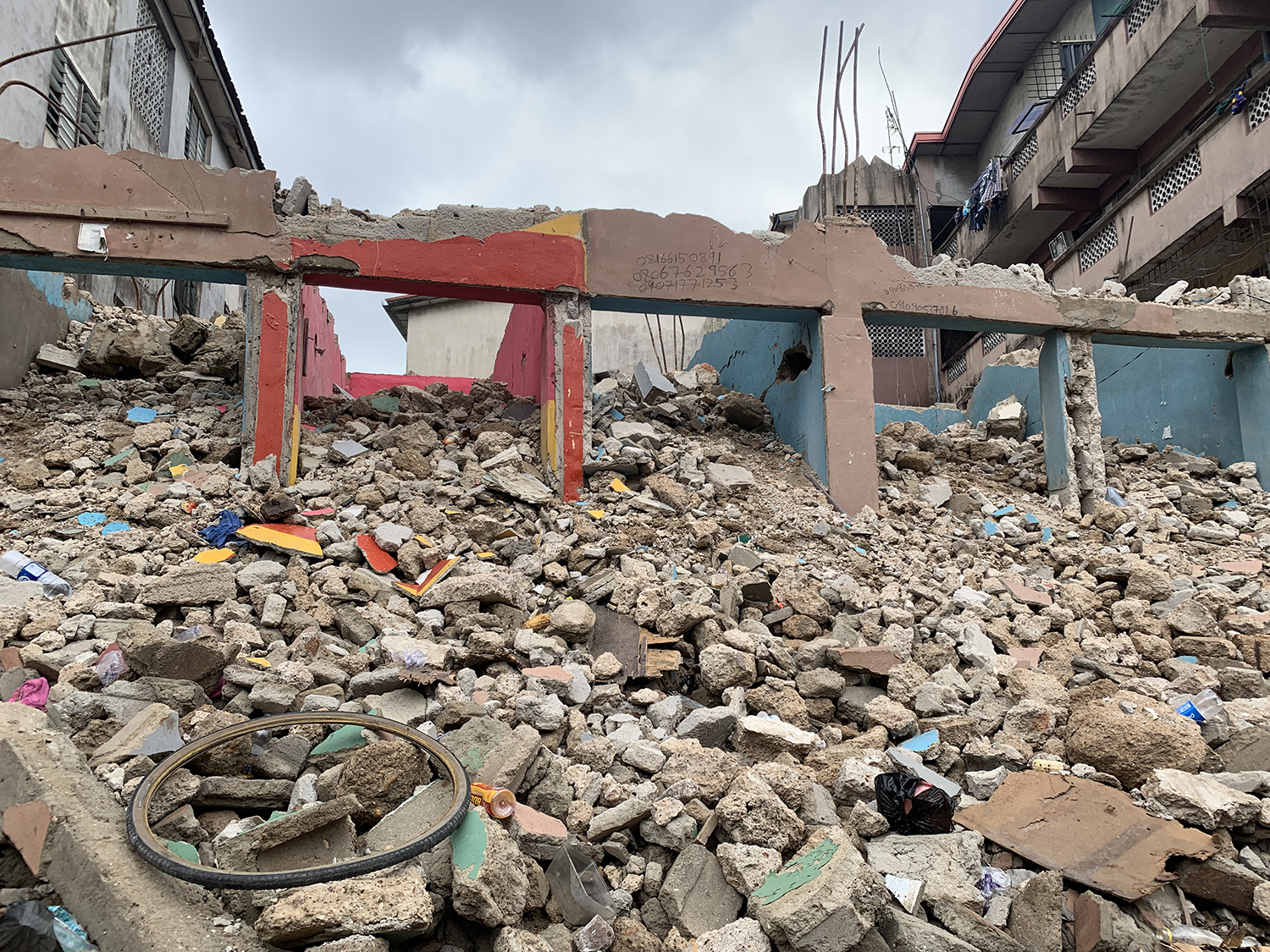 After almost four weeks spent absorbing and understanding Lagos, the significance of the tarpaulin became ever so clear. The deeper we dove into the social and spatial fabric of the city, the more we realized the city’s dependence on these plastic sheets.

Lagos is riddled with land rights issues concerning many of its unrecognized citizens who have been living in temporary structures for generations without ever being allowed to own the property or space they occupy. These tarps act as bandaids, and are an emblem of visible violence not yet remedied. This deep instability, combined with aging colonial architecture and thirst for foreign investment, has left too many of the city’s residents in vulnerable, ever-shifting positions.

Since the beginning of 2019, over 100 buildings had been demolished throughout Lagos Island, each time leaving the residents to fend for themselves. This mass clearing of housing started after a school collapsed in early March of that year. The government has since used this endemic infrastructure issue to clear out vast areas and quickly sell off the land to luxury developers. Terrence is all too familiary with this form of economic violence as the Zimbabwean government, only a few years ago, cleared out “slums” overnight, leaving many of its residents homeless.

But, this is not only a Zimbabwean or Nigerian issue. Aggressive forms of gentrification plague unprotected communities worldwide.

For Terrence, the tarpaulins became a symbol of the permanent-temporary state all too many poor communities live within. The sculpture he made in Lagos uses found tarps to pay tribute to the inescapable reality of economic and environmental turmoil sustained by deep governmental corruption and corporate greed. 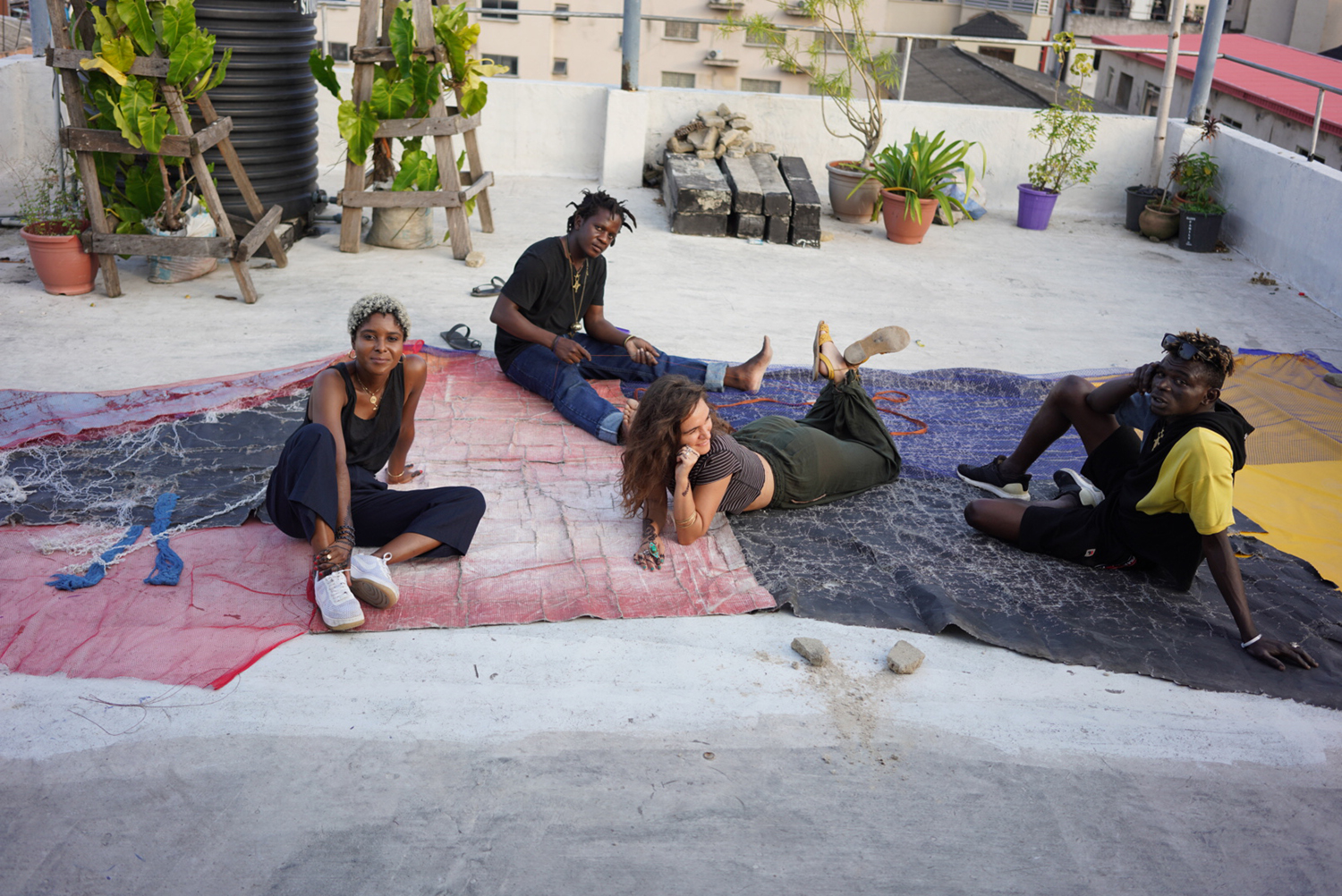 The tarps used in work were bought or traded for newer versions. After weeks of salvaging from across the city, we all sewed the final touches. 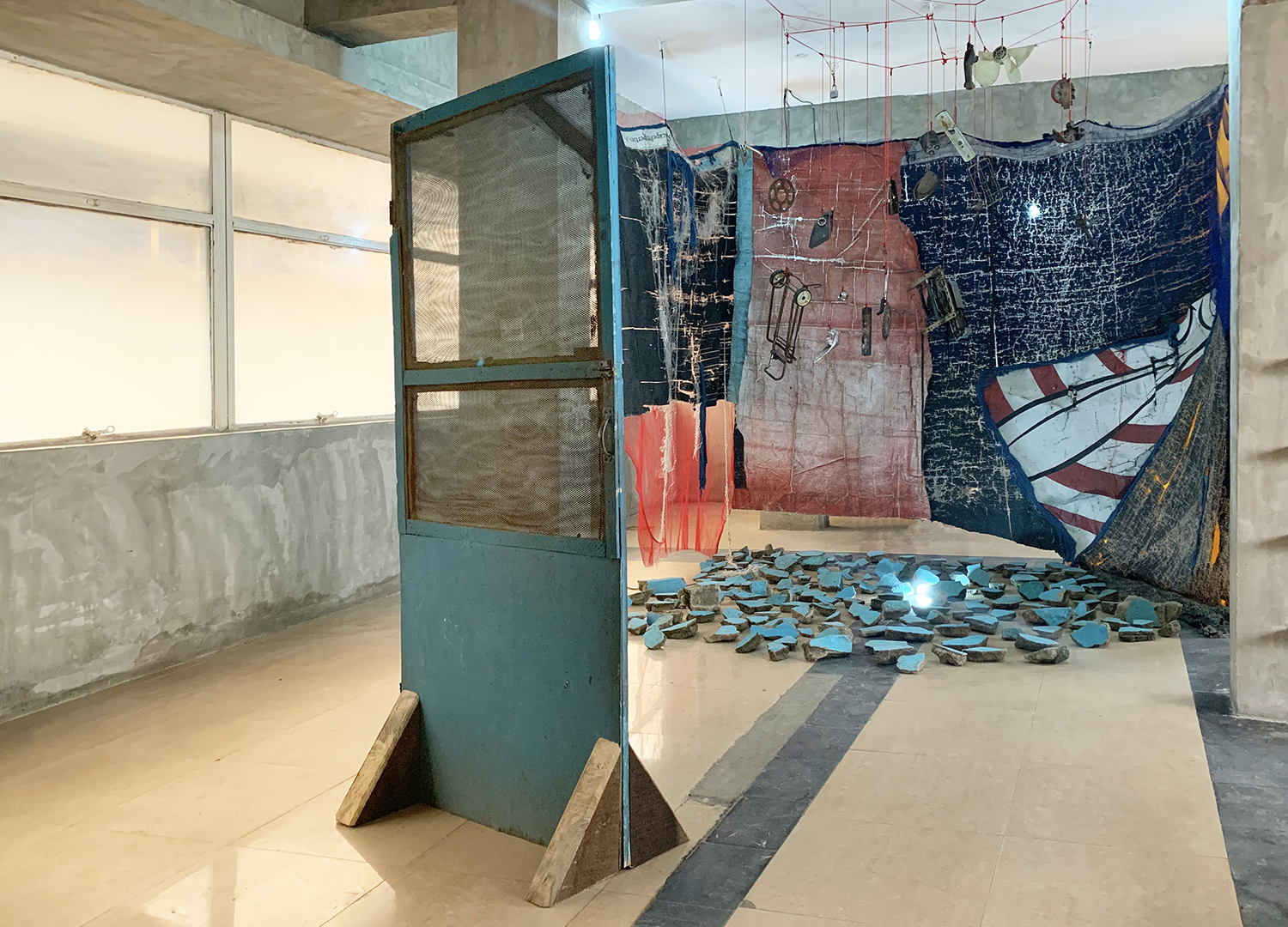 A HOUSE IN A HOUSE

Terrence Musekiwa and Raphael Guilbert concluded their month-long residency in Nigeria by opening a solo presentation of Musekiwa’s work at hFACTOR. The work addresses the many layers that make up Lagos Island and interwoven histories that tie this hectic city together. Suspended from the ceiling, the centeral sculpture divides space as a dissected home, representing the ongoing housing crisis in Lagos. 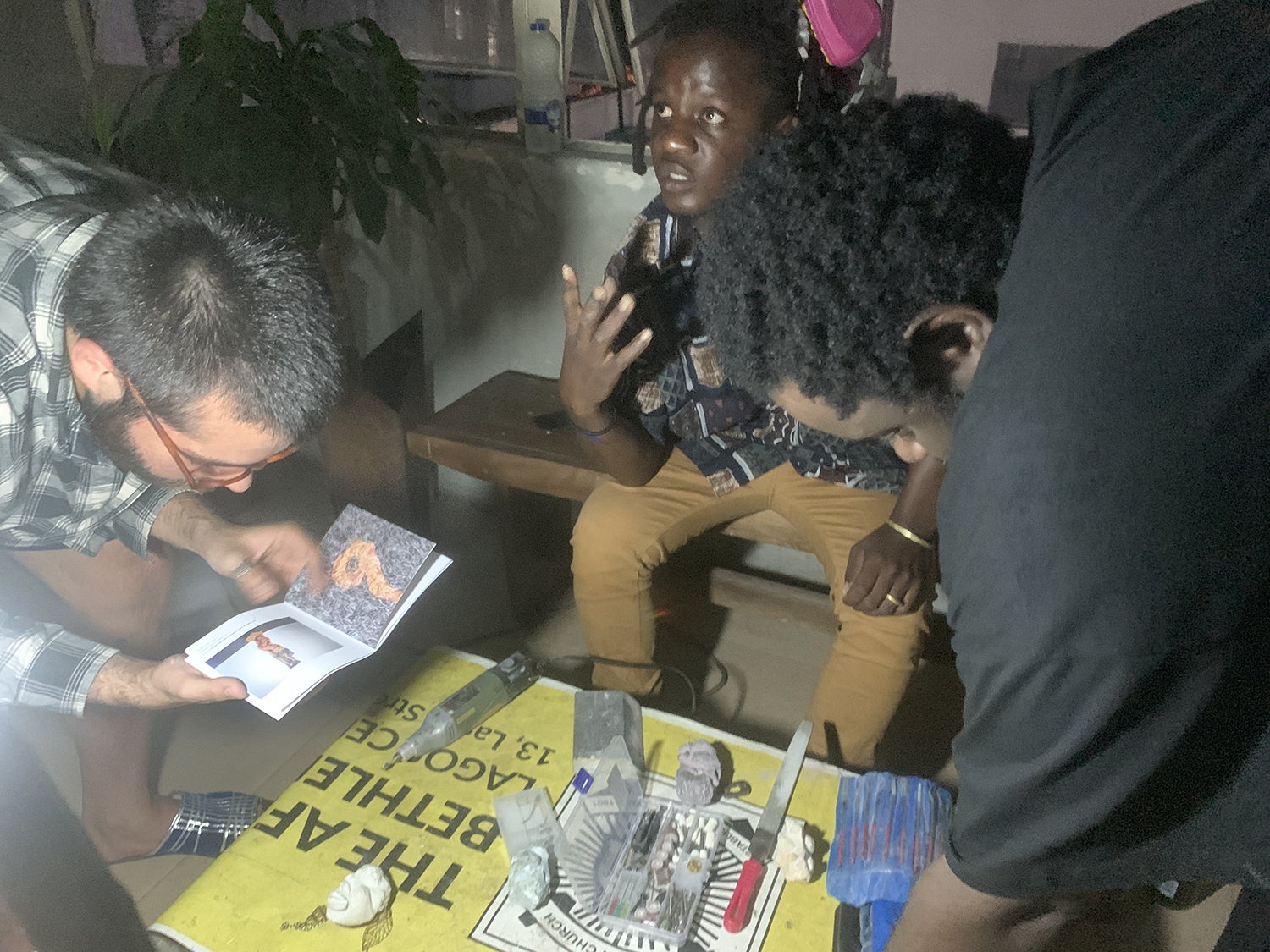 Terrence Musekiwa’s artist talk following the opening of A House In A House.