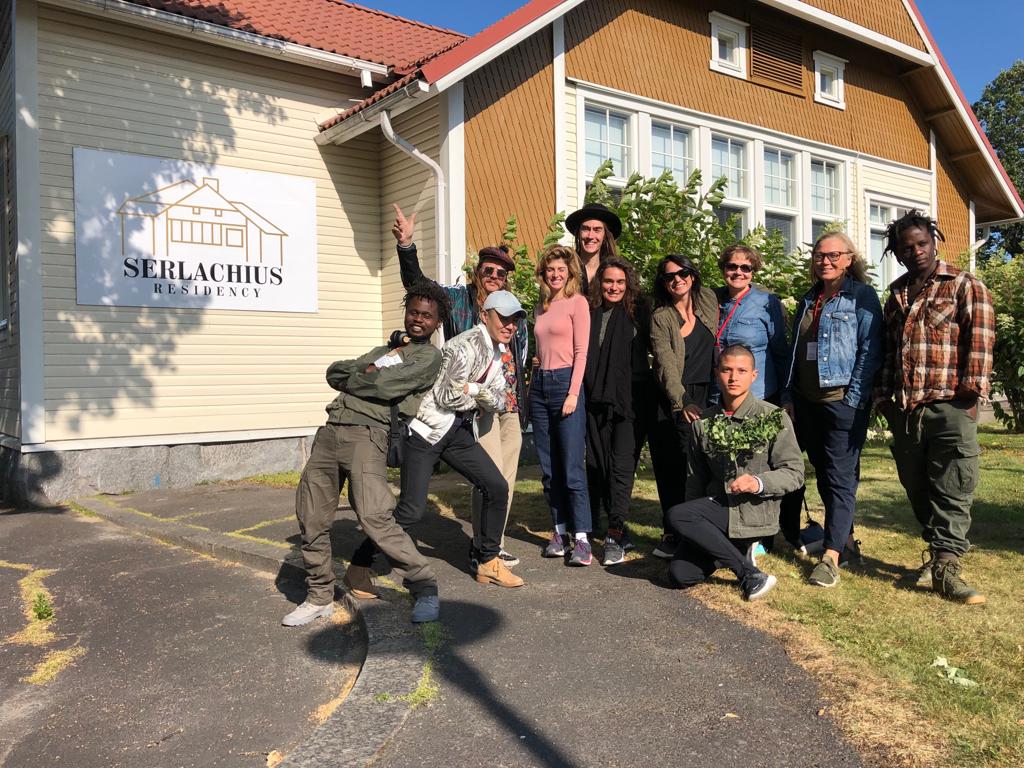 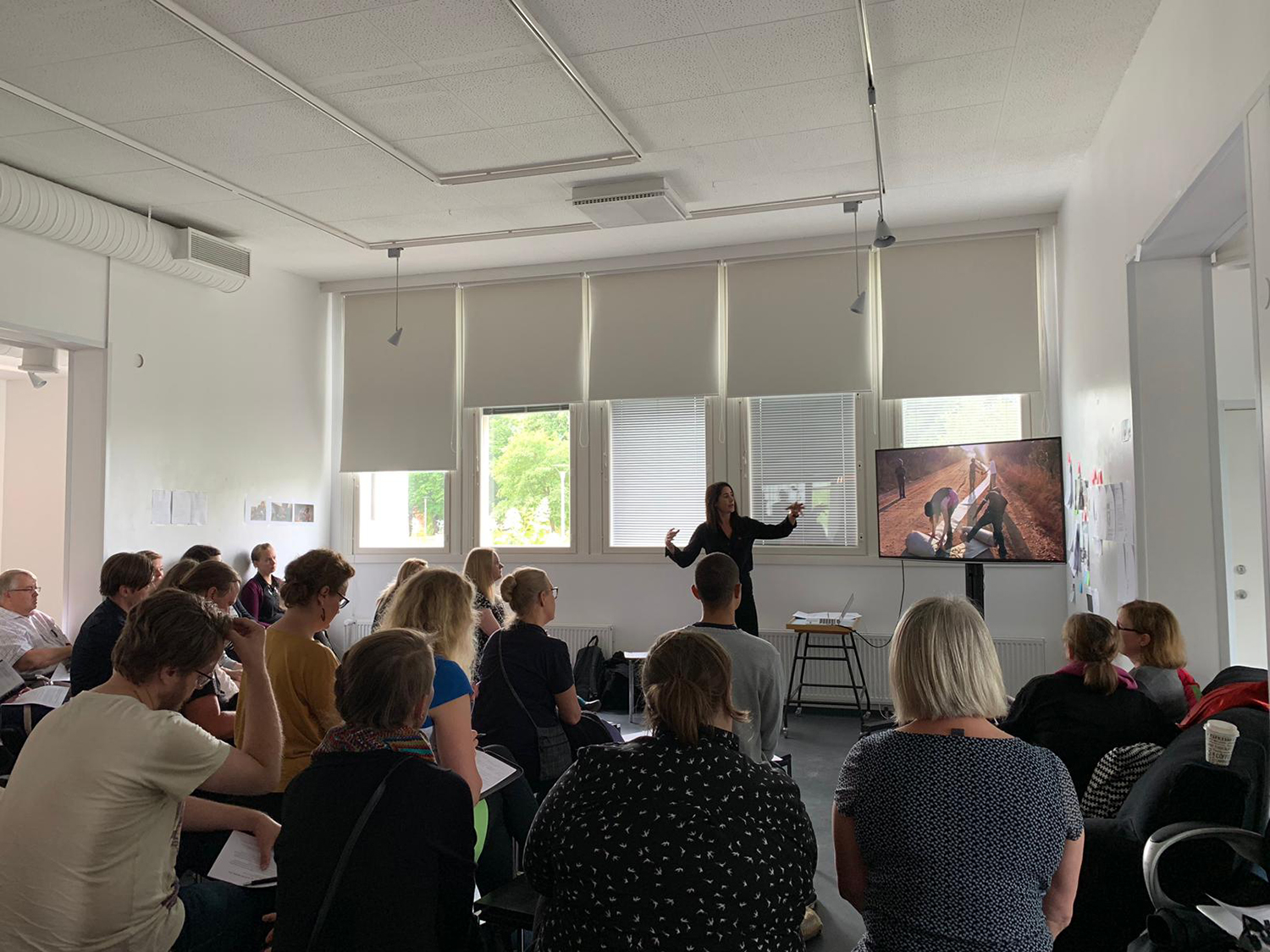 It was an honor to be invited to speak at the AiR Network Annual Meeting hosted this year by the Serlachius Museums. Representatives from Finland’s top grant giving foundations and art residencies gathered to hear a series of lectures, among them Catinca Tabacaru’s take on the role of a traveling art residency as an integral part of a Gallery’s activities. The CTG Collective’s adventures served as the backdrop to the conversation, and our hearts skipped a beat as we heard a collective “WOW” rise from the audience when an image of CTG Harare appeared on the presentation screen. 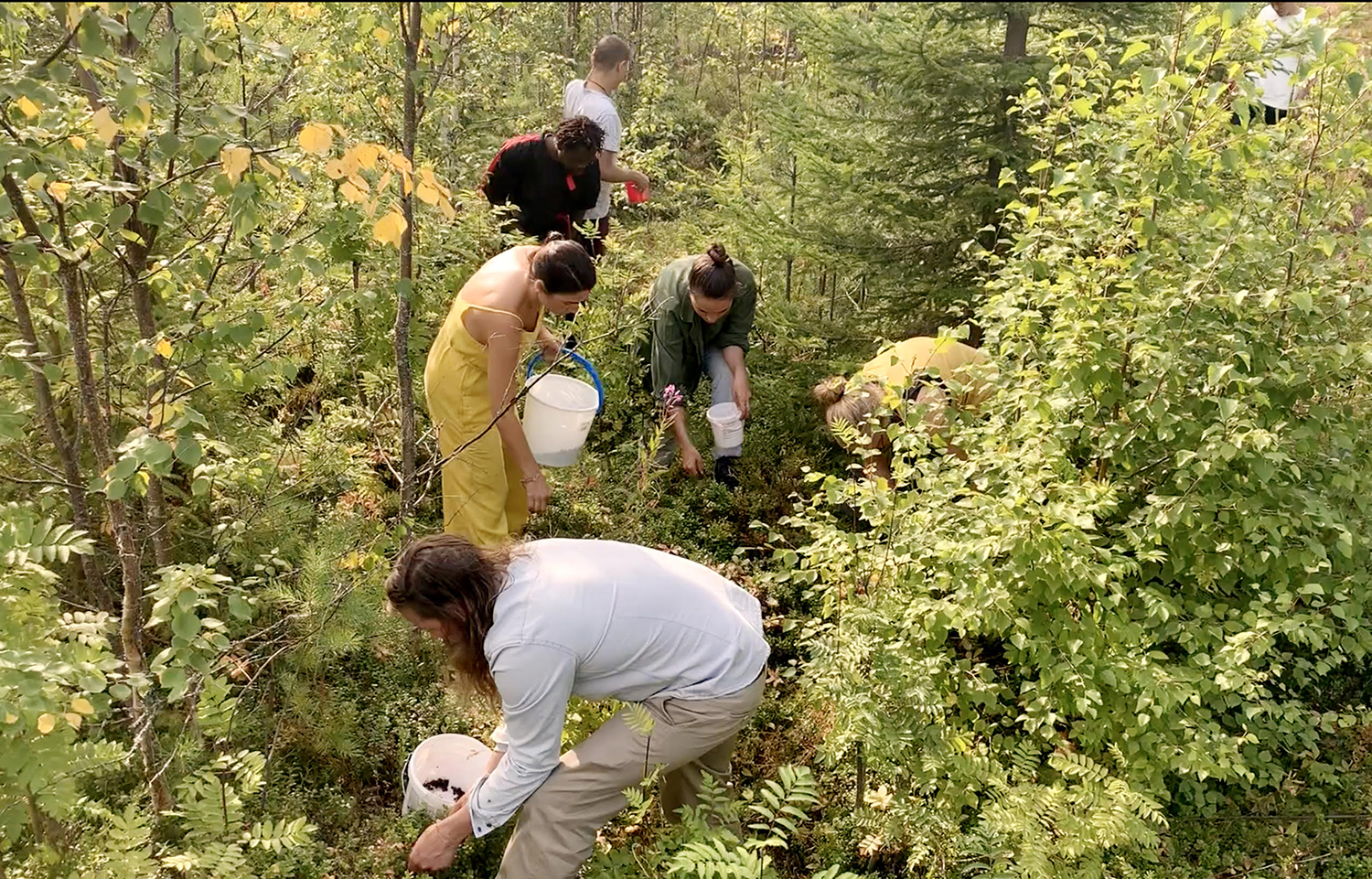 The mining of Finland’s minerals led us into endless hours of research and conversation around the ethics, politics and socio-economic issues surrounding the practice. Finland is a world leader in lithium mining, and it suffers from an old law on exploration and exploitation, which allows anyone to explore and test tap land, and subsequently apply for a permit to mine that land, regardless of who its owner may be. Leaping a few conceptual steps forward, you arrive at the Finnish right wing’s threats that “the immigrants will eat all the country’s berries.” Lacking in irony is the fact that Finland picks only 3% of its berries each year. Rachel Monosov’s The Berry Pickers, brings the CTG Collective into a collaborative video work exploring and exploiting the topic. 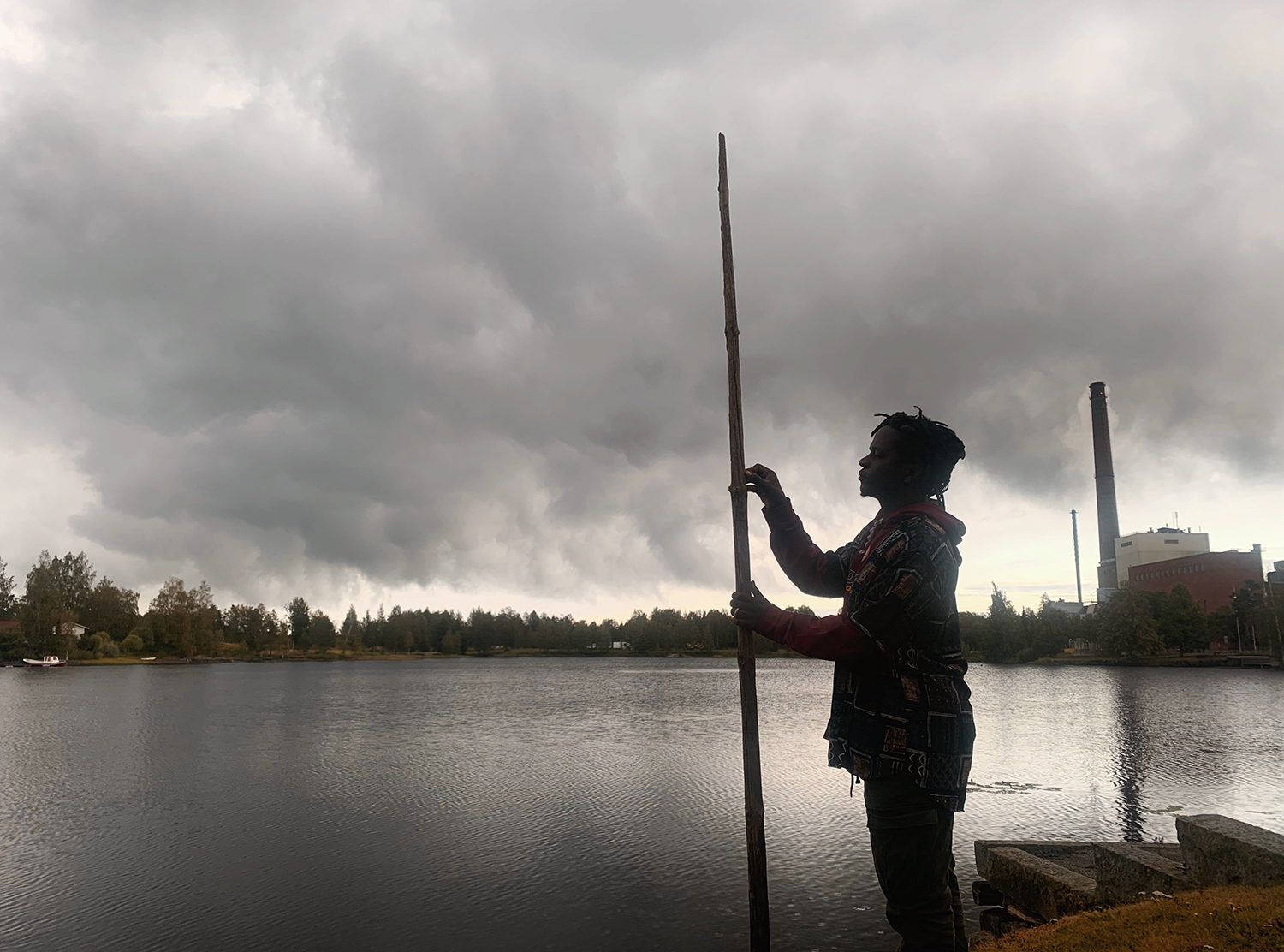 Terrence Musekiwa emerged from the nearby lake on our first night in Mantta holding a tall, thin stick. “I don’t know where this root was coming from, or where it was going, but I just felt it necessary to pull it from under the water.” Allegedly, moments later, the boys’ calabash, filled with Zimbabwean snuff, fell into the water. “So it was an exchange.” Which made it ok, we concluded. The water spirits, also known as Näkki or Vedenemo, had been appeased. Fittingly, the Sámi people, who live in the northern Finnish Lapland, hold strong beliefs around the practice of asking sacred sites like rivers, lakes and mountains for permission before taking anything away. From that first night, we were one with nature. Terrence anchored the root stick into the lake outside the Aleksanterin Linna Gallery so it could be seen from its windows during our final exhibition. 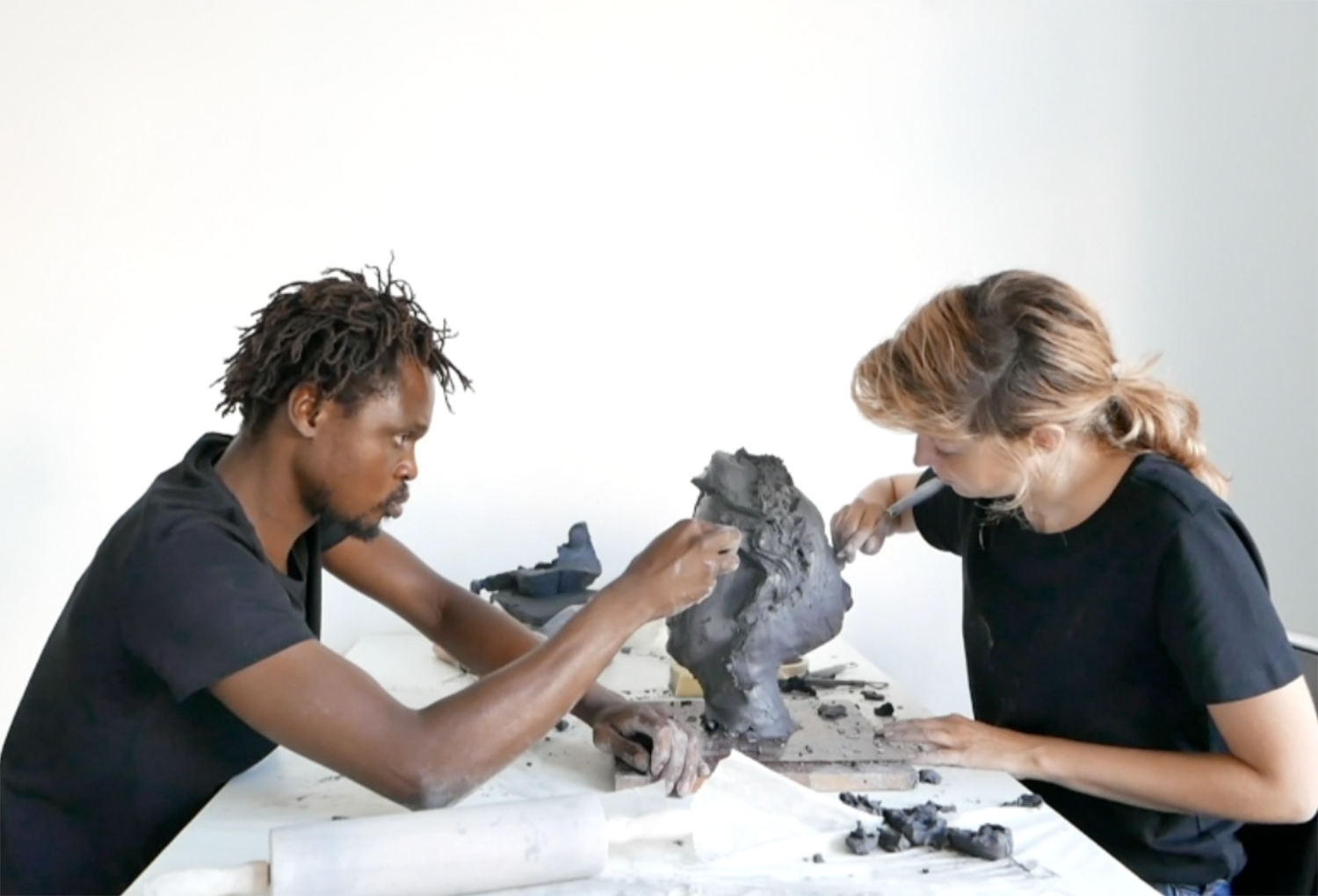 Over the years, and through three international biennial inclusions, we have come to expect great works from the collaborative duo formed each time Rachel Monosov and Admire Kamudzengerere come together. Here in Finland, they bring us Two Sides of Us, a performance work, documented in video, and leaving behind its ceramic artifact. The two artists sit across from one another and sculpt the other’s portrait, only to destroy it afterwards. “Bobo, I don’t think I can do this anymore,” A. says as he scratches out the eyes of R.’s likeness. The performance echoes personal and global concerns the duo approaches in their practice.

Inspired by his arrival and stay in Mänttä, Shinji Murakami reflects on the openness he found. Having grown up playing video games in the 1980s, Murakami remembers the space those simple games allowed for the child’s imagination. Today, the hyperrealist computer games leave little room for a player’s imagination. So too, an artist’s mind is constantly bombarded with information in cities like New York, Tokyo, and Helsinki. This work, Kesäyö (Summer Night), is the animation of manipulated images sourced from the Google search of the word Kesäyö. The artist has broken down these collected images to a minimal pixel count of 2 to 3 pixels per image. 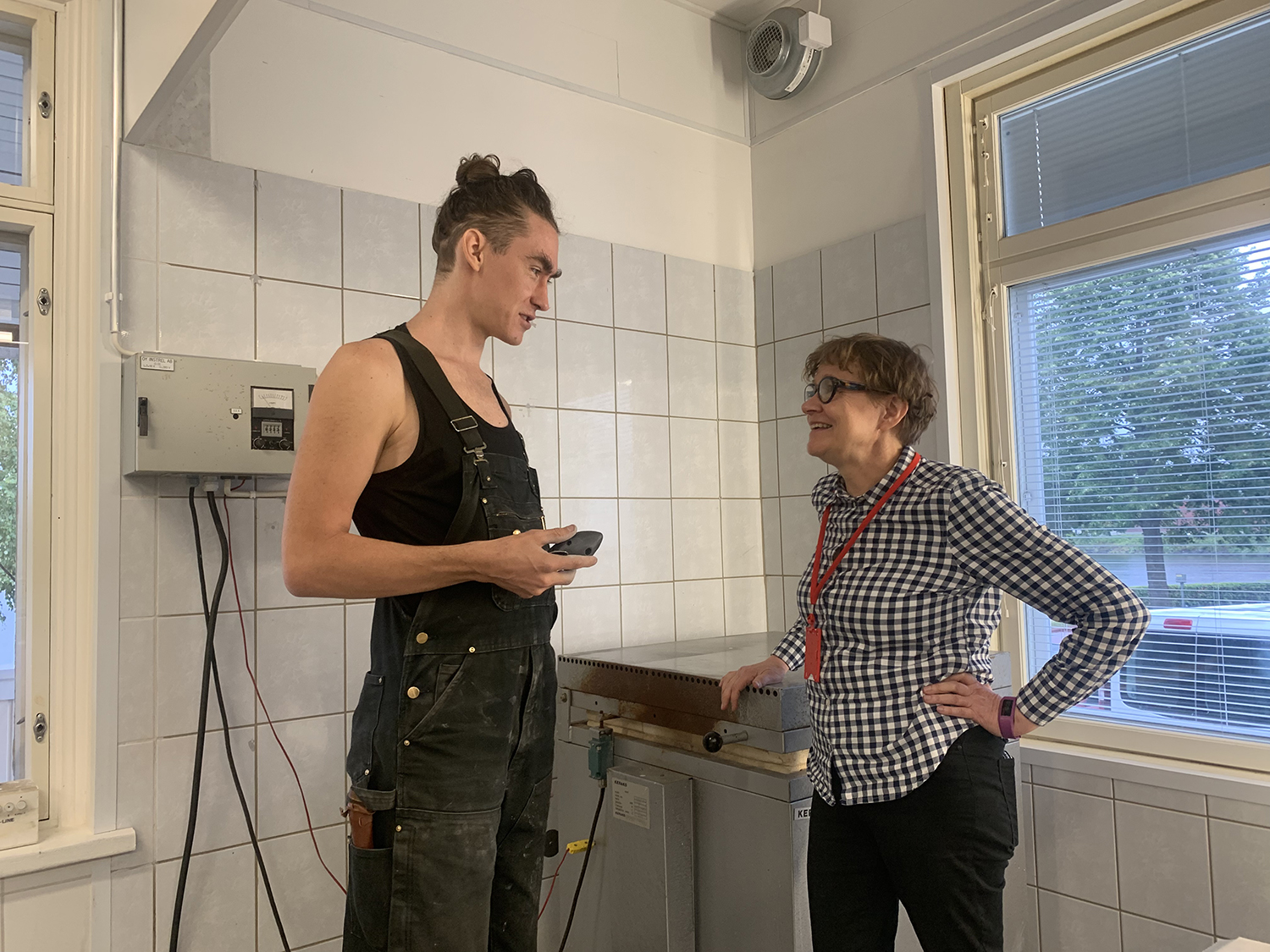 Justin Orvis Steimer and Johanna Rytkölä are our kiln masters. Working with a kiln from the 1970s has presented some unexpected challenges, and Johanna, a ceramicist for over 30 years who built a large DIY kiln in her Helsinki studio, triumphantly overcame each unpleasant surprise. Justin proved to be a gifted apprentice, picking up various firing techniques to expand his own practice further into the 3D realm. Both artists presented black clay sculptures reflecting Nordic folklore and ecology for our final exhibition at the Serlachius Museum’s Aleksanterin Linna Gallery. 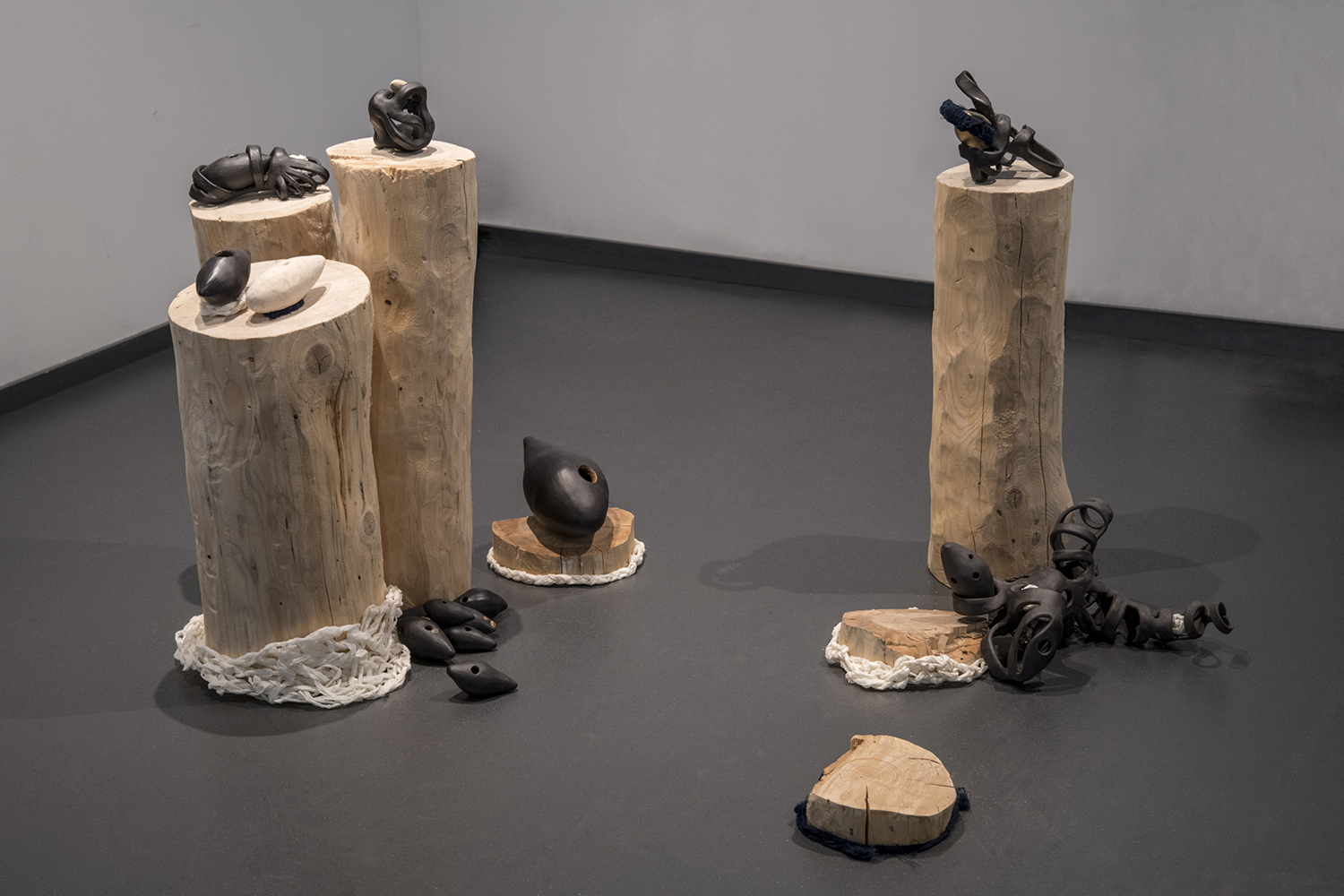 Concerning the Spiritual in Art

In Finnish Pagan tradition, a person’s soul is said to have three parts: Henki, Luonto, and Itse. The Luonto is a guardian spirit or protector. Further specifying the term, Luontohaltija translates to nature spirit. Justin Orvis Steimer’s practice is based in communing with nature; giving form to invisible forces. His sculptures made in Finland of black clay, wood and later bronze captures the spirits of natural spaces around Mänttä including Taavetinsaari and Koskelanlampi, where Justin sat and sculpted. A sound piece accompanies the work and was made in collaboration with artists Jaako Leeve, Shinji Murakami, and Terrence Musekiwa who played Justin’s sculptures as wind instruments in the barn at Vehkanimen, our home in Finland.

Xavier Robles de Medina has been creating a text-based work which merges the short story format with that of the academic essay. In conjunction with photographs he sourced during his time in Mänttä – in the residency, as well as in the Serlachius Museum (purposely rasterized to fictionalize an archive) – the work imbues the essay with a poetry and heightened affect, discussing simultaneously the history of colonial categorizations, of race, gender, and the marking of borders and territories. All that to say that he included the chickens too. 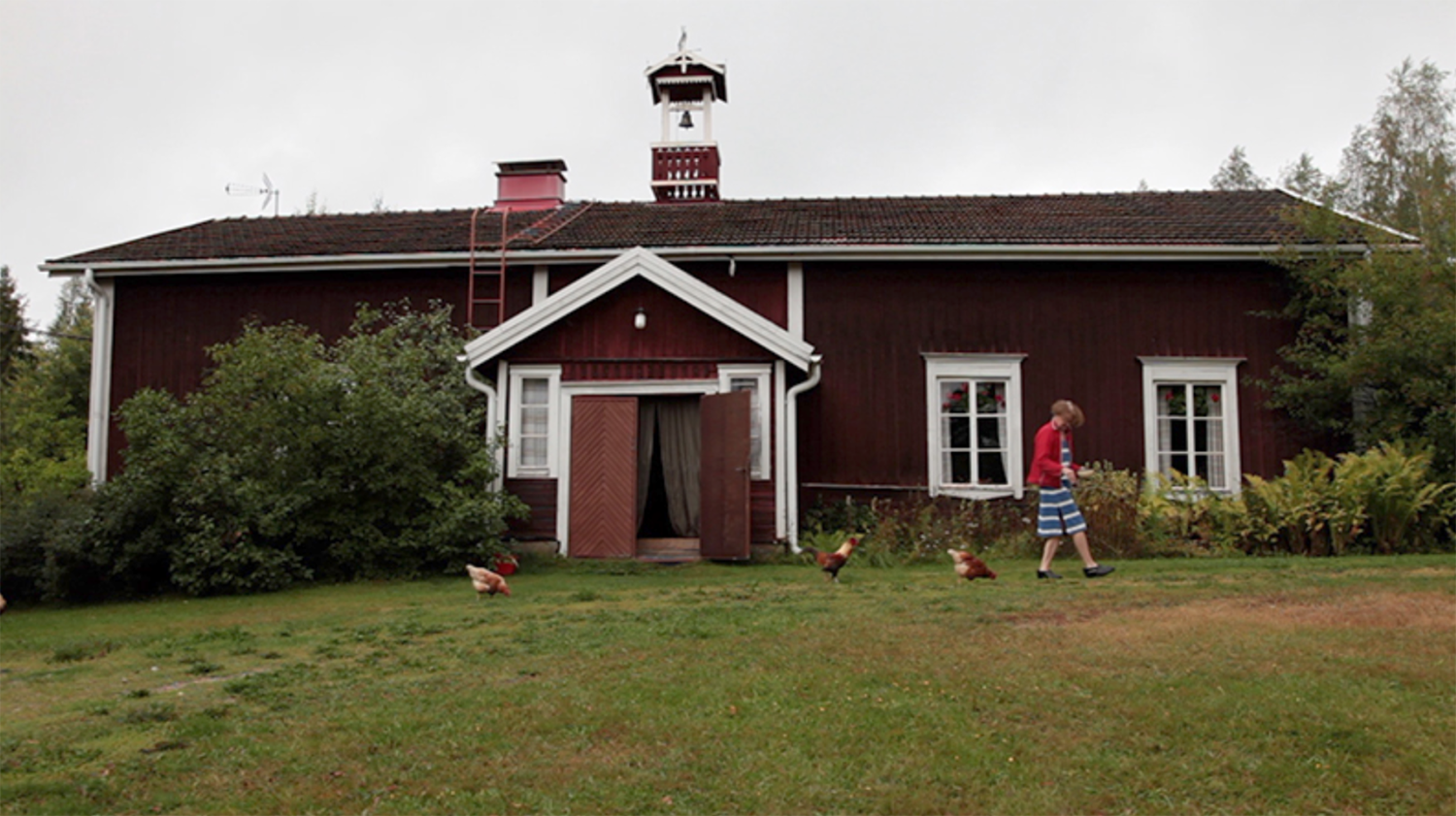 Living In The Midst of Green Gold

Inspired by the life of our host Annali, the matriarch of Vehkanimen, three artists come together to create a portrait of a magical person and place. After years of living and working in Paris as an architect, Annali returned to her childhood home to tackle the arduous task of returning her family’s abandoned estate to its original grandeur. Annali has four faithful companions, her rooster and 3 hens, who follow her in a Pied Piper manner in this video portrait by Jaakko Leeve, Elena Näsänen, and Shinji Murakami. 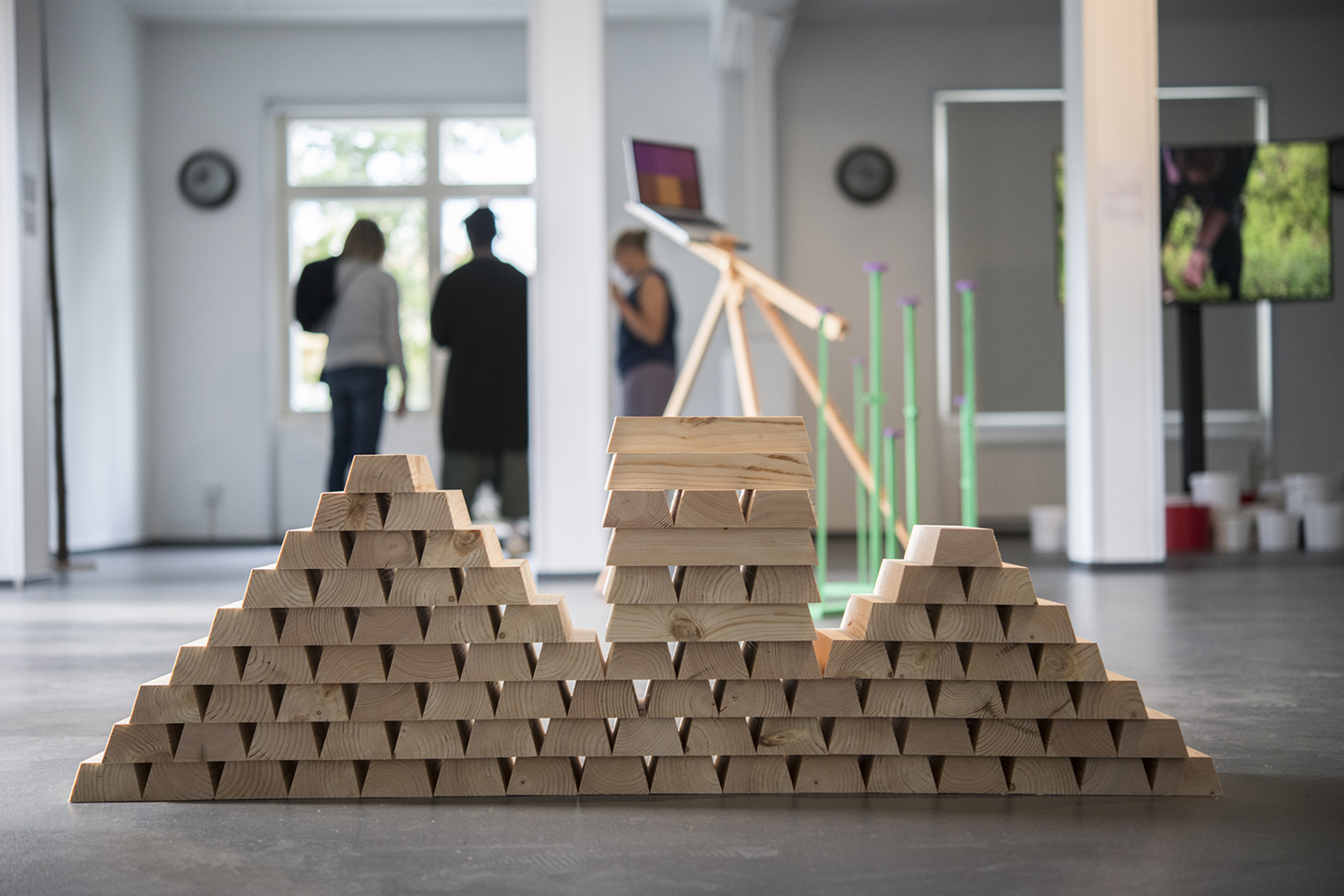 Jaakko Leeve produced his work in collaboration with Mäntän työkeskus, a home for local single men with mental disabilities. Green Gold speaks to the pine trees in the area and how the town of Mänttä and Serlachius got their start through the lumber industry. The lumber industry also being the base of economics in Finland. 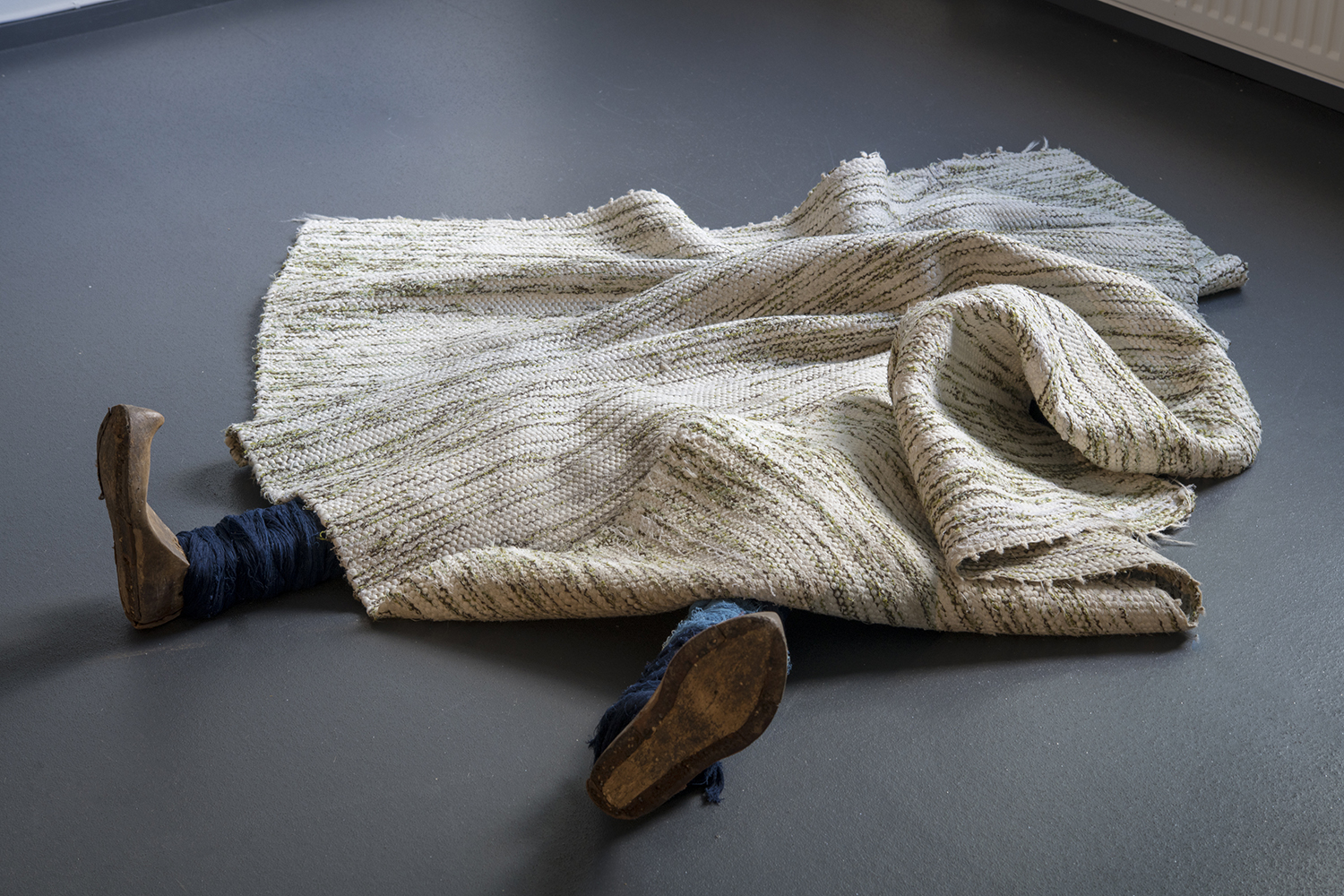 Sweeping under the carpet

Musekiwa is using this work to mimic how governments cover up their dark actions using force and fear, pushing people to migrate and become immigrants in other countries. 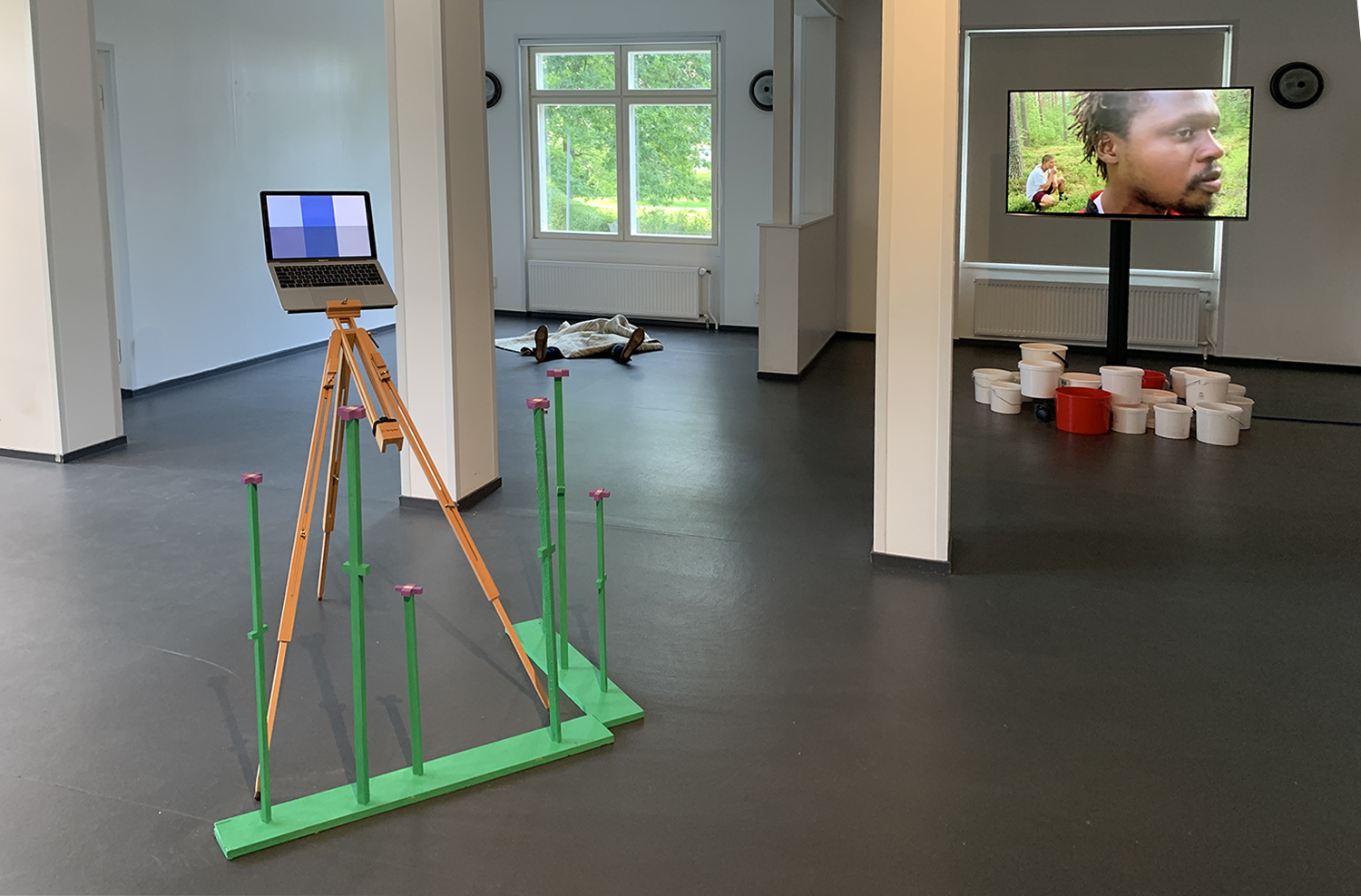 The CTG Collective, whose members and collaborators in this instance hailed from New York, Japan, Israel, Surinam, Zimbabwe, and Finland, present their introductury exhibition at the Serlachius Museums in Aleksanterin Linna Gallery. The performance, video, ceramics, and sculptural works highlight the group’s reflections on their time in Mänttä over the past two weeks. Notions of folklore, ecology, and immigration take center stage as the artists bring their personal histories into conversation with the Finnish cultural and political landscape. 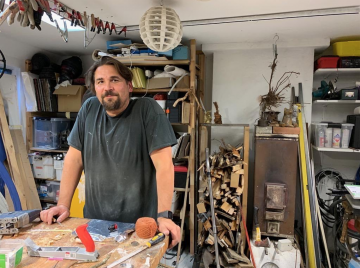 PART II of CTG-R: Finland transpired at the Siberia Foundry, the raw production space led of Anssi Taulu. We won’t lie, it was hard work and pretty scary stuff (aka thrilling!) Anssi was there holding our hand (and fixing our work) every step of the way as we learned the difficult and complex process of bronze casting. The bad news is, this was Siberia’s last breath as its building was knocked down to make way for a parking lot. The good news, was that Anssi had the city of Hämeenlinna postpone the demolition until “a very important artist group from New York City and beyond” was able to completed its long-planned residency and make works. 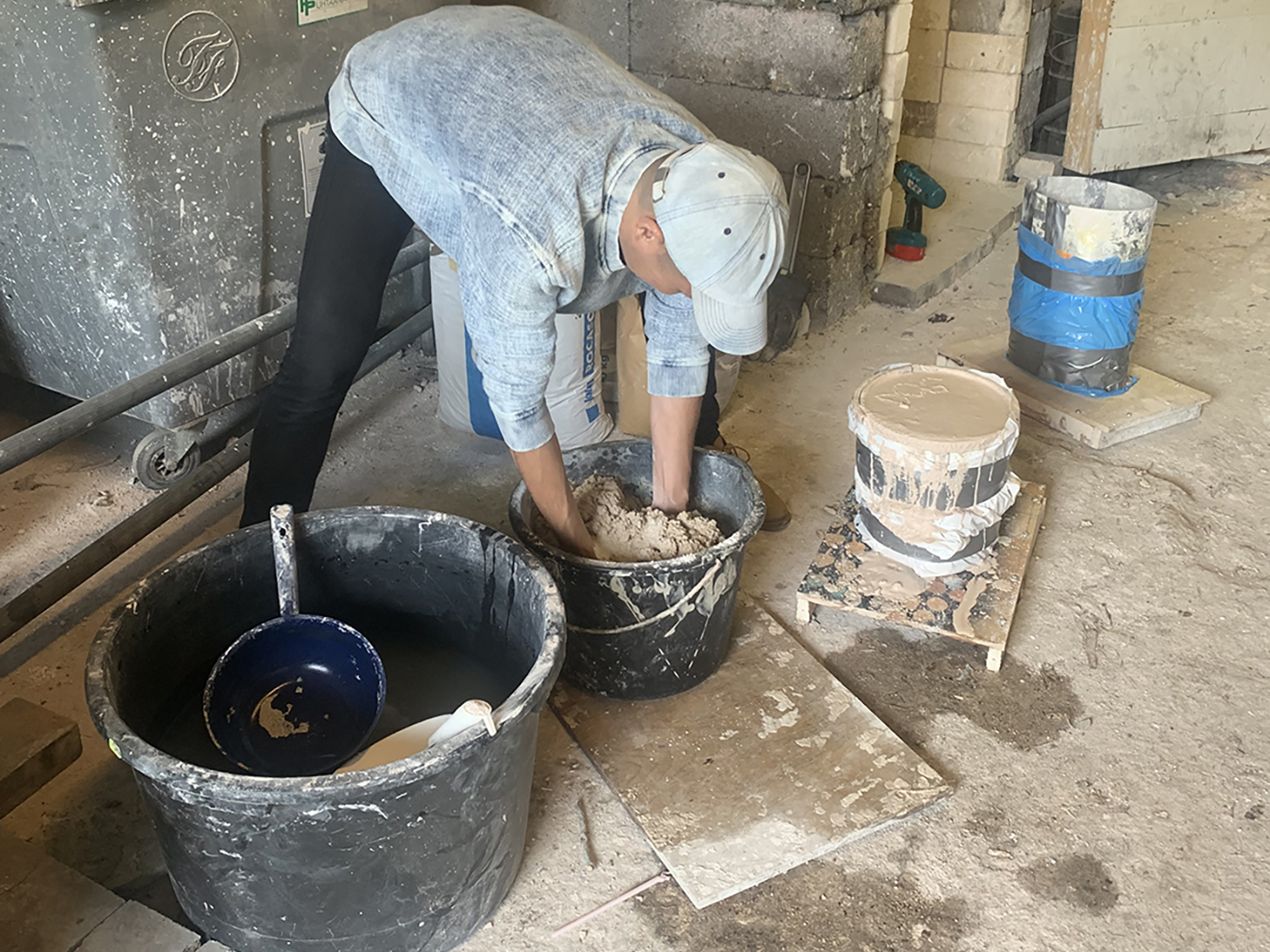 Step 1: Making the molds The complex process of casting bronze works begins with sculpting in a material that will burn away: wax, wood, styrefoam, etc. These preliminary models are then placed into a mixture of water, plaster, grit and crushed up old mold mix (hard work to mix by hand!). 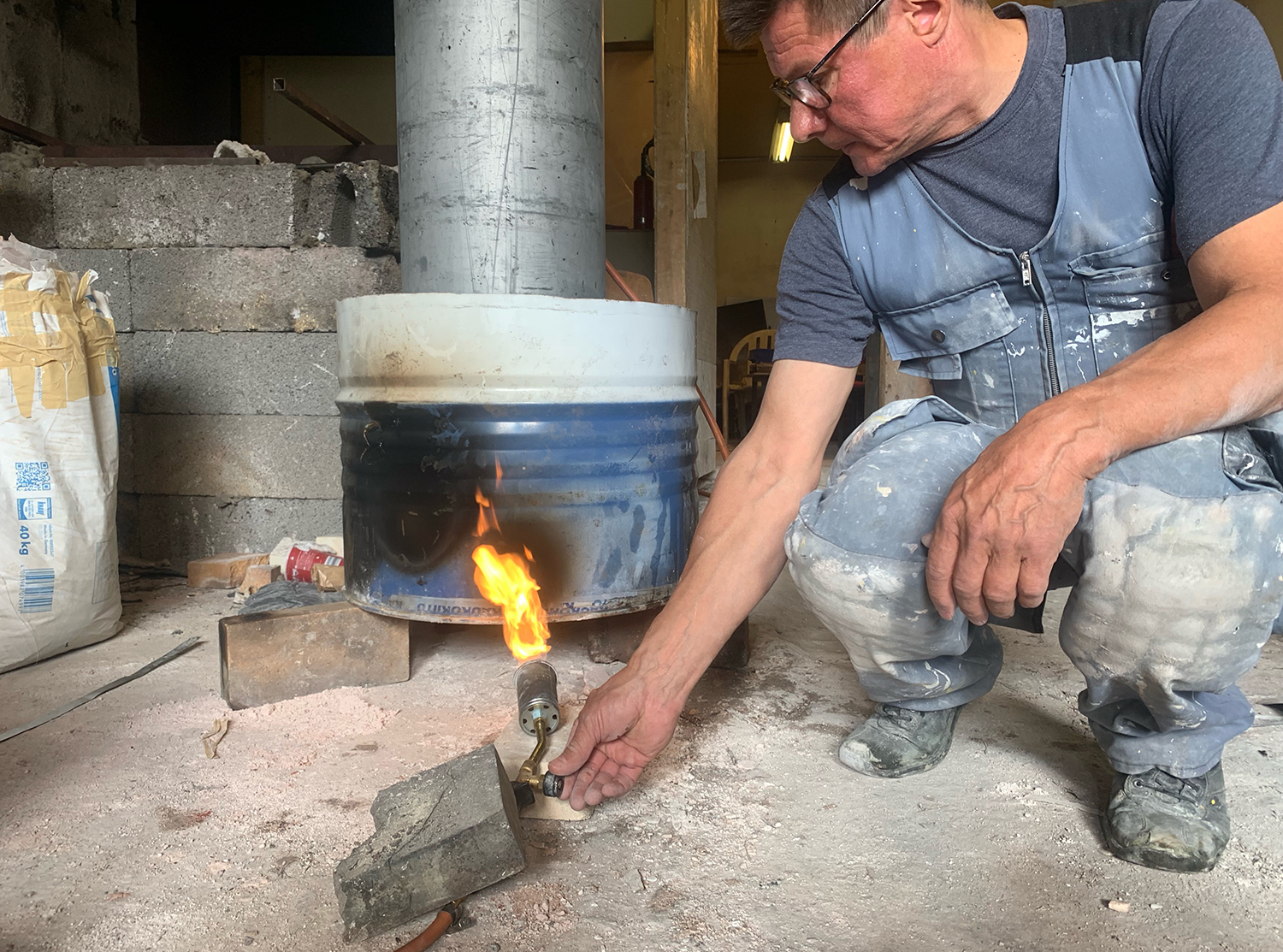 Step 2: Firing the molds Once the molds set, they are fired for 8 hours reaching a steady temperature of 700 degrees Celsius or 1472 degrees Fahrenheit. Once the molds cool down, the bronze can be poured in. Where did all the bronze come from? Forks, broken hammers, and such things… At Siberia everything is DIY. 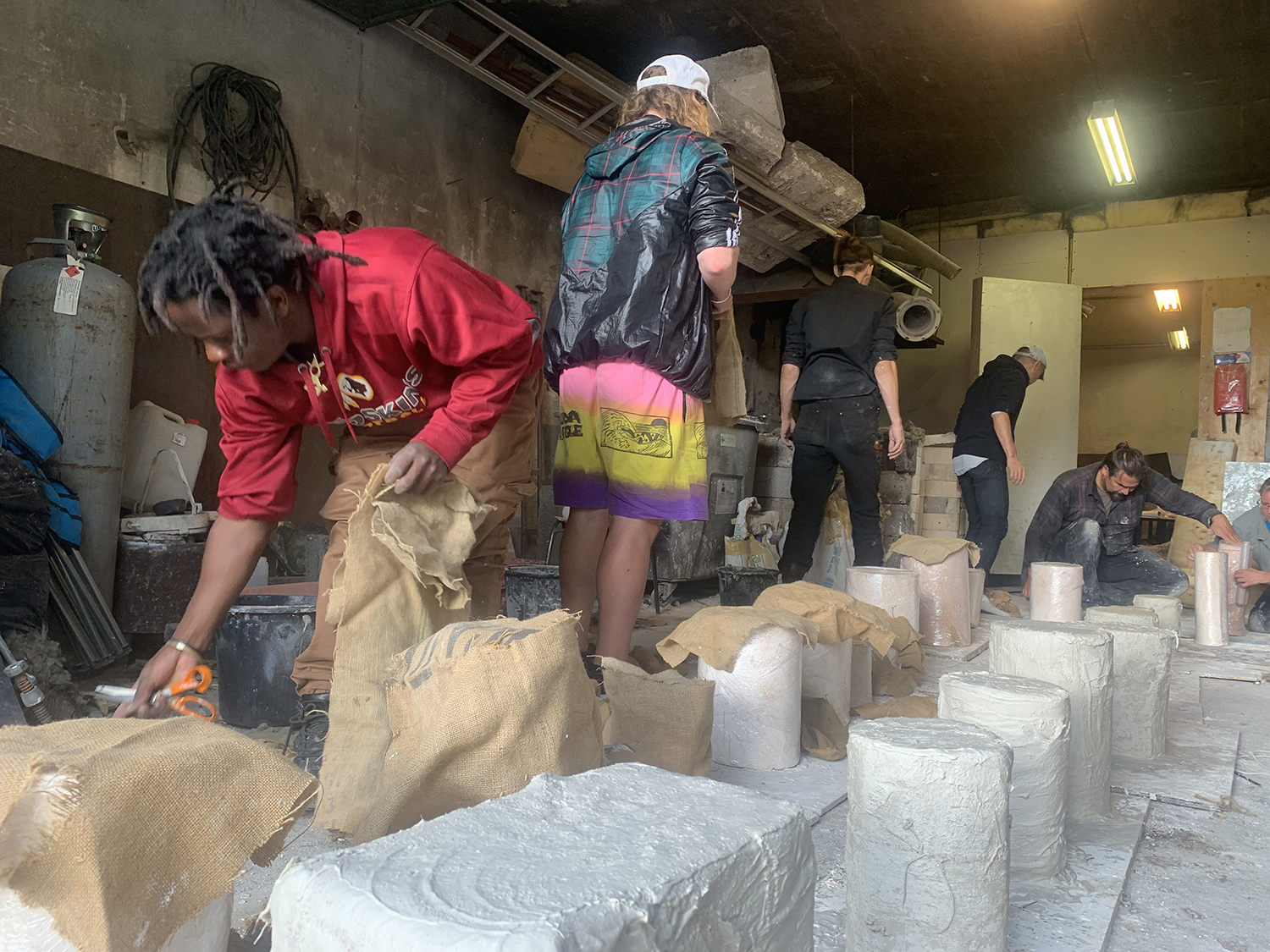 Step 3: Mold plastering Outside, a small oven heated up to 2000 degrees Fahrenheit melting bronze into liquid. Inside, the CTG Collective unpacked their molds from the oven 38 hours later. Preparing for the bronze to be poured, we wrapped our molds tightly in plastic to keep moisture out, and added a final layer of plaster and burlap. Once the plaster set, we were ready for the lava-like bronze! 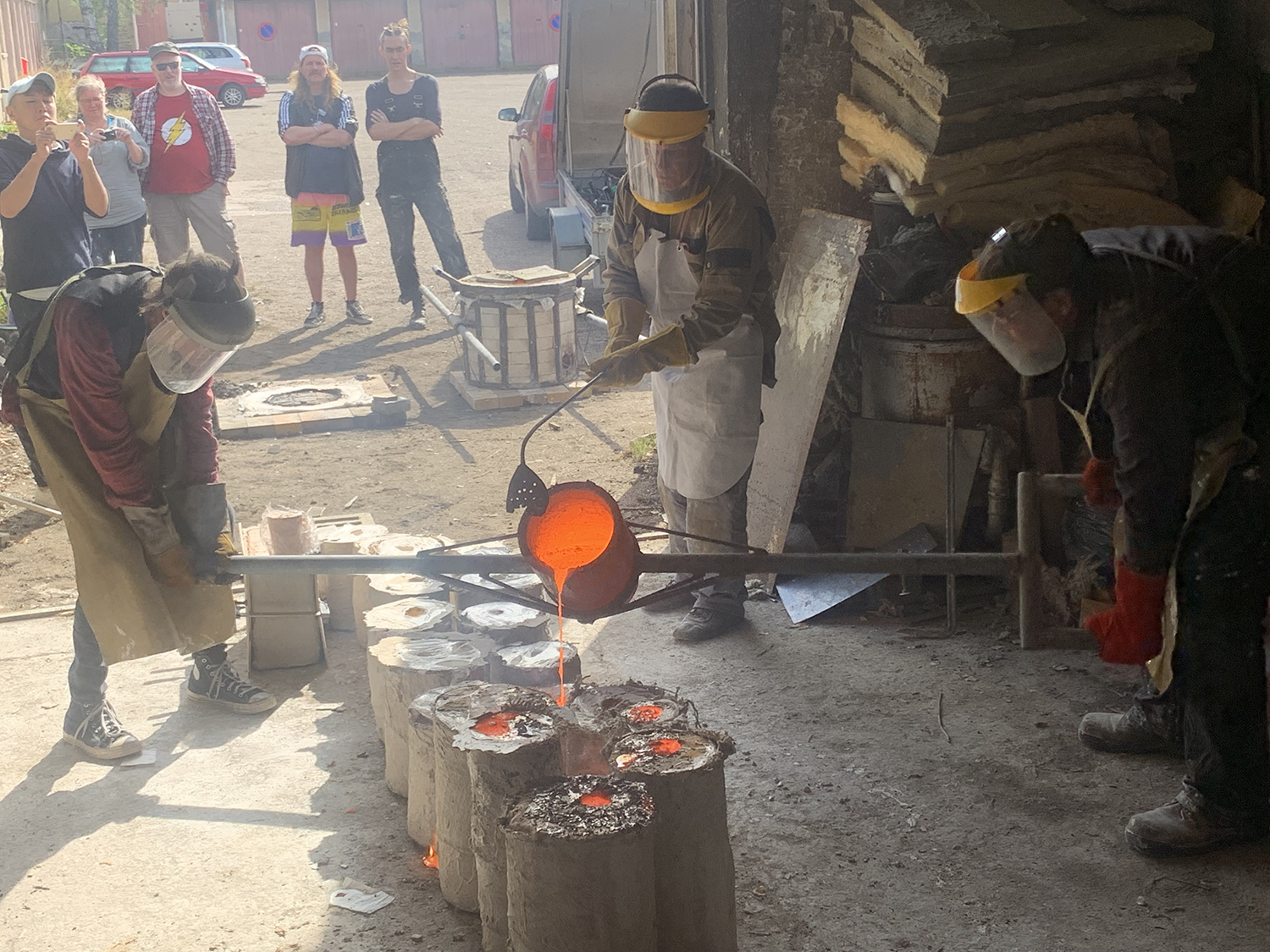 Step 4: Pouring the liquid bronze Once the bronze filled each mold it was an hour and a half wait before cutting open the one-time-use molds. With a hatchet and a little brute force we opened the plaster casings revealing our bronze sculptures inside.

Final Step: Polish! A week later, this arduous process finally came to an end. Each work was hand polished to gleam gold.